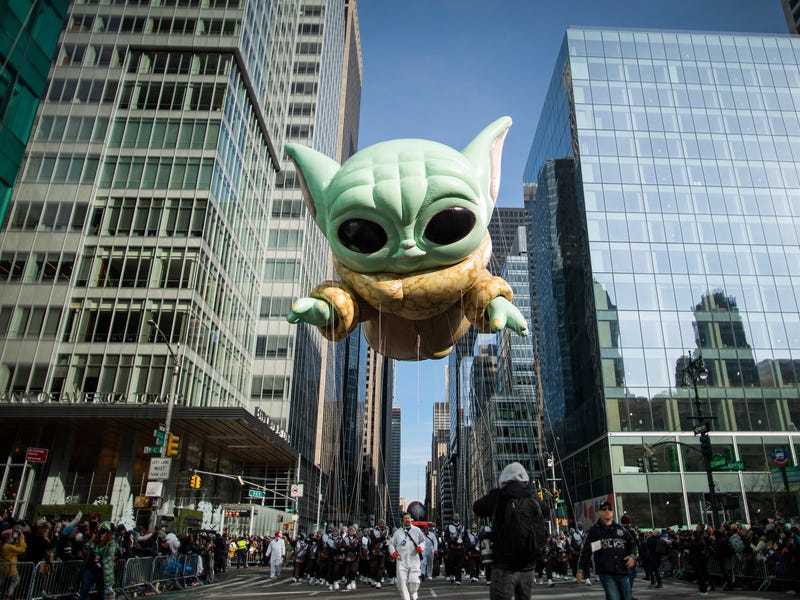 Giant balloons once again wafted through miles of Manhattan, high school and college marching bands from around the US were back and so were the crowds at the Macy’s Thanksgiving Day Parade in New York.

After being crimped by the coronavirus pandemic last year, the holiday tradition returned in full on Thursday, though with precautions.

“It really made Thanksgiving feel very festive and full of life,” Sierra Guardiola, a 23-year-old interior design firm assistant, said after watching the spectacle in a turkey-shaped hat.

To President Joe Biden, the parade’s full-fledged return was a sign of renewal, and he called NBC broadcaster Al Roker on-air to say so.

“After two years, we’re back. America is back. There’s nothing we’re unable to overcome,” Mr Biden said over the phone from Nantucket, Massachusetts, where he was watching the broadcast with his family.

Parade staff and volunteers had to be vaccinated against Covid-19 and wear masks, though some singers and performers were allowed to shed them.

There was no inoculation requirement for spectators, but Macy’s and the city encouraged them to cover their faces.

Asahi Pompey said she made a point of getting her vaccine booster shot on Wednesday and wore a mask while in the crowd, but Covid-19 concerns could not keep her away.

“It’s like the whole spirit of New York has come and gathered so we can be together,” added her school age son Sebastian Pompey-Schoelkopf.

Last Thanksgiving, with no vaccines available and the virus beginning a winter surge in the nation’s biggest city, the parade was confined to one street and sometimes pre-taped.

Most performers were locally based, to cut down on travel, and the giant balloons were tethered to vehicles instead of being handled by volunteers.

No spectators were allowed.

The 26-year-old teacher was at the event for the first time.

“The energy is crazy, and the crowd was amazing,” she said.

The event came days after an SUV driver ploughed through a Christmas parade in suburban Milwaukee, killing six people and injuring more than 60.

Authorities said the driver, who has been charged with intentional homicide, was speeding away from police after a domestic dispute.

Inside the barricades, new balloon giants joined the line-up, including the title character from the Netflix series Ada Twist, Scientist; the Pokemon characters Pikachu and Eevee on a sled (Pikachu has appeared before, in different form), and Grogu, aka Baby Yoda, from the television show The Mandalorian.

Sloan Brown, six, took it all in from a pavement and summed up the experience in a word: “Cool.”