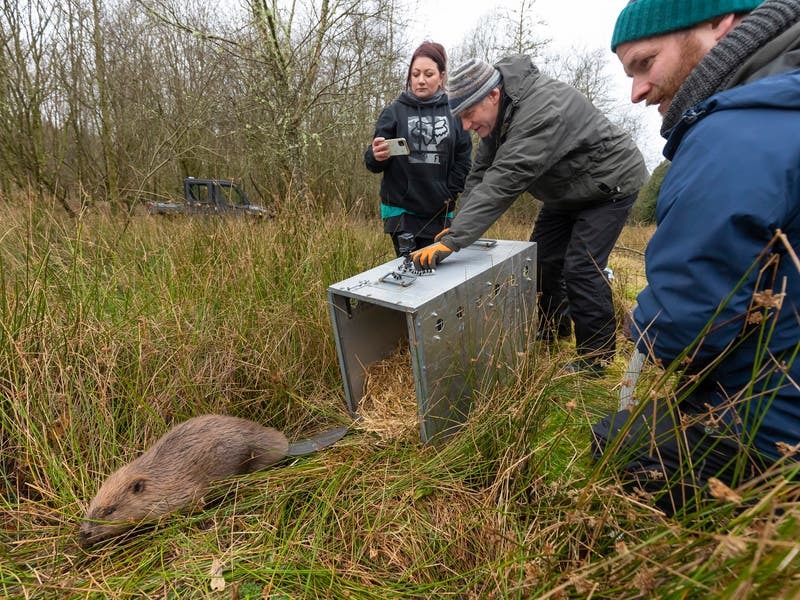 A family of beavers have been saved from culling and moved to a private family farm in a “moment of wildlife history”.

The move came after the Scottish Government last week announced that it would support translocation of beavers to new areas of Scotland to help boost numbers of the animals.

The Argaty Red Kites centre near Doune said it welcomed two adult beavers and three kits from agricultural land in Tayside, where NatureScot had issued beaver-killing licences to prevent damage to farmland.

Charity Beaver Trust carried out the translocation on Monday after NatureScot approved Argaty’s application to spare the animals and have them moved to select ponds on the Argaty estate instead.

“It will be so exciting to see how they enhance biodiversity on our farm.

“Hopefully this moment of wildlife history has helped open the door for more relocations of beavers to areas of Scotland where they are needed and wanted.

“Prioritising non-lethal management when beavers have impacts on farmland will be a big win for wildlife, farmers, and for our hopes of tackling the nature and climate crises.”

Scottish ministers said last week that they will support translocation, which involves safely trapping and moving beavers to a more suitable area, which will help establish the animals’ presence outside their current range.

Beaver dams are said to create nature-rich wetlands that benefit many other species, including amphibians, invertebrates and fish, and which also improve water quality, reduce downstream flooding, and soak up carbon dioxide.

“Beavers can be a vital ally in the fight against biodiversity loss, and responsible translocations are an important tool for allowing Scotland to expand its beaver population while sensitively managing impacts on farmland.”

Recent NatureScot figures estimate the beaver population in Scotland at between 602 and 1,381 animals, with a rough median estimate of 954 beavers across 254 territories, mainly in the Forth and Tay catchment areas.

Figures published by NatureScot show that 115 beavers were killed and 31 relocated elsewhere in 2020.

Last week’s Scottish Government announcement delivers a commitment made in the co-operation agreement between the Scottish Green Party and the SNP.

The Scottish Greens welcomed the move, which they said means beavers will be translocated within Scotland rather than killed.

A NatureScot spokeswoman said: “We are delighted the first family of beavers have been successfully translocated to Argaty. Beavers can have positive impacts by creating habitats such as ponds, canals and wetlands where other species thrive.

“Their dam-building can help moderate water flows and improve water quality, while selective felling of trees by beavers creates regrowth and diversity in our waterside woodlands.

“This, alongside the Scottish Government’s decision that we can now relocate beavers to new areas outside their current range, is another significant step towards restoring Scotland’s biodiversity and responding to the climate emergency.

“While we expect the released beavers will bring many benefits and strengthen the beaver population in the Forth catchment, we wish to reassure land and fisheries managers they can contact NatureScot for advice and practical support.”