Spirit of Thatcherism can help level up the North, says Gove 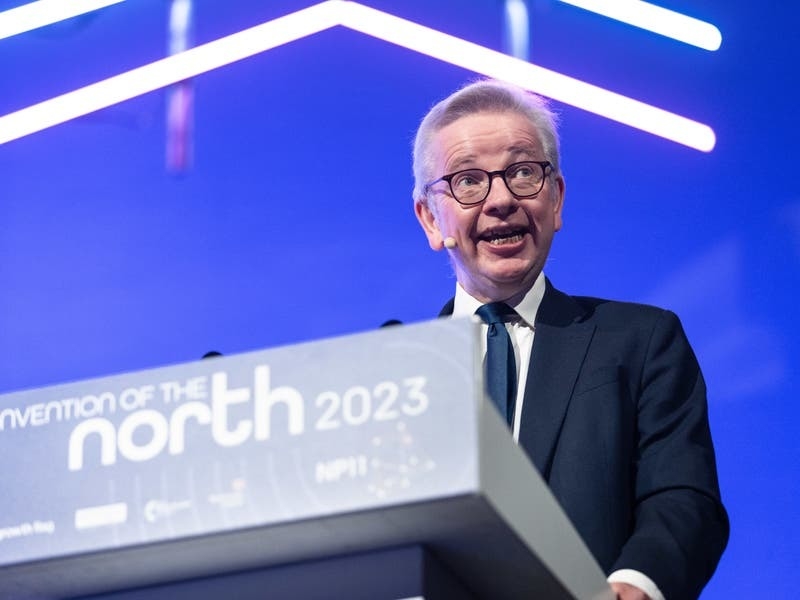 Levelling up minister Michael Gove has promised to harness the “spirit” of Thatcherism to help the North of England.

Mr Gove cited the “active” government of Margaret Thatcher and her 1980s transformation of the London docklands as inspiration for levelling up – the plan to narrow economic and social disparities between the North and South.

The Secretary of State for Levelling Up, Housing and Communities was speaking at the Convention of the North, a major gathering of political and business leaders in Manchester.

Other guests include the Mayor of Greater Manchester, Andy Burnham, Oliver Coppard, Mayor of South Yorkshire, Tracy Brabin, Mayor of West Yorkshire, Steve Rotheram, Mayor of the Liverpool City Region, and Jamie Driscoll, Mayor of the North of Tyne.

Mr Gove made passing reference to the “lively comment” last week around claims the allocation of more than £2 billion in taxpayers’ money for levelling up was being skewed towards relatively affluent areas, where Tories are the sitting MPs.

Mr Gove said he was no supporter of “inevitable and continuing” state expansion, but failure to deal with inequalities between the North and South would lead to more welfare dependency, social problems and pressure on the NHS and the public purse.

He cited Margaret Thatcher’s administration in the 1980s, a decade marked by the closure of coal mines and industrial strife in the North, as a model for elements of levelling up.

He said: “And the experience of successful economic transformation demonstrates that growth is not secured by absent government but by active government.

“When the Thatcher government took office in 1979, London’s docklands were a derelict economic desert.

“The original vision for re-generation of the area, from the Treasury of the time, was simple: just cut taxes and de-regulate and a thousand flowers will bloom in the dusty and contaminated soil of the docklands.”

But he said Mrs Thatcher helped set up deeper government intervention through the London Docklands Development Corporation, bringing jobs and housing and transforming that area of the capital.

He said: “Government created the environment, the private sector created the jobs. London Docklands today is an economic success story.

“One of the most signal successes we owe to Mrs Thatcher’s government, and it is that spirit that animates our levelling up policies: active government.”

Mr Gove likened the way the UK’s political economy had been run in the past, reliant on London and the South East, to a failing football team, which had let the country down.

He said: “We all know we can’t prosper so much as a state if we rely so much on one region, and within that region, on one city.

“The UK economy has been like a football team with a star striker, but a midfield that consistently struggles to get the ball upfield and a defence full of holes.

“And no forward, not even Lionel Messi, can do it on his own.

“Success depends on strength in depth. We’ve been insufficiently resilient, inherently constrained by supply side weaknesses and unequal in access to power, capital and investment.”

He said his Levelling Up White Paper, released last year, aimed to meet the challenges “head on”, to create and spread growth and prosperity across the whole of the UK.

“We are reforming the shape and nature of government in England itself,” he added, “redistributing power and influence within England to strengthen cities and communities outside London, with the North benefiting most of all.”

Lisa Nandy, Labour’s shadow secretary of state for levelling up, housing and communities, is due to speak at the event later today.