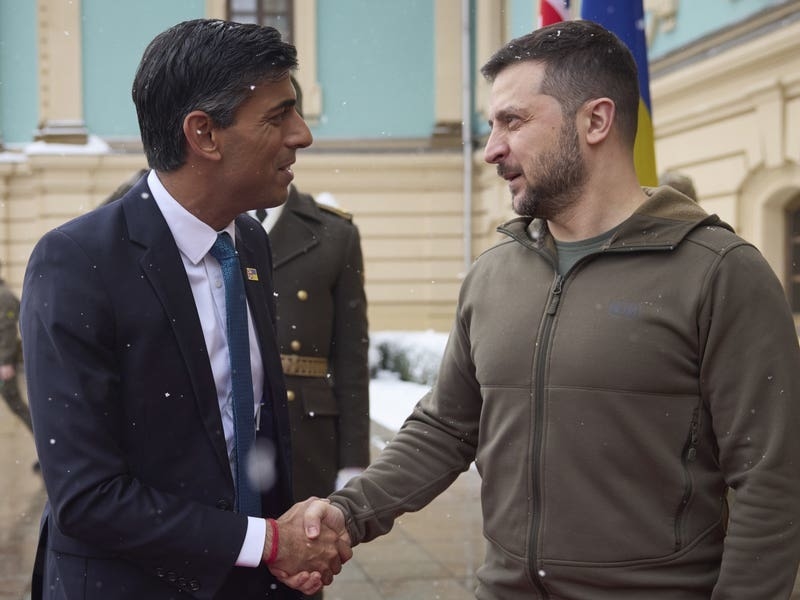 The two leaders spoke amid a series of Russian strikes on Ukraine’s energy facilities and other key infrastructure as the Kremlin said it is up to the Ukrainian president to end the war.

Downing Street said that Mr Zelensky, whose wife visited London last month, “thanked the UK for its crucial support to help restore power through the supply of generators”.

Mr Sunak also made a surprise visit to Kyiv to meet with President Zelensky in November.

“Updating on the latest lethal aid deliveries from the UK, the Prime Minister said that more anti-air guns and further short-range air defence missiles would arrive in the coming weeks,” the spokesperson said.

“Both leaders agreed on the importance of pre-empting Russia’s insincere calls for a ceasefire and the Prime Minister added that the Kremlin needed to withdraw its forces before any agreement could be considered.”

It comes as it emerged that Russia appears to have deployed a fresh supply of Iranian kamikaze drones after exhausting its stocks last month.

For the first time in three weeks, Ukraine has reported attacks by Iranian-sourced one-way unmanned aerial vehicles (UAVs), according to an intelligence update from the UK’s Ministry of Defence (MoD).

Ukrainian general staff reported shooting down 17 UAVs on December 6 and officials said drones were used the following day to target the regions of Zaporizhzhia and Dnipro.

The MoD stressed that the events remain to be verified, but it is likely that Russia had exhausted its previous stocks and has now received a fresh supply.

The UK has pledged a £50 million package of defence aid comprising 125 anti-aircraft guns and technology to help Ukraine counter Iranian-supplied drones, including radars and anti-drone equipment.

Britain has also sanctioned Iranian individuals and firms linked to the supply of the UAVs.

Foreign Secretary James Cleverly hit out at what he called “sordid deals” between Russia and Iran, which the UK sees as a threat to global security.

He said: “Iran is now one of Russia’s top military backers.

“Their sordid deals have seen the Iranian regime send hundreds of drones to Moscow, which have been used to attack Ukraine’s critical infrastructure and kill civilians.

“In return, Russia is offering military and technical support to the Iranian regime, which will increase the risk it poses to our partners in the Middle East and to international security.

“The UK will continue to expose this desperate alliance and hold both countries to account.”