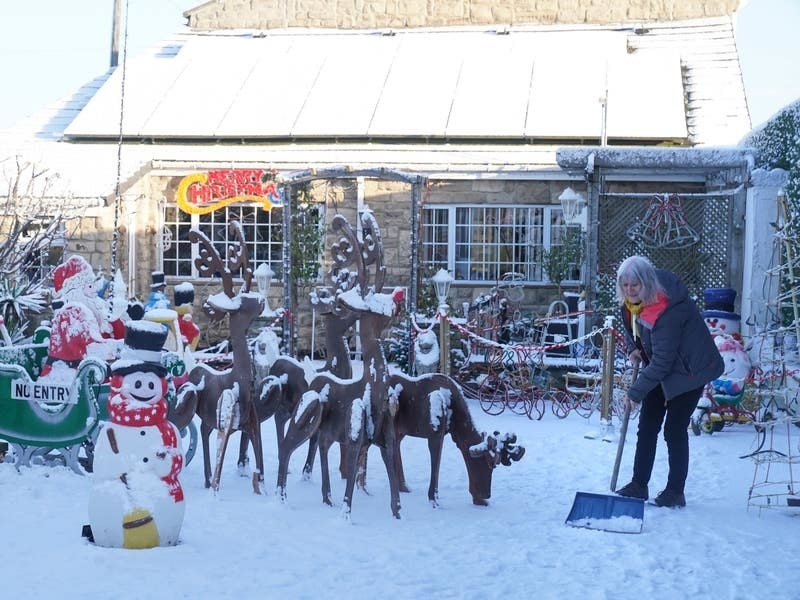 The UK will see at least another seven days of arctic weather, in which temperatures could plummet to as low as minus 10C, wintry downpours and “freezing fog”.

On Friday, the Met Office issued a yellow snow and ice warning for London and south-east England on Sunday and Monday after identical warnings in other parts of the country.

The new warning, which lasts for 24 hours, says two to five centimetres of snow could fall quite widely and up to 10cm in places.

It says there is a chance of travel delays on roads, trains and planes, as well as power cuts and injuries from slips on ice, while communities could be “cut off”.

Met Office spokesman Grahame Madge said: “The outlook for the UK remains cold at least for the next seven days, with the potential for this to continue even longer.

“At the moment the air mass which is feeding the cold conditions is coming from a northerly direction, even with an Arctic influence.

“Along with the cold air there are a number of weather-related hazards including freezing fog, especially for Sunday and Monday mornings in the south of England.

“Overnight temperatures are likely to dip widely below zero with some more sheltered spots dropping to minus 10C.

“Our forecasters are looking at the possibility of snow affecting the south east of England on Sunday night and into Monday morning. If this happens it could bring some disruption to Monday’s rush hour.”

Meanwhile, just over 3,200 warm banks, run by local authorities and charities to provide heating to those who cannot afford to heat their homes, are open across the UK, according to the Warm Welcome Campaign.

It said many of them are a third or even half full and offer a variety of services, from hot tea to a place to work.

Isobel Hunter MBE, chief executive of Libraries Connected, the national membership body for public libraries, said: “The vast majority of our member libraries are part of a warm spaces scheme and as the severe cold weather spreads, many are reporting a spike in demand. They are expecting that to increase over the coming days as the weather worsens.”

“Public libraries are often at the heart of local winter support plans. As well as a warm space and a warm welcome, many of our members will be offering additional services such as hot drinks, warm clothes and advice on managing bills, often in partnership with local charities.”

Charity Save the Children said 194 of 355 councils in England and Wales are directly involved in or supporting local groups to open warm spaces this winter.

Becca Lyon, head of child poverty at Save the Children UK, said: “Families should not be in a position where they are agonising over whether to put the heating on in sub-zero temperatures.

“One mum told us how her children are sleeping under two duvets. Another is putting extra clothes on their children inside the house and another is using seven hot water bottles to keep her family warm.

“One mum who works full-time said she cannot afford sanitary products this month because her bills have wiped out her income.”

Councillor Richard Wenham, vice-chairman of the Local Government Association’s Resources Board, said: “Warm hubs and other similar schemes are among the many actions councils are taking to support people in the greatest need this winter, but these emergency schemes should not become the norm and are not a sustainable solution to bridge the gap between income and the current cost of living.”

The Government payments have been triggered for eligible households in areas where the average temperature has been recorded as, or is forecast to be, 0C or below over seven consecutive days.

Elsewhere, the breakdown rescue firm RAC said Thursday was an “exceptionally busy day for patrols”, with a quarter more breakdowns across the UK than is “normal” for the time of year.

Spokesman Rod Dennis said: “If anything, we’re expecting today to be even busier as many people – including students – use their cars to get away for the weekend or take a day off to do their Christmas shopping.

“It’s a picture that’s going to continue into the weekend and next week as the cold snap continues.

“It’s vital that drivers make sure their cars are ready for the conditions to limit the risk of breaking down in the low temperatures, and this weekend is an ideal time to do check over their car’s tyres as well as oil, coolant and screenwash levels.

“Anyone embarking on a longer journey should pack a winter kit they can use if the worst happens, which should include plenty of warm clothing layers for all passengers, a flask of warm drink, as well as food, water and a powerbank for keeping a mobile phone charged.”