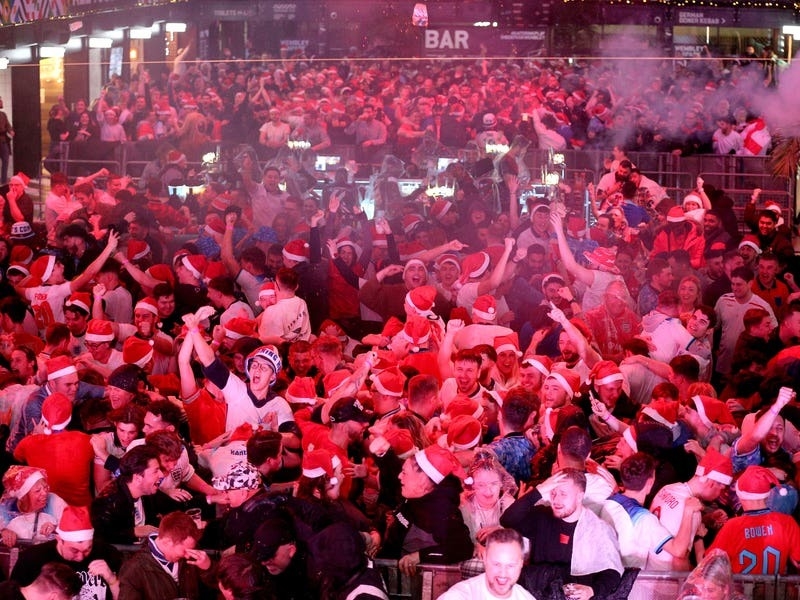 Santa hats were sent flying and England fans were left dreaming of World Cup glory after a comprehensive 3-0 win over Senegal set up a quarter-final tie with holders France.

Supporters who had made the trip to Qatar said they were “loving every minute” of England’s journey in the competition, with one optimistic fan predicting a penalty shootout win in the next round.

Concerns were aired after the game after news emerged that the home of winger Raheem Sterling had been broken into by armed intruders.

Despite a cagey opening 30 minutes against Senegal on Sunday, Liverpool captain Jordan Henderson calmed any England fears before Harry Kane’s goal on the stroke of half time saw beers thrown into the skies at fan parks across the nation.

A composed second-half Bukayo Saka finish rounded off another professional display, prompting a chorus of “football’s coming home” at the Croydon Boxpark in south London.

Three Lions supporters at the match admitted there were nerves ahead of kick-off as they were greeted by a carnival atmosphere of dancing Senegalese fans ahead of their crunch World Cup knockout game.

Labour leader Keir Starmer took to Twitter to say next week’s quarter-final will be a “huge game”, adding: “But is anyone else starting to believe that it might be coming home…?”

England fans Joe Hawkins and Sean Firmin, both aged 30 and from Middlesbrough, arrived in Qatar on Sunday morning, came straight to the Senegal game and have secured tickets for the quarter-final with France.

IT consultant Mr Hawkins, speaking outside the Al Bayt Stadium, said the first 30 minutes against Senegal were “tough going”, but felt the two goals before the break helped kill the game.

He told the PA news agency: “Jude Bellingham was the best player on the pitch – outstanding, wasn’t he?”

Radiographer Mr Firmin had predicted a 3-0 win against Senegal, adding of France: “I reckon it’ll be after extra time, I reckon it might go to penalties and I reckon we’ll do it on pens.”

The England fan told PA: “I’m loving every minute of it.”

She added: “It was really stressful but when those first two goals went in I relaxed a bit and the third one that was it, we knew we were going through.”

Asked if she was daring to dream, Ms Sibley replied: “Absolutely, my mum and dad have come over from England, so we’d love them to bring it home.”

England fan Karen Barham, 60, had admitted to being nervous ahead of the Senegal game but was relieved after the full-time whistle, despite a “very, very uncomfortable” opening 30 minutes.

“The first 30 minutes was very, very tense and edgy and then (Jordan) Henderson is a quite unlikely goalscorer, but once we got one on the clock and then (Harry) Kane just in that added time before half-time, (Senegal) didn’t really do anything after.”

Ms Barham said there were “loads of positives”, including the clean sheet, adding: “For the people going home tomorrow they’re delighted England have got through but it’s tinged with that ‘oh god, I wish I was staying’.

“For those of us who think ‘I should now apply for settled status’ here because I’m out for the duration.”

Ms Barham said she will have to do some work from her accommodation to keep her clients happy, adding: “In his steady, workmanlike way, Gareth (Southgate) is delivering and so far we’ve done the job.”

Back in the UK, fans were full of praise of England youngster Jude Bellingham.

Adam Davison, 30, a mentor for children with autism who travelled from his home in Northamptonshire to watch the match at Croydon Boxpark with friends, said Bellingham was his man of the match “by a country mile”.

He added: “For such a young man, he has so much talent and maturity. He just dominated the pitch.

“He is a future captain of England. He has got so much confidence for a young lad.

“He drove down the midfield. He did not score, but that first goal would not have happened if it wasn’t for him.”

Minutes before the final whistle blew, supporters were chanting “England, England” at the south London venue.

White confetti was released as the game ended, and fans erupted into loud cheers, jumped together in celebration and punched the air.

Elsewhere, fans at The Eastney Tavern in Southsea, Hampshire, clapped and cheered as the final whistle blew.

After watching the match, regular Mark Ellinor said of England: “I think they have got it in them, they are a really strong side and we have a good chance of winning the whole thing.”