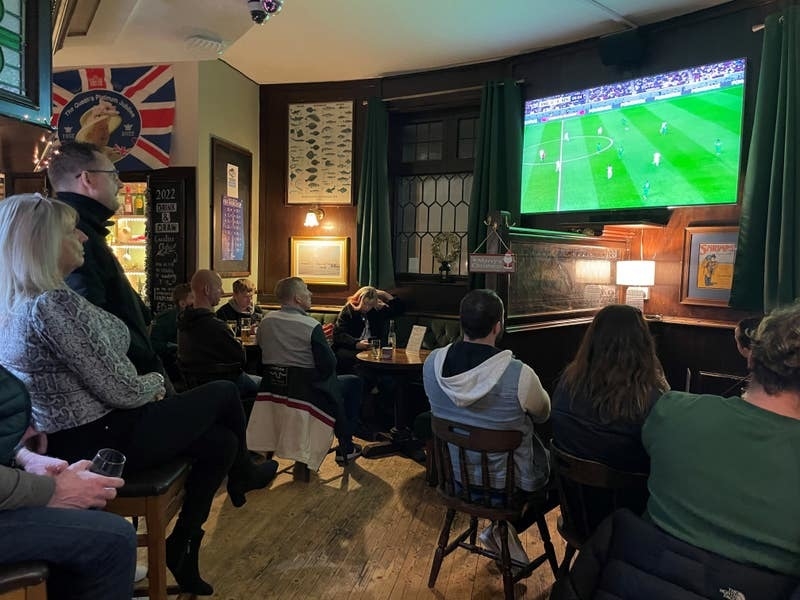 The evening at The Eastney Tavern started with a moment of silence as the national anthem rang around the Al Bayt Stadium in Qatar.

Mark Ellinor, 55, said he was excited to watch the match following the build-up during the week.

He told the PA news agency ahead of the game: “I’m feeling confident, 2-1 to England, I am excited to see the match, I think they have a really good chance, you have to be positive.”

And his friend Matt added: “As long as they play with ambition rather than a cagey defence, I am sure they will get at least a 2-0 win.”

Robyn Sharpe, who has only worked at the pub for three weeks, said the World Cup had brought some excitement to the pub, apart from the match against the USA.

She said: “When we are winning it’s great, everyone is happy and excited, but during the USA game, it was a bit boring and everyone just went home quietly afterwards.

The atmosphere stayed quiet for most of the first half, the tension only relieved when England broke the deadlock with the first goal.

Regular Joel said: “Thank goodness for that. I was expecting lots of goals, let’s hope for some more.”

And after the second goal just before half time, he added: “Here we go.”

At the final whistle, the drinkers cheered and whooped over England’s victory.

Mr Ellinor said of the national side: “I think they have got it in them, they are a really strong side and we have a good chance of winning the whole thing.

“It was a bit of a slow start but I think we will progress.”

Another regular, John, said: “We got lucky in the first half, it hasn’t been the most exciting game, but it’s a win, that’s what matters.”

And Joel added: “Well, that was a comfortable win in the end, just as I hoped for.”

Meanwhile, things got very noisy at the Croydon Boxpark in south London where Santa hats were thrown in the air in celebration of England’s goals.

Fans roared and rose to their feet as Jordan Henderson scored England’s first goal against Senegal.

They all then burst out in loud voice singing: “I am England until I die.”

And as England skipper Harry Kane scored the team’s second goal just before half-time, in one giant burst the England supporters all jumped to their feet, screamed and hugged.

The St George’s flags which had been draped over the shoulders of some fans were raised in the air in celebration.

White confetti was released as the game ended with a 3-0 England victory against Senegal in the World Cup last 16.

The supporters erupted into loud cheers, jumped together in celebration and punched the air.

The Boxpark became the temporary headquarters of the Jude Bellingham appreciation society during the match.

Fans said they were impressed by how the teenager “worked his socks off”, particularly in the first half.

Designer Pete Tomlinson, 31, who is originally from Bournemouth, said: “Bellingham – he is just the man. He was a knockout. He did not get on the scorecard but England would not have scored so many goals if it wasn’t for him.”

Mr Tomlinson added: “The first 25 minutes or so of the match was kind of cagey.

“I did not see Senegal posing any threat after we got that first goal. It was all England by half time.”

After the victory, which set up England for a quarter-final clash with France, security worker Hamdan Mann, of Thornton Heath, south London, said: “I am quite happy with that result.”

Mr Mann thought there would be more goals and that Jude Bellingham was England’s best player in the game.

He said: “He (Bellingham) was just dominating the ball. He was impressive and was making chances. It is that sort of intensity that I want to see from our players.”

England will need that intensity in their next match against France, Mr Mann said, because “we need to be more consistent”.

Adam Davison, 30, a mentor for children with autism who travelled from his home in Northamptonshire to watch the match with friends, said Bellingham was his man of the match “by a country mile”.

He added: “For such a young man, he has so much talent and maturity. He just dominated the pitch.

“He is a future captain of England. He has got so much confidence for a young lad.

“He drove down the midfield. He did not score, but that first goal would not have happened if it wasn’t for him.”

Mr Davison said England were “sluggish” in the first 25 minutes but went on to assert their dominance against Senegal.

He added: “But, to be honest, we should be dominant against Senegal and should have played better.”