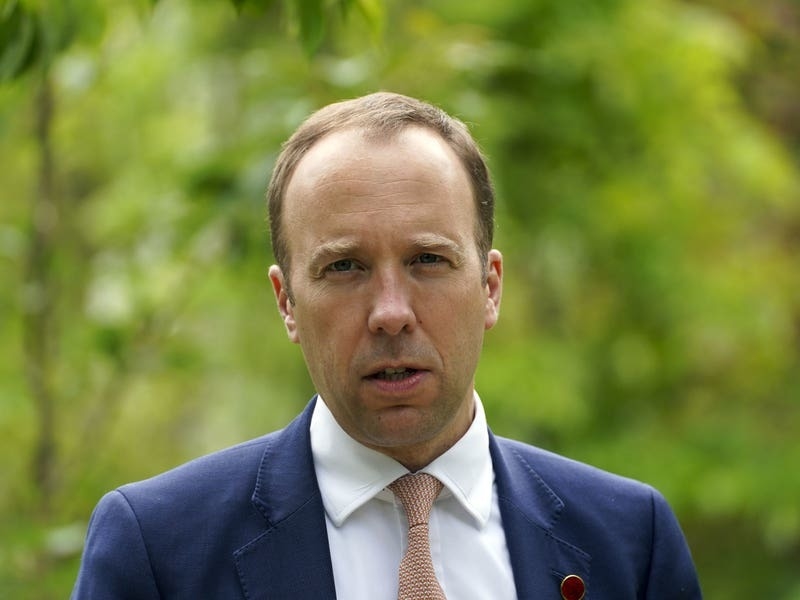 Matt Hancock has said he was warned the Covid pandemic could kill hundreds of thousands of people in the UK two months before the Government put the country into lockdown.

The former health secretary said the chief medical officer for England Professor Sir Chris Whitty had informed him in January 2020 that in a “reasonable worst case scenario” as many as 820,000 could die.

However, he said that when he passed on the warning to fellow ministers at a Cabinet meeting three days later, the reaction was “shrug shrug” as they did not really believe it.

The details are revealed in Mr Hancock’s Pandemic Diaries: The Inside Story Of Britain’s Battle Against Covid, serialised in the Daily Mail and The Mail+.

In the book, Mr Hancock said Sir Chris had warned him on January 17 that there was a “50:50 chance” that the virus, which had broken out in China, would reach Britain.

Eleven days later, at a meeting with officials, Sir Chris spelled out what that could mean.

“In his characteristically understated way, sitting at the back peeling a tangerine, Chris Whitty quietly informed everyone that in the reasonable worst-case scenario as many as 820,000 people in the UK may die. The transmission is so high that almost everyone would catch it,” he wrote.

“The whole room froze. We are looking at a human catastrophe on a scale not seen here for a century.”

However, when he shared the forecast with a Brexit Day meeting of the Cabinet in Sunderland on January 31, Mr Hancock said it was met largely with indifference.

“The reaction was somewhat ‘shrug shrug’ – essentially because they didn’t really believe it. I am constantly feeling that others, who aren’t focused on this every day, are weeks behind what’s going on,” he said.

Mr Hancock suggested that Boris Johnson had been reluctant to engage on the issue.

A month later he said he warned Mr Johnson that while it might still be possible to contain the virus, it was “more likely we’re going down”. The reply, he said, was simply: “Bash on.”

He said Mr Johnson’s attitude was shared by his chief adviser Dominic Cummings who thought Covid was “a distraction from our official withdrawal from the EU next week. That’s all he wants Boris talking about”.

Mr Hancock also defended his handling of one of the most controversial episodes of the pandemic – the decision to release care home residents from hospital without testing, which was blamed for thousands of deaths.

He said the then chief executive of NHS England Sir Simon (now Lord) Stevens had been pushing for elderly hospital patients who did not need urgent treatment to be discharged.

On April 2, he noted: “The tragic but honest truth is we don’t have enough testing capacity to check anyway. It’s an utter nightmare, but it’s the reality.”

In mid-July, he said he received a ‘startling note’ in his ministerial red box suggesting most cases in care homes were brought in by staff with the virus whose managers allowed them to continue working – something he later describes as “scandalous”.

The West Suffolk MP, who now sits as an independent having had the Tory whip withdrawn for going off to the Australian jungle while Parliament was sitting, was speaking in support of his Private Member’s Bill to introduce screening for dyslexia.

Dressed in a blue suit and a pink tie, he told MPs that it was “a pleasure to be here and to be clean and well-fed”.

His Bill however ran out of time and is now unlikely to make it into law in its present form.