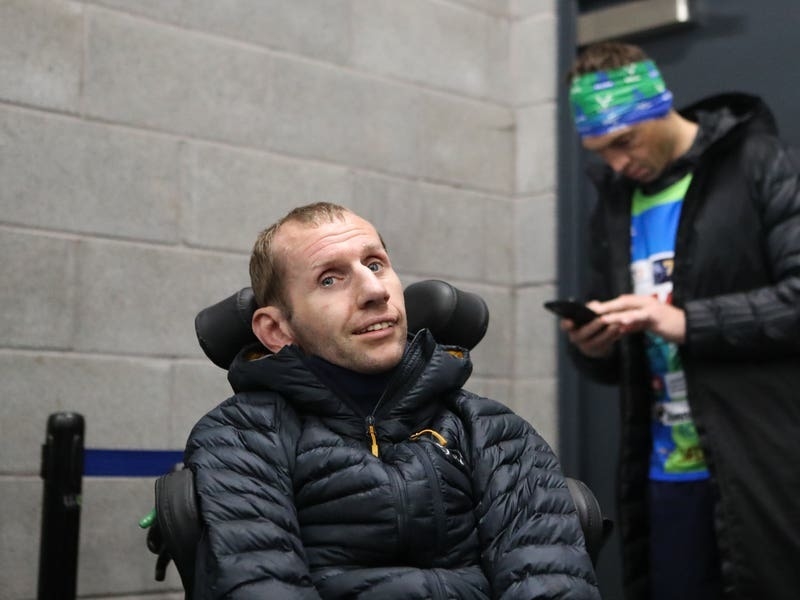 Rob Burrow has criticised the “stupid” Government over funding for those with motor neurone disease, as he paid tribute to rugby player Doddie Weir following his death.

The former Leeds and Great Britain scrum-half, who is now confined to a wheelchair because of the disease, praised Weir for his work in helping to raise funds for MND research, calling him a “friendly giraffe”.

Burrow said on Twitter: “So sad to hear the news of the passing of my MND hero Doddie Weir.

“I’m sorry to say, how many more warriors die before this stupid government give the (£) 50m they said they would give.

“I’m absolutely gutted to see my friendly giraffe die. You are the reason for being so positive RIP.”

In November 2021 the Government committed at least £50 million to help find new therapies, and eventually a cure, for MND, a condition in which the brain and nerves progressively degenerate.

Rob Burrow’s comments came as another rugby player said it was the “ultimate honour” for former Scotland international Weir to be present when he began a challenge which raised more than £2 million.

Former Leeds Rhinos player Kevin Sinfield, 42, began his Ultra 7 in 7 Challenge, to run from BT Murrayfield in Edinburgh to Old Trafford in Manchester, two weeks ago, in a bid to raise £777,777 for five motor neurone disease charities.

Weir, who was diagnosed with MND in December 2016 and went on to found a research foundation, for which Sinfield raised money, made a rare appearance at the Scotland national stadium on November 13.

Sinfield, who had raised just under £2.1 million by the time of Weir’s death on Saturday, was inspired by the Scottish rugby international, as well as his former Leeds Rhinos team-mate Rob Burrow and ex-Bradford City captain Stephen Darby, who all live with MND.

“With his trademark smile, he insisted that he wanted to be there with his new pink trainers on.

“The fact that a proportion of the money raised from the Ultra 7 in 7 will go to the foundation set up by Doddie has particular poignancy, as we look to continue his legacy on in the years ahead.

“I am honoured to have been able to call Doddie my friend and I know his spirit lives on in all of us who knew him. He will always be a champion.”

On November 19, he completed his seven back-to-back ultra-marathons, arriving at the Rugby League World Cup final at Old Trafford to a standing ovation.

The proceeds will mainly benefit the MND Association and Leeds Hospitals Charity’s appeal to build the Rob Burrow Centre for MND in Leeds.

There will also be donations to MND Scotland, My Name’5 Doddie Foundation, the Darby Rimmer MND Foundation and the 4ED campaign, in support of former Gloucester and Leicester rugby player Ed Slater, who was recently diagnosed with the disease.

Five years ago Weir founded the My Name’5 Doddie Foundation which has now committed almost £8 million to research projects across the UK.

“He inspired us every day with his positivity and energy and was fully committed to the work of the foundation he launched with his close friends in November 2017.

“My Name’5 Doddie Foundation continues to shine a light on MND and the need to seek meaningful treatments and, one day, a cure for this devastating disease.

“The foundation has raised significant funds through the amazing efforts of our incredible supporters and has committed £8 million to MND research over this time.

“We have also given considerable funds to people living with MND and their families to help them live as fulfilled a life as possible.

“With Doddie’s enthusiasm and drive, we have collaborated with other stakeholders within the MND community and firmly established the foundation as a trusted, influential and well supported charity.”