Details of NHS services exempt from nursing strike to be set out, says union 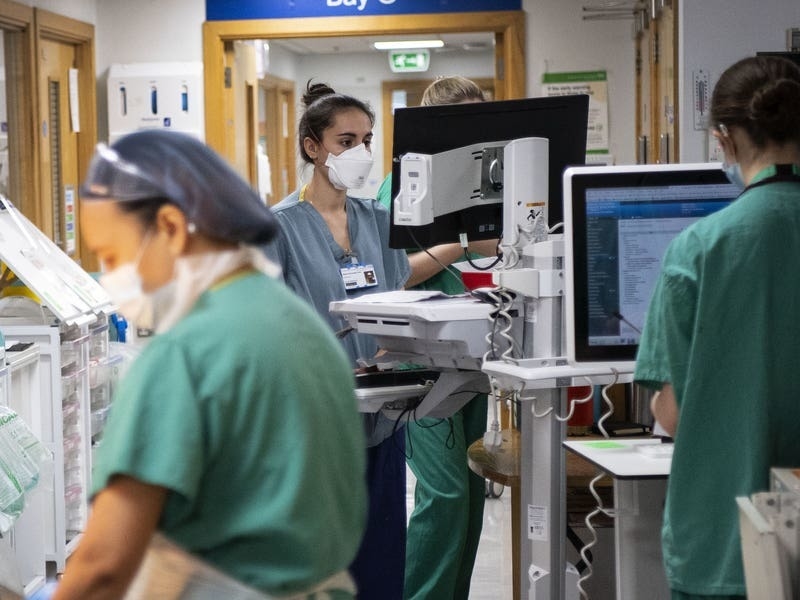 Details will be set out soon on which services within the NHS will be exempt from strike action, as the health service prepares for the likely cancellation of thousands of operations and appointments next month.

Services deemed “life-preserving” and “emergency-type care” will continue on strike days, a nursing chief said, but she declined to give exact detail about which departments would remain staffed when colleagues stage a walk-out.

On Friday, the Royal College of Nursing (RCN) announced its members will stage their first national strike on December 15 and 20 in a dramatic escalation of the pay row raging across the NHS.

RCN general secretary Pat Cullen has urged Health Secretary Steve Barclay to “stop the spin and start to speak” with nurses to avert a walkout, accusing him of having “chosen strikes over speaking to me”.

Mr Barclay has said the nursing union’s demands – which he cited as a 19.2% pay rise, costing £10 billion a year – are “not affordable”.

But Ms Cullen told BBC Breakfast she does not recognise the Health Secretary’s figures and said he had made it clear he wished to discuss “non-monetary issues” in any talks.

Both Mr Barclay and Ms Cullen insisted on Friday that their doors are open for talks.

Prime Minister Rishi Sunak said he has “enormous respect” for nurses but that the pay rise requested by the union is “obviously unaffordable”.

He told broadcasters: “What the unions are asking for, I think, is a 19% pay rise.

“And I think most people watching will recognise that that’s obviously unaffordable, and that’s why I’m pleased that the Health Secretary is sitting down, talking to the union, and hopefully we can find a way through this.”

Ms Cullen said there will be “very detailed and worked-through plans” set out soon about which services will be staffed, with a local strike committee in each organisation that has voted to take industrial action in England, Wales and Northern Ireland.

She told BBC Radio Four’s Today programme: “What we will continue to provide is life-preserving services. And those essentially fall into emergency-type care.

“But we will have very, very detailed and worked-through plans that every single nurse that is taking strike action will be expected to adhere to.”

She indicated some cancer services will be exempt, but declined to give detail when asked about scans and checks.

Asked if nurses would be on cancer wards on strike days, she said: “Services such as oncology will be derogated or exempt from any strike action. We have a number of services that we are working through at the minute that will be derogated on the day of strike, and we will release that list soon to employers.”

Pressed on scans or cancer checks such as colonoscopies, she said: “All of the detail is being worked through. Those services that are not considered life-preserving or emergency services will not be derogated. Those that do fall into those particular descriptions will be derogated.”

A previous strike in Northern Ireland saw entire services such as intensive care being exempt from strike action, while others ran a Sunday or Christmas Day service.

The RCN said it was calling strikes after the Government turned down its offer of formal, detailed negotiations as an alternative to industrial action and said it will announce which particular NHS employers will be striking next week, when formal notifications are submitted.

The RCN said that despite a pay rise of around £1,400 awarded in the summer, experienced nurses are worse off by 20% in real terms due to successive below-inflation awards since 2010.

The union said the economic argument for paying nursing staff fairly was clear when billions of pounds was being spent on agency staff to plug workforce gaps.

It added that in the last year, 25,000 nursing staff around the UK left the Nursing and Midwifery Council register, with poor pay contributing to staff shortages across the UK, which it warned was affecting patient safety.

The College maintains that surveys have shown huge public support for nurses receiving a bigger pay rise, as well as the right to take industrial action.

RCN England director Patricia Marquis apologised to patients for disruption but said it is necessary for things to change for the better.

She told Sky News: “I think we have to face the facts that a day or two of strike action really is not the issue. The issue is years and years of underfunding.”

“My door remains open to @theRCN if they want to discuss ways we can improve nurses’ working lives.”

But Ms Marquis said Mr Barclay has not been willing to discuss “the things that need to be discussed – pay and safe staffing”.

She told Good Morning Britain: “He can say his door remains open but it remains open on his terms and it needs to remain open on terms that we can all agree on. So unless he’s prepared to speak to us about the things that we’re in dispute over, his door is shut.”

Labour chairwoman Anneliese Dodds told Sky News the planned nurses’ strike is a sign of “gross negligence” by the Tories, but she would not be drawn on whether her own party would meet demands for inflation-busting pay rises.

Other health unions are also balloting workers for industrial action, while ambulance staff in Scotland are due to walk out on Monday.

A ballot among hundreds of thousands of Unison members closes on Friday, and among Unite’s NHS members next week.

Midwives and physiotherapists are also voting on strikes, while a ballot of junior doctors opens in the new year.