Sheku Bayoh inquiry: Backing off would have been better approach – ex-inspector 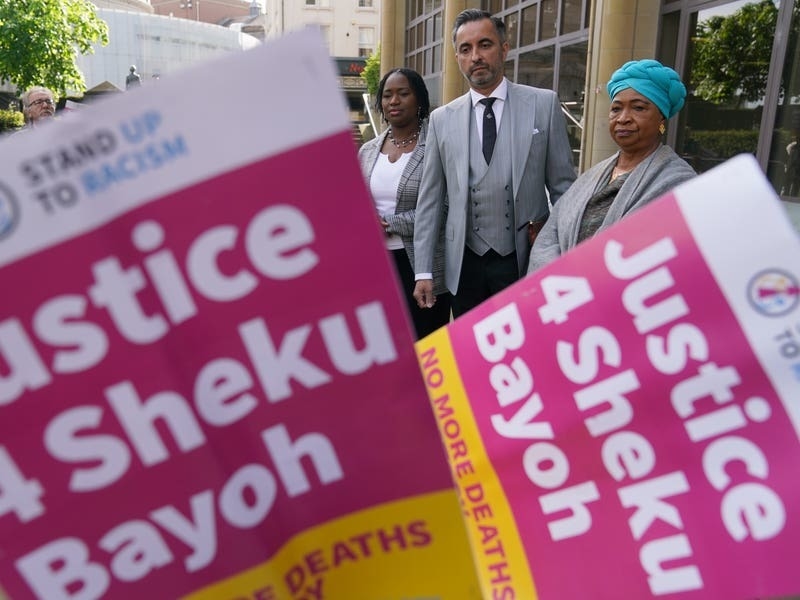 A retired police inspector said he would have encouraged officers to “give more time and space” if he was in contact with them during the moments they were in contact with Sheku Bayoh.

At a public inquiry into the 31-year-old’s death in 2015, Steven Stewart said he was on duty as an overview supervisor on the day Mr Bayoh died.

The inquiry heard he was in a different room when information about the officers arriving at the scene had been given to the control room.

He said the officers should have been given a stay safe message before arriving at the scene where Mr Bayoh was, adding: “I would want them to have in their minds before they were entering that street, ‘we need to take our time, we need to make a dynamic risk assessment, and we need to feedback.’”

Mr Bayoh died in handcuffs and sustained multiple injuries after officers responded to calls from the public about a man brandishing a knife and behaving erratically on a Sunday morning in Kirkcaldy, Fife, in May 2015.

His family believe race played a part in his death.

Mr Stewart said told the inquiry: “I didn’t realise, it was only when I’ve attended the inquiry, that I knew they (the officers) were already on the male so quickly.

The inquiry heard the feedback Mr Stewart received was two of the officers’ emergency buttons had been turned on and an officer was injured.

“That was not the feedback I was looking for,” he said.

In previous evidence, former constable Alan Paton said on arrival at the scene, he formed the immediate opinion that Mr Bayoh needed to be brought under control because he did not know whether he was armed, and that it was “too big a risk to sit back and contain”.

He said Mr Bayoh’s eyes were “bulging out his head indicating intoxication or mental illness or mental health crisis”.

Senior counsel to the inquiry, Angela Grahame KC, asked if knowing that description at the time would have made a difference to Mr Stewart’s advice to officers.

The witness replied saying he would have called an ambulance, adding: “If it’s safe to do so, give that space and time, back off, ease off, try and speak to him, understand what’s going on with him, confirm whether or not he’s got a weapon.

“You have to recognise though that someone might not engage with you if they have a positive mindset that’s affected by something.”

Ms Grahame said, from inquiry documents, it was clear there was no one from Police Scotland giving any of the officers at the scene instructions “to wait, observe, form an impression of the man or to build rapport to de-escalate and negotiate”.

“None of that was being shared over the airwaves with the officers on the ground,” she said.

Ms Grahame asked Mr Stewart who was responsible for giving that stay safe advice, to which the witness said the divisional supervisor, Sergeant Maxwell.

Previous evidence at the hearing said that in 2015, the general ethos about approach was for officers “to gain control and compliance” before trying to de-escalate a situation.

Ms Grahame asked Mr Stewart if he was aware of this said guidance at the time, to which he replied: “No, I used to do officer safety training on an annual basis and it was the de-escalation approach, as that’s what I’ve always been been taught.

“You’re looking to use the minimum level of force possible to achieve your objective safely.”

The inquiry, before Lord Bracadale at Capital House, Edinburgh, continues.