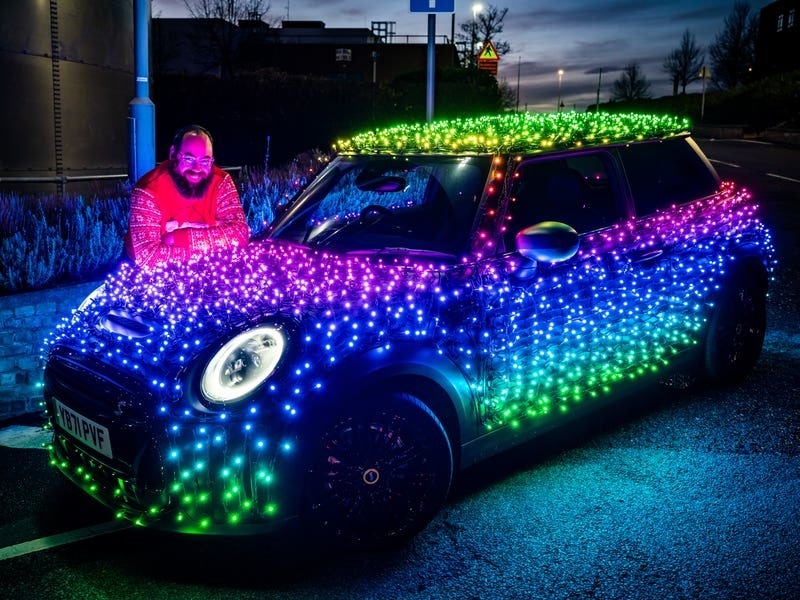 The driver of a Mini decorated in 3,000 twinkling lights hopes to “bring little moments of joy to people’s lives” this Christmas and raise over £10,000 for charity.

Nicholas Martin, 33, is celebrating his fifth year behind the wheel of his “Festive Mini” but has gone to new lengths to create an illuminative show with thousands of app-controlled, battery-powered lights – each one customisable to generate different light patterns, messages, and animations.

With each individual light available to sponsor for £2, Mr Martin will take to the streets of his local town Bracknell, in Berkshire, in the run-up to Christmas with an aim to support The Multiple Sclerosis (MS) Trust and Duchenne UK.

“The Festive Mini actually has a purpose and its purpose is to bring joy to as many people as possible,” Mr Martin, a software engineer, told the PA news agency.

“They have an expectation of what it might look like but when they actually see it, their jaw just drops.

“It brings little moments of joy to people’s lives.”

Mr Martin first started driving his decorated Mini in 2018 “as a bit of fun,” when he wrapped his red car in around 600 supermarket-bought LEDs.

It garnered attention on a local Facebook group and when people were asking for its return in 2019, Mr Martin wanted to go “bigger and brighter and a lot more festive”.

“With a muscle wasting disease, you lose the ability to walk and stuff like that – it’s a really horrible thing,” Mr Martin explained.

“So he wasn’t able to go out to all of these wonderful places to see Christmas lights because he’s wheelchair-bound.

“Somebody invited me and said, ‘Why don’t you surprise Marcus with a visit from The Festive Mini?’ So I did just that.

“When I saw his face light up, it hit me with so many emotions.”

Mini UK were in touch to provide him with an electric Mini in 2021, keeping the project “economically friendly” as Mr Martin gives the British public an opportunity to have their say in the appearance of The Festive Mini – even allowing them the chance to draw a design on the car via an iPad.

“People haven’t seen the finished product yet, (but) it’s amazing,” he said.

“You can actually draw on the Mini, which is fantastic, you can put writing on it as well.

“In terms of the effects, there (are) two stand-outs for me – there’s one which is a Christmas cracker, a green and red striped pattern which I love.

“And then the favourite, of course, is the rainbow pattern… It just shows off all the colours, it’s beautiful.”

His mother lives with MS, which he said has made hearing other people’s stories “really hit home”.

“There’s one person, in particular, that was really, really emotional,” Mr Martin said.

“It was during lockdown and this woman had unfortunately just lost her husband to MS.

“And she suddenly started crying… And she just held my arm and said, ‘I am so sorry, I’ve just lost my husband to Multiple Sclerosis and what you’re doing is absolutely fantastic, but this is the first time I’ve actually processed the fact that he has gone.’

“It is just amazing that The Festive Mini can bring out all of these emotions.”

He spent “roughly two weeks, four hours every night,” wrapping the car ready for its official switch-on at The Lexicon shopping centre in Bracknell on November 25 and plans to drive it up until Christmas eve.

Mr Martin’s wife, Rachel Martin, said it has been “amazing to see how happy it makes him”.

“I have to live with him when he’s putting all the lights on, which can be a long task.

“But it’s worth it… Seeing how everyone reacts to it and how much work is put into it, it’s really lovely.”

To find out more about The Festive Mini, go to: www.festivemini.com