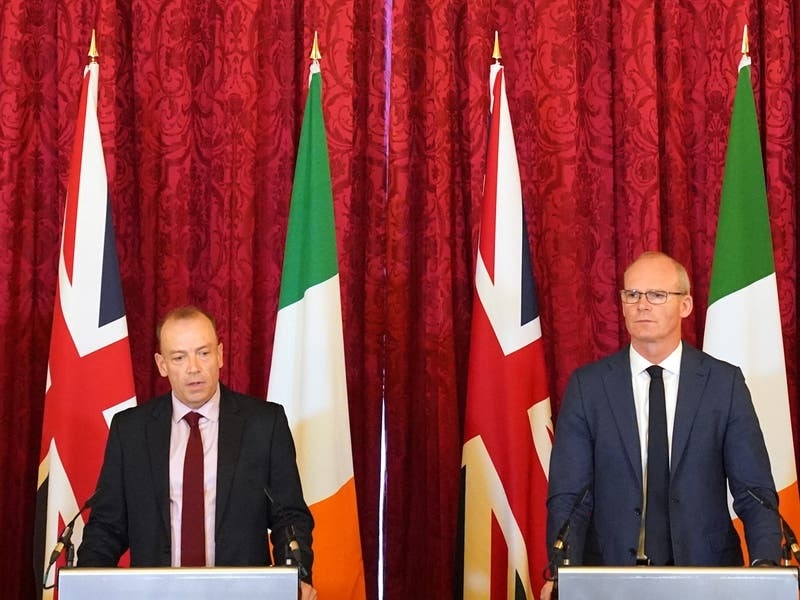 Politicians may need to “surprise people” to resolve the dispute over the Northern Ireland Protocol, Ireland’s Foreign Affairs minister has said, amid fresh hopes that a compromise can be reached.

Simon Coveney also said on Friday that renewed technical discussions between the UK and the EU this week had gone “reasonably well”.

Recent days have been dominated by renewed hopes in Brussels and Dublin that the UK could be in a mood to reach a deal, after months of wrangling over the post-Brexit settlement for the region.

As well as the exchange of warm words, the attendance of Prime Minister Liz Truss at a European summit in Prague on Thursday also prompted speculation that a thaw in relations between the EU and the UK could be possible.

Foreign Secretary James Cleverly met Mr Coveney in London on Thursday, with the pair expressing warm words and a desire for close co-operation.

Mr Coveney said: “Political leadership is about making things happen and sometimes surprising people, and I think that’s what we need to do over the next few weeks, to provide reassurance.

“Our focus is on timelines here. Can we find a way of making a big step forward before the end of October that can be a basis for reassuring particularly the unionist community that makes sense for them to be part of an executive and functioning assembly?

“I don’t think we can get everything agreed in the space of three weeks, that is completely unrealistic. But the question is can we make progress that is measurable and serious in that period where people can see we’re on a course that the people can start believing in?”

The Secretary of State, flanked by Northern Ireland minister Steve Baker, also repeated his intention to call an election if the DUP does not return to the executive table by the legal deadline of October 28.

Current legislation says that if Stormont is not restored by then, then Mr Heaton-Harris should call a new election.

A joint communique, issued after the meeting, committed both sides to “doing everything possible” to restore powersharing.

Talks between the UK and Ireland are expected to intensify over coming weeks to avoid another “unnecessary” poll, Mr Coveney told reporters.

He also said he was “very positive” that a solution can be found over the protocol, which was agreed by the UK and the EU as part of the Withdrawal Agreement and sought to avoid a hard border with Ireland after Brexit.

The arrangements have created trade barriers on goods being shipped from Great Britain to Northern Ireland and are vehemently opposed by many unionists in Northern Ireland.

“And we need to show some progress on that.”

Relations between the EU and the UK had been soured by the Government’s Northern Ireland Protocol Bill, which was introduced into the Commons by then-foreign secretary Ms Truss.

The proposed legislation, which has cleared the House of Commons and will be debated at second reading by the House of Lords next week, would rip up large swathes of the agreement, and critics have accused the UK of acting in breach of international law.

Mr Heaton-Harris defended the UK’s right to push ahead with the Bill, but said it would be a “redundant piece of legislation” if a deal was reached.

The Irish Government has been among the strongest critics of the Bill, but Mr Coveney appeared upbeat on Friday about the opportunity for a deal presented by the new-look Truss administration.

“I think the conversations we’re having now with the British Government certainly suggest to me that we are in a different space now, one we haven’t been in for quite some time,” he said.

“What we’re after here is a nil-all draw, where everybody can walk away feeling that they haven’t won or lost, but they can live with the outcome.”

Mr Heaton-Harris later tweeted: “Through the Belfast (Good Friday) Agreement and our governments’ close relationship, we share a strong commitment to seeing the devolved institutions in NI restored. This was clear in our discussions today.

“There are both challenges and opportunities ahead, but the UK and Ireland’s close relationship is strong.”