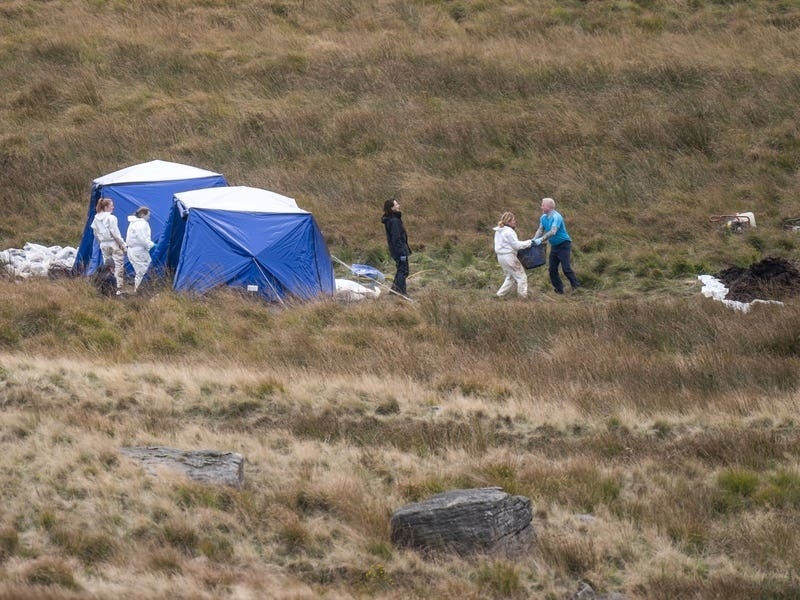 Police have ended a search for Moors Murders victim Keith Bennett on Saddleworth Moor – with no evidence to indicate human remains.

The search concluded there was no evidence to indicate the presence of human remains, the force said.

Archaeologists began searching the area last week after author Russell Edwards said he believed he had located the makeshift grave of 12-year-old Keith, who was murdered by Ian Brady and Myra Hindley in 1964.

Mr Edwards is said to have commenced his own dig – close to where the other Moors Murders victims were found – and uncovered a skull with teeth, which independent experts are reported to have concluded is human.

Detective Chief Inspector Cheryl Hughes said: “In response to the report made on Thursday September 29, officers met with the member of the public who later provided us with samples and copies of the photographs he had taken.

“He also took officers to the location from which he had obtained these and provided grid references.

“An accredited forensic geologist also took a number of soil samples – analysis of which is ongoing.

“The items given to us by the member of the public have been examined by a forensic scientist and though this hasn’t yet indicated the presence of human remains – more analysis is required.

“With regards to the photograph, we have sought the assistance of a forensic botanist.

“We are now utilising the knowledge and skills of a forensic image expert to put a standard anthropological measurement to the object to assist with identification.

“At this stage, the indications are that it would be considerably smaller than a juvenile jaw and it cannot be ruled out that it is plant-based.

“The excavation and examination at the site is complete and, to reiterate, we have found no evidence that this is the burial location of Keith Bennett.”

Assistant Chief Constable Sarah Jackson said Keith’s family was “central” to any action taken in the case and the force “remained committed” to finding answers for them.

She said: “We have always said that we would respond, in a timely and appropriate manner, to any credible information which may lead us towards finding Keith.

“Our actions in the last week or so are a highly visible example of what that response looks like, with the force utilising the knowledge and skills of accredited experts, specialist officers and staff.

Keith was last seen by his mother in the early evening of June 16 1964 after leaving home in Eston Street, Longsight, Manchester, on his way to his grandmother’s house nearby.

Brady and Hindley were caught after Edward’s murder and Lesley and John’s bodies were recovered from the moor.

They were taken to Saddleworth Moor to help police find the remains of the other victims but only Pauline’s body was recovered.

Brady claimed he could not remember where he had buried Keith.

In 2009, police said a covert search operation on the moor, which used a wealth of scientific experts, also failed to discover any trace of the boy.

In 2012 – 48 years after Keith’s death – his mother Winnie Johnson died aged 78 without fulfilling her wish of giving him a Christian burial.

Detective Chief Inspector Cheryl Hughes said: “They are clearly distressed as like everybody else they got their hopes up.

“And so they found it incredibly difficult, to have this all brought to them, to have their hopes up and then to receive the findings, but they are aware of the current state of the investigation.”

Police said experts advised them they would have expected to find some visible human remains, such as bones, if the child had been left there.

Assistant Chief Constable Sarah Jackson said they did not regard the latest search as a “waste of time”.

Ms Jackson said: “We can’t say it’s been a waste of time. Clearly, we all have a shared interest here to find Keith.

“So, when we get information that is credible, that has some scientific evidence towards it, then it would be absolutely essential we follow all those lines of inquiry, because this could have taken us to find Keith.

“So, I don’t see it as a waste of time, I think it was our absolute duty to investigate those lines of inquiry so that we can confidently say, actually, we don’t think Keith is there.”