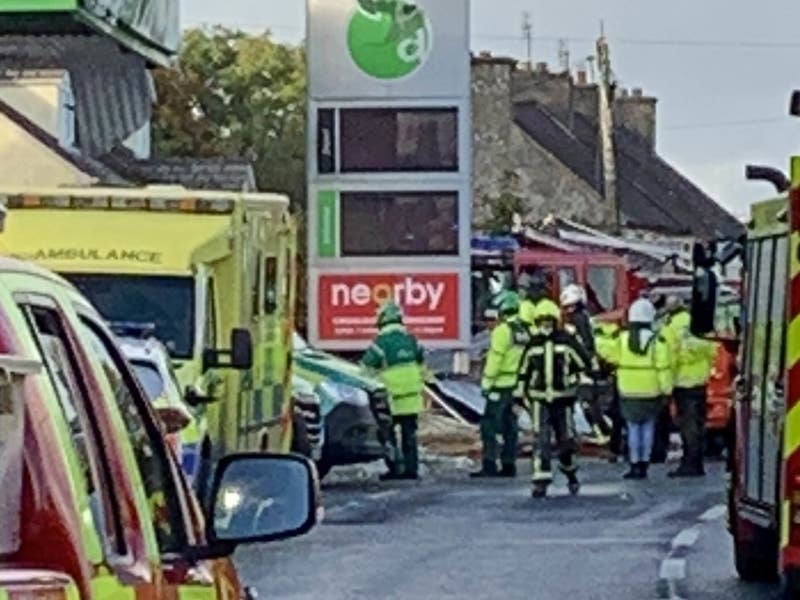 Multiple injuries have been reported with people feared trapped in debris hours after a “devastating” explosion at a service station in Ireland.

The Applegreen service station located in the village of Creeslough, Co Donegal, sustained extensive damage in the blast.

The buildings surrounding what is the village’s main shop were also badly damaged.

Fears were mounting in Creeslough on Friday night that lives have been lost in the explosion.

Sniffer dogs were being used amid the rubble at the explosion site late on Friday night as emergency services continued their search efforts.

A crowd of around 30 local people gathered behind a Garda cordon and watched on in hushed silence.

Irish premier Micheal Martin said his thoughts and prayers were with the entire community of Creeslough.

“Thinking too of all the emergency services, from across the north-west and NI working in very traumatic situation,” he tweeted.

“What I’m appealing for is for the prayers of the people across this county and across the country, to pray for us, to help us and to give us strength to get through these difficult hours and difficult days that may lay ahead.”

“We’re just waiting here, my sympathies and thoughts are with a lot of families here and their friends and loved ones, there is a very difficult waiting period now,” he told PA.

“People have pulled together and emergency services are there and doing their work, working carefully through this very, very difficult time.

“People are stunned, it’s very surreal, very difficult to put it into words. Just thinking of this very closely knit community that are still clinging on to hope, but they know that it’s going to be a difficult time ahead.”

Fellow TD Pearse Doherty said that people were still trapped in the building on Friday evening as the emergency services worked to remove the rubble from the area.

Ireland’s Agriculture Minister Charlie McConalogue said he was thinking of all those affected by the “awful” incident.

The Donegal TD said: “My deepest thoughts and prayers are with everyone affected by the awful incident in Creeslough this afternoon.

“Thinking of the emergency services personnel involved this evening too.”

Multiple emergency service vehicles remained at the scene on Friday night while a Coastguard helicopter airlifted some of those who were injured in the blast from Letterkenny University Hospital to Dublin.

The Letterkenny hospital appealed to the public not to attend its emergency department unless it was urgent.

Applegreen said in a statement that it is “aware of a serious incident at its dealer-operated location at Creeslough”.

“The thoughts and prayers of everyone here at Applegreen are with all of those who have been affected.”

“Our thoughts are with all those affected by the tragic events and with the emergency services responding.”

“There are emergency services everywhere, there were so many gardai and fire engines.

“What looked like local farmers’ tractors were helping to dig out the rubble.”

Ambulances and fire crews from across the border in Northern Ireland have deployed to the area to assist with the emergency response.

A local hotel stopped taking bookings from members of the public to ensure all spare rooms were held for first responders.

Mr Doherty said it was after 3pm when the “devastating” and “massive” explosion took place that could be heard from miles around.

“This is something that’s your worst nightmare. This is a quiet village, a very close-knit village, this is the only shop in the town,” he told RTE news.

“It ripped right through this building, and this was a very busy location at that point in time.

“Three o’clock, it’s just after school, people were going to collect their pensions. This is a very, very, very busy locality here at this shop, this petrol station, this deli, the post office at this time.”

Mr Doherty said it had left “a very, very dark cloud” over the community.

He said: “There are silent prayers being said, there are people still trapped within the building and the emergency services are doing everything that they can to remove the rubble, and people are being airlifted away to our hospitals in the region.

“My thoughts and prayers are with everyone involved,” Mr Molloy said.

“It looks horrific from what I can see from photographs. It looks terrible. It’s just terrible.

“I know the family. It’s beyond words.”

He said: “My thoughts and prayers are with everyone involved.”

Independent Donegal councillor John O’Donnell said he was praying there were no fatalities.

“What we’re hearing is there’s just absolute carnage in Creeslough at the moment, there’s a massive gas explosion,” he told BBC Radio Ulster.

“The feedback I’m getting from family and friends who are unfortunately down at the scene and in the area is just that the whole place is chaos at the minute, everybody’s very, very taken aback and devastated at what’s happening.”