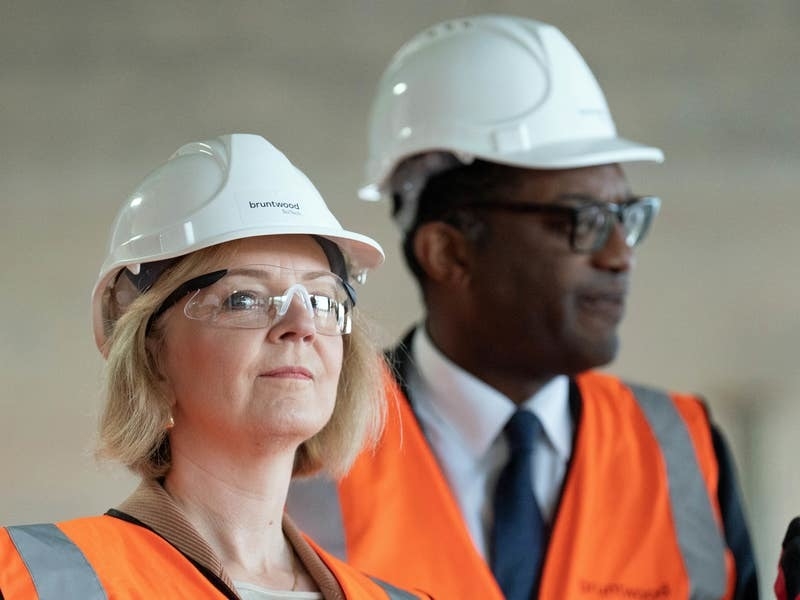 Liz Truss insisted she trusts Chancellor Kwasi Kwarteng despite the U-turn over axing the top rate of tax.

The Prime Minister and Chancellor toured a construction site in Birmingham in a public display of unity.

But she initially failed to say she trusted her Chancellor and there have been mixed messages over whether he will be allowed to accelerate the timing of his plan to bring order to the public finances.

Speaking to reporters during her visit to the health research centre building site, Ms Truss was repeatedly pressed on whether she could trust her Downing Street neighbour after his humiliating climbdown over the plan to axe the 45p rate of income tax for top earners.

She declined to use the “trust” word, but said: “I work very, very closely with my Chancellor.

“We are facing difficult economic times, we are seeing rising interest rates around the world, very serious issues with energy prices and inflation, and we have acted decisively.”

But having failed to say she trusts the Chancellor during the visit, Ms Truss later did give that message during a round of broadcast interviews.

“I do trust the Chancellor, absolutely,” she told TalkTV.

The plan, and the Office for Budget Responsibility forecasts due to be published along side it, are keenly awaited by financial markets which have been spooked by the scale of government borrowing.

Mr Kwarteng used his conference speech to say the medium-term fiscal plan would be published “shortly”, seen as a sign that it could be moved forward to October, rather than the end of November.

Allies of the Chancellor said the OBR can move quicker and “so can we”.

But while Treasury insiders were considering moving the statement forward, publicly Ms Truss and Mr Kwarteng insisted the November 23 date remained in place.

“This is when we’re going to set out the OBR forecasts but also our medium-term fiscal plan.

“And what we’ve done is we’ve had to take very urgent action to deal with the immediate issues we face, the energy price, the inflation and a slowing global economy.”

Mr Kwarteng told the broadcaster “’shortly’ is the 23rd (of November)” and suggested people had been “reading the runes” incorrectly.

During the joint visit to a site where a medical innovation centre is being constructed in Selly Oak, the Prime Minister operated a remote lifting device used to position panes of glass.

She joked “how much does this glass cost if I break it” as she used the machine to safely move the pane.

After a threatened revolt over the 45p rate and a looming battle over benefits, the Prime Minister will have to handle her relationship with her MPs with equal care.