Baton relay covering 4,800 miles from Glasgow to Egypt gets under way 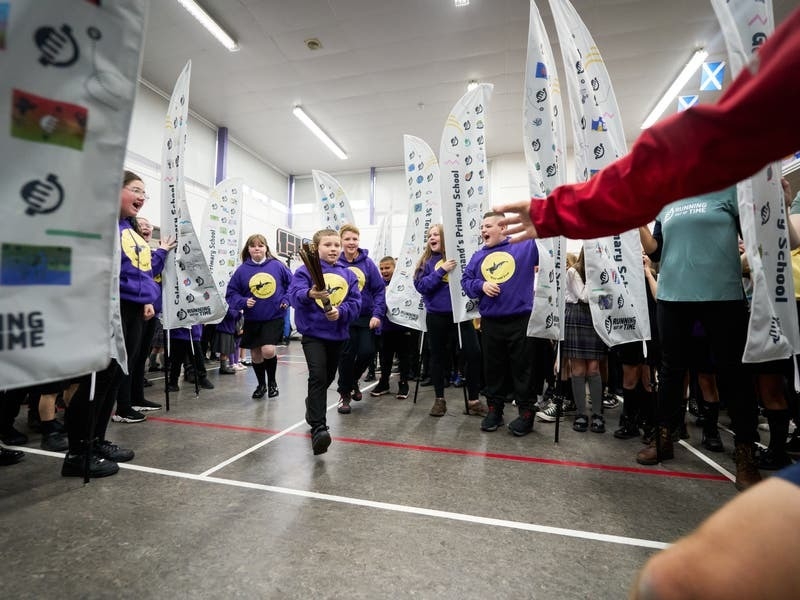 Glasgow was the starting point for the longest, non-stop, baton relay ever attempted as the city passes hosting duties to Egypt for Cop27, having hosted Cop 26 last year.

The weather affected plans to hold the event at Glasgow Green after heavy rain and wind battered the city on Friday.

Children at Sunnyside Primary School in Craigend, Glasgow, were on hand to ensure the baton left smoothly on Friday as three pupils read out a message that was then placed inside the baton.

Thousands of runners, cyclists and sailors will work together to pass the baton hand-to-hand from Glasgow across more than 4,800 miles (7,800km) to Sharm el-Sheikh as part of Running Out of Time relay.

The baton, which has been designed by Glasgow-based company 4c Design, will pass through 18 countries via land and sea, including Scotland, Wales, England, France, Belgium, the Netherlands, Germany, Austria, Italy, Slovenia, Croatia, Bosnia and Herzegovina, Montenegro, Albania, Greece, Cyprus and Israel, before arriving in Egypt.

During its route through Scotland, the baton will visit special projects such as the Glasgow Food Policy Partnership and the Tarras Valley Nature Reserve in Langholm, Dumfries and Galloway.

Running Out of Time co-founder Jamie Hay said: “It’s taken a huge collaborative effort to get this ambitious project to the start line.

“Running Out of Time symbolises the very essence of climate action – it’s an extraordinary, bold, ambitious plan that will only succeed because everyone has worked together. I know we can do it.”

Leader of Glasgow City Council, councillor Susan Aitken, said: “Cop26 shone a light on just how dire the situation facing our planet is and that collective and accelerated action is the only option to save humanity from a global catastrophe.

“While nation states make pledges, it is cities, like Glasgow, that are delivering on a low carbon and climate resilient future and must remain central to future policy decisions and action.

“The message contained within the relay baton will, I’m sure, continue to convey that strength of feeling that we saw here in Glasgow last year.

“Participating in the Running Out of Time relay to Cop27 is another opportunity for Glaswegians to have their voices heard and to show their continued commitment to fighting climate change.”

“Running Out of Time symbolises the very essence of climate action – it’s an extraordinary, bold, ambitious plan that will only succeed because everyone has worked together. I know we can do it.”