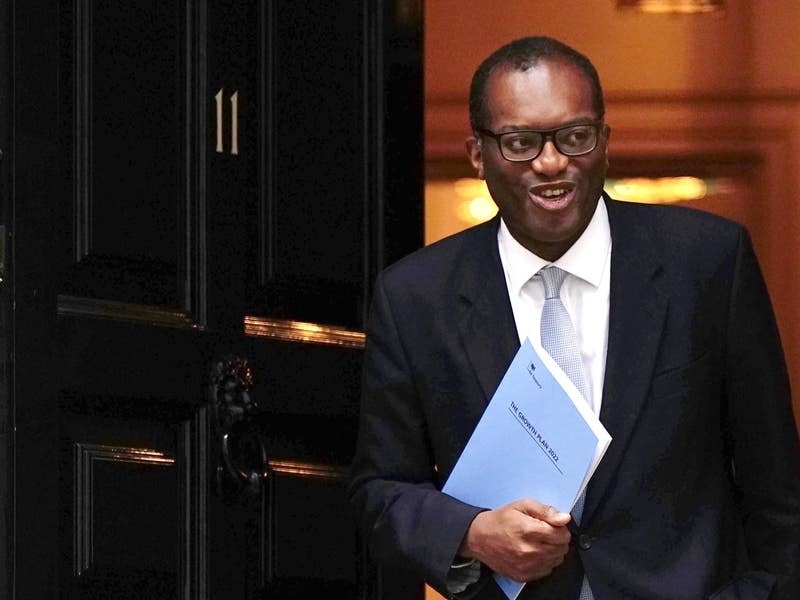 Chancellor Kwasi Kwarteng abolished the top rate of income tax for the highest earners as he spent tens of billions of pounds in a “gamble” to drive up growth during a cost-of-living crisis.

Using more than £70 billion of increased borrowing, Mr Kwarteng also brought forward a planned cut to the basic rate of income tax to 19p in the pound a year early to April and reduced stamp duty for homebuyers.

He argued tax cuts are “central to solving the riddle of growth” as he confirmed plans to axe the cap on bankers’ bonuses while adding restrictions to the welfare system.

Treasury estimates put the measures, including Liz Truss’s promises to reverse the national insurance rise and axe the hike to corporation tax, as costing nearly £45 billion a year by 2026.

He argued his economic vision will “turn the vicious cycle of stagnation into a virtuous cycle of growth”.

However, shadow chancellor Rachel Reeves said the strategy amounts to an “admission of 12 years of economic failure” under successive Conservative governments.

The Labour MP likened the Prime Minister and Mr Kwarteng to “two desperate gamblers in a casino chasing a losing run”.

The pound dived to another fresh 37-year low as traders swallowed the cost of the Chancellor’s latest package and potential impact on Government borrowing.

– The introduce of VAT-free shopping for overseas visitors;

– Confirmation of plans to make around 120,000 more people on Universal Credit take active steps to seek more and better-paid work or face having their benefits reduced.

The package was announced a day after the Bank of England warned the UK may already be in a recession and lifted interest rates to 2.25% – the highest level for 14 years.

“This will, I am sure, lead to the Bank of England increasing interest rates more than they otherwise would do,” he told BBC News.

“This is a big gamble. There is a chance it will pay off.

“It worries me more, in a sense, that the Government is putting tens of billions into the economy now at a point when inflation is very high, where it might be slowing down in terms of growth but prices are rising very high.”

“I’m going to abolish it altogether,” he said, announcing the policy, which will cost around £2 billion a year from 2025.

Cutting the top rate of income tax will save the top earners, on average, £10,000 a year, according to Treasury estimates.

But Torsten Bell, the chief executive of the Resolution Foundation think tank, said those earning £1 million annually will get a £55,000 tax cut next year from the wider package.

On bankers’ bonuses, Mr Kwarteng argued the cap to limit them to twice salaries “never capped total remuneration”, adding: “So we’re going to get rid of it”.

The Treasury said the total package would be funded by increasing borrowing by £72.4 billion.

The net cost of reversing Boris Johnson and Rishi Sunak’s 1.25 percentage point increase to national insurance imposed in April was put at around £15 billion per year.

Axing their planned corporation tax rise by maintaining it at 19% was set to come in at £18.7 billion a year by 2026.

The Chancellor avoided the immediate scrutiny and forecasts of the Office for Budget Responsibility by describing the package as a “fiscal event” rather than a full budget.

Ms Reeves said: “Never has a Government spent so much and explained so little.”