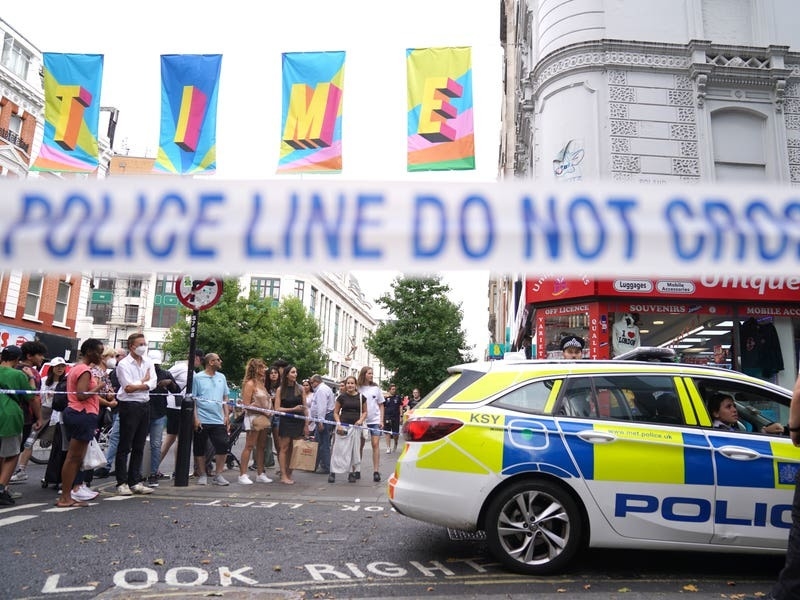 A man has been stabbed to death in a side road near Oxford Street in London.

Witnesses said violence broke out near a Korean restaurant in Poland Street on Monday morning.

One man who was in a building on the side road told the PA news agency: “There was shouting in the street and it escalated into a full-blown row.

“There was a weapon and someone fell to the ground.”

London Ambulance Service and the air ambulance attended but the victim was pronounced dead at the scene 40 minutes later.

A man has been arrested.

The Metropolitan Police statement said: “At 11:40am on Monday August 15 police were called to reports of a stabbing in Poland Street, W1.

“His identity has yet to be confirmed.

“A man has been arrested in connection with the incident.”

Poland Street is a turning off Oxford Street, which is one of the busiest shopping areas in Europe and attracts tens of thousands of visitors per day, and runs into Soho, another busy area known for its nightlife.

Police officers were seen in Arirang, a Korean restaurant on Poland Street, and also went into Flannels, a clothes shop on Oxford Street.

A London Ambulance Service spokesman said: “We were called at 11.36am today to reports of a stabbing in Poland Street, central London.

“Despite the best efforts of our teams, the patient sadly died at the scene.”

So far this year there have been 57 homicides in London including Monday’s stabbing.

A spokesperson for Mayor of London Sadiq Khan said: “The mayor’s thoughts are with the friends and family of the victim following this appalling attack in our city today.

“A man has been arrested and the mayor remains in close contact with the Met Police about the incident.

“Each death through violence in London is a tragedy, which is why the mayor’s top priority will always be tackling crime as well as the complex causes of crime.”