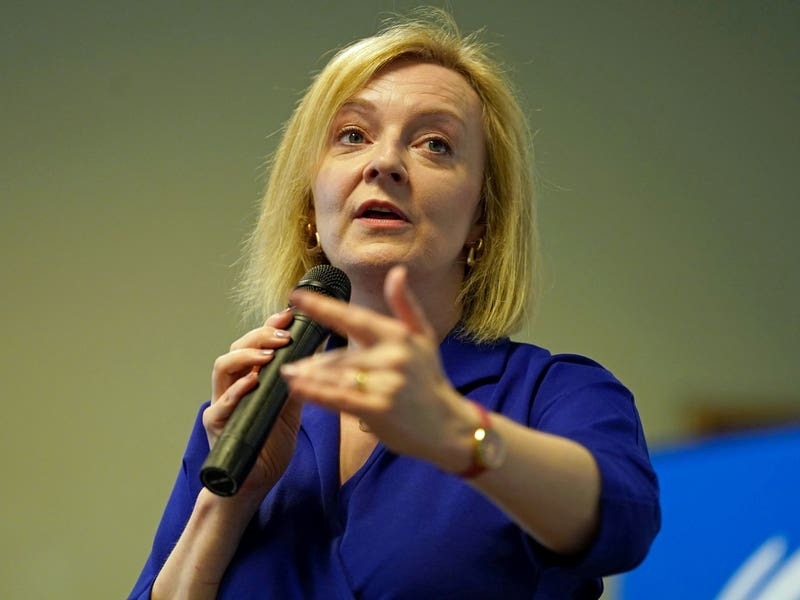 The announcement came after the campaign of Ms Truss, the Foreign Secretary, was boosted by two surveys giving her overwhelming leads over Mr Sunak as they face off to become the next prime minister.

She won a 34-percentage point lead over Mr Sunak in a YouGov poll of party members, before a survey for the ConservativeHome website released on Wednesday put her 32 ahead.

In an article for The Times, Mr Javid said the nation risks “sleepwalking into a big-state, high-tax, low-growth, social democratic model which risks us becoming a middle-income economy by the 2030s”.

“If we can renew our government with a bold agenda, the Conservatives can still beat Labour, the Lib Dems and the SNP at the next election – and the evidence suggests Liz is the best-placed candidate to do so,” he added.

Mr Javid launched a leadership run on a platform of swift tax cuts, but quickly pulled out, struggling to win enough nominations from Tory MPs to go through to the first round of voting.

The YouGov survey showed 60% of party members polled between July 29 and August 2 saying they intended to vote for the Foreign Secretary, with 26% backing Mr Sunak.

The poll of 1,043 Conservative Party members indicated just 11% do not know who they will vote for, while 2% said they will not take part in the contest.

A further indication of Ms Truss’s dominance came with a survey of 1,003 members by the ConservativeHome website, which had 58% backing her, to Mr Sunak’s 26%.

But she insisted she is taking nothing for granted as a delay in ballot papers being issued due to cyber security concerns gave her rival more time to catch up.

Asked if she is looking forward to being prime minister, Ms Truss said: “I am not taking anything for granted. There is still a long way to go in this leadership election.”

But she later lashed out at “the media” for having “misinterpreted” her £8.8 billion policy pledge to cut the public sector wage bill by paying workers in cheaper areas of the country less than in more expensive parts.

In the first turbulence for her campaign, Ms Truss was forced to abandon the proposal after furious Tory colleagues warned it would lead to a “levelling down” of the nation.

Under questioning during a leadership hustings of Tory members in Cardiff, Ms Truss insisted the plan was never intended to apply to doctors, nurses and teachers.

Asked who had got the policy wrong, she said: “The media.”

The information put out by her campaign said the potential £8.8 billion saving from the policy depended on it being “adopted for all public sector workers in the long term”.

Mr Sunak welcomed her U-turn, saying it would have meant “almost half a million workers in Wales getting a pay cut”.

Meanwhile, renewed her attacks on Scottish First Minister Nicola Sturgeon after saying she would ignore the “attention seeker”.

Ms Truss lamented “some unfortunate occurrences” during the Tory leadership race when questioned about some of the bitter blue-on-blue attacks as she said she would want fewer debates in the future.

“I wouldn’t necessarily have so many debates again, I think it’s better if we’re talking to each other within the Conservative Party rather than airing our dirty linen in public,” she said.

The party has made changes to its process on the advice of the National Cyber Security Centre (NCSC), part of GCHQ, after warnings that hackers could change members’ votes.

The ballots had been due to be sent out from Monday but could now arrive as late as Thursday August 11.

A Conservative spokesman said: “We have consulted with the NCSC throughout this process and have decided to enhance security around the ballot process.

An NCSC spokesman said: “Defending UK democratic and electoral processes is a priority for the NCSC and we work closely with all parliamentary political parties, local authorities and MPs to provide cyber security guidance and support.

“As you would expect from the UK’s national cyber security authority, we provided advice to the Conservative Party on security considerations for online leadership voting.”

The party has been forced to abandon plans to let members change which candidate they are backing in the election process, the Telegraph reported.