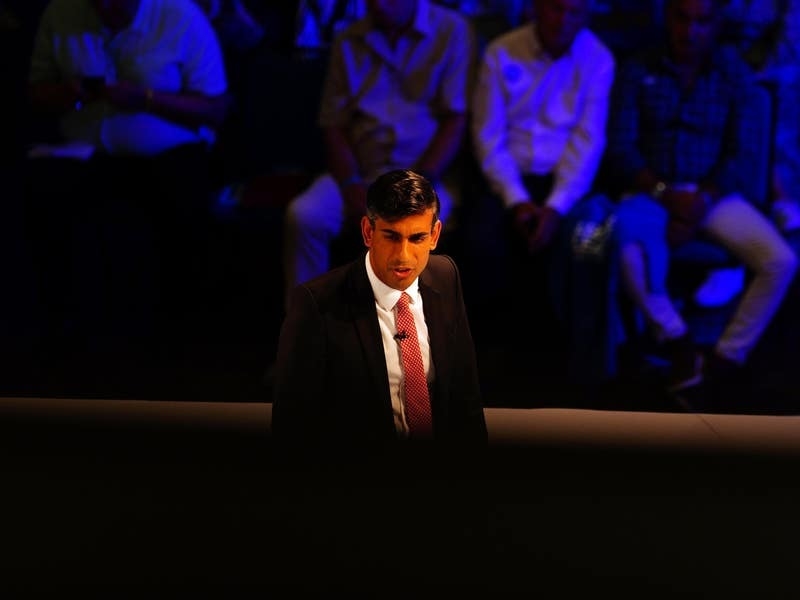 Senior minister Jacob Rees-Mogg, a supporter of Ms Truss, said Mr Sunak’s promise to cut the basic rate of income tax from 20p to 16p by 2029 is “the greatest fairytale”.

Meanwhile, Foreign Secretary Ms Truss’s plans to save £11 billion a year largely by cutting the wages of public sector workers were condemned by unions, paving the way for a potentially fraught relationship with Whitehall if she becomes prime minister.

As well as hustings on Wednesday and Friday, the two contenders to replace Boris Johnson in No 10 will also face off in a Sky TV debate on Thursday.

The Sunak campaign had hoped that his pledge to cut income tax would boost his chances as Tory Party members receive their postal votes.

“Making suggestions that tax will be cut in the years to come is the greatest fairytale.”

He also highlighted Mr Sunak’s key role in the Johnson administration which put up taxes to the highest level for 70 years to help cover the cost of dealing with the Covid-19 pandemic.

“To then come up with it now is surprising, let’s just leave it at that.”

Former Cabinet minister Liam Fox, an ally of Mr Sunak, defended the former chancellor’s approach to the public finances and dismissed suggestions that his campaign is struggling.

He told GB News: “You don’t borrow for tax cuts, you don’t max out on the country’s credit card today and leave it to the next generation, you make sure you’ve got the public finances sorted and then you give tax cuts which – as Mrs Thatcher said – have to be earned, not given.”

But Dr Fox said: “The campaign is not tanking. If you look at the poll of actual Conservative councillors at the weekend there was a two-point gap, with 31% undecided.

“I think it’s the case that Tory Party members are a lot more circumspect than a lot of the London media expected them to be.”

Ms Truss’s latest major policy announcement is a plan to tackle “Whitehall waste”, although the bulk of the savings would come from an end to national pay deals across the public sector,  potentially meaning civil servants, teachers and nurses in cheaper areas are paid less than in more costly parts of the country.

Dave Penman, general secretary of the FDA union, which represents senior civil servants, said: “As the Government faces the huge challenges posed by a new war on mainland Europe and recovering from Covid backlogs, what we need from a prime minister is solutions for the 21st century, not recycled failed policies and tired rhetoric from the 1980s.”

Mike Clancy, general secretary of the Prospect union, said: “Liz Truss has spent the last few weeks trashing the record of her own Government. Judging by this vacuous attempt to garner headlines friendly to her selectorate, she plans more of the same economically illiterate and insulting ideological nonsense that this Government has been churning out in recent years.”

The Truss campaign was boosted by the endorsement of Penny Mordaunt, her former leadership rival.

The trade minister joined forces with Ms Truss little more than a fortnight after allies of the Foreign Secretary denied involvement in a “black ops” campaign against the Portsmouth North MP.

Ms Truss also indicated that she would not proceed with plans to introduce a ban on buy-one-get-one-free promotions or more sin taxes on unhealthy foods.

In an interview with The Mail+, she said of taxes on products high in fat, sugar or salt: “There is definitely enough of that… Those taxes are over.”

She added: “Talking about whether or not somebody should buy a two-for-one offer, no.”