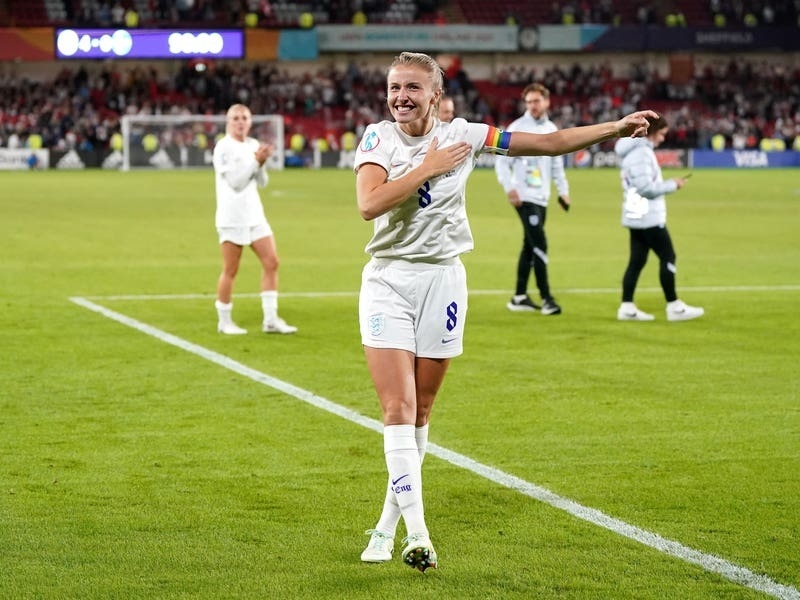 The Duke of Cambridge said the “entire country is so proud” of the England woman’s national football team after their 4-0 semi-final victory over Sweden booked them a place in the Euro 2022 final.

William, president of the Football Association (FA), shared words of encouragement after the Lionesses beat Sweden, the highest-ranked team in the Uefa Women’s Euro 2022 competition, on Tuesday.

Goals from Beth Mead, Lucy Bronze, Alessia Russo and Fran Kirby means they will face France or Germany at a sold-out Wembley Stadium on Sunday.

Posting from the Duke and Duchess of Cambridge’s @KensingtonRoyal Twitter account, William said: “Congratulations @Lionesses on making it to the #WEURO2022 final on Sunday.

“The entire country is so proud of everything you’re achieving. We believe in you and will be with you all the way! W.”

Gary Lineker was full of praise for England’s “wonderful” victory, calling it a “fabulous performance and win for @Lionesses”.

Wayne Rooney shared his pride, tweeting: “What a performance by @Lionesses tonight. A well deserved #WEURO2022 final coming up. Congratulations to all the players and staff.”

“A fantastic result for captain @leahcwilliamson and the @Lionesses tonight against Sweden.

“Come on England, bring it home.”

Nadine Dorries, Secretary of State for Digital, Culture, Media and Sport, tweeted: “Unbelievable. What a match. These England women are just incredible.

Fans celebrated in Trafalgar Square after the final whistle.

Sam Duce, 24, who lives in London and works in telecoms, said: “It was great to see some long overdue support for the women’s team.”

Claudia Bruce, 24, from Leicester, said the victory was “huge”, adding that “women’s football has never been more supported”.

Mark Cording, 37, from Edgware, north London, said their semi-final victory was “absolutely fantastic”, adding: “It’s a dream come true to see the girls get through to the final.”

He told the PA news agency: “Whoever gets to the final, Germany or France – probably Germany, they need to play their best.

“I wish them all the best of luck on Sunday and I’m behind them left, right and centre.”

Up to 2,000 fans gathered on the city’s Devonshire Green to watch the goal count mount on a giant screen.

Jamie Ferreday, 27, from Chesterfield, said: “I think it’s the best England win in a century to be honest.

“I think it’s genuinely coming home. We beat Sweden – the best team in the tournament. Who have we got to fear now?

“I didn’t think it would be this good. England normally make us sweat.”

Ali Parkin, 19, from Sheffield, said it was all just too much.

“I thought we’d win, but maybe by a single goal in extra time – but not this. I cannot believe it.”