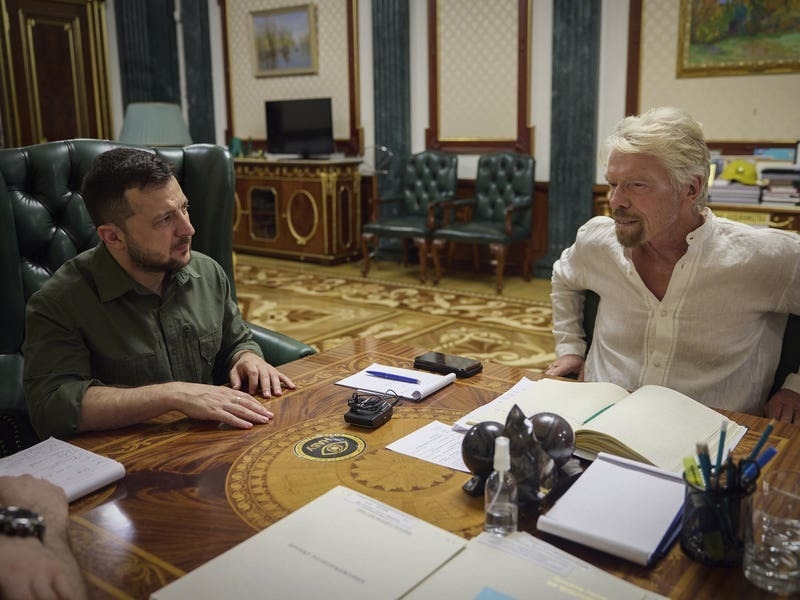 Following an invitation from the Ukrainian leader, the entrepreneur and founder of Virgin Group met with Mr Zelensky, foreign minister Dmytro Kuleba and a group of Ukrainian business leaders on Wednesday.

Sir Richard said the purpose of the meeting was to “learn what business, in partnership with civil society and governments, can do to support Ukraine most effectively”.

Sir Richard said: “It is clear these kinds of attacks are not unintended and arbitrary. They are part of a deliberate strategy to spread fear and terror among Ukraine’s civilian population.

“I hope the Russian perpetrators of these shocking acts will be held to account.”

The Virgin founder called the visit to the war-torn country a “humbling and emotional experience”.

“But the scars of war are inescapable throughout this sprawling city, most notably in the burned-out shells of residential buildings hit by indiscriminate Russian airstrikes and missile attacks.”

In a statement from Mr Zelensky’s office about Sir Richard’s visit, the president said the pair discussed the issue of maintaining the “world’s attention to the Russian invasion of Ukraine”.

“The billionaire noted that he constantly supports our state, sovereignty, territorial integrity and the introduction of the toughest sanctions against Russia and those who support and finance the war,” it said.

Britain’s Ministry of Defence (MoD) said Russian forces were making “incremental advances” in their offensive to capture Lysychansk, the last city in the Luhansk province under Ukrainian control following the retreat of Ukraine’s forces from the neighbouring city of Sievierodonetsk.

Crews also continued to search through the rubble of a shopping mall in Kremenchuk in central Ukraine where the country’s authorities say 20 people remained missing after a Russian airstrike killed at least 18 two days earlier.

It was not immediately clear whether that meant there were more victims. A number of survivors suffered severed limbs.

MoD said there was a “realistic possibility” that the mall strike “was intended to hit a nearby infrastructure target”.

“It is almost certain that Russia will continue to conduct strikes in an effort to interdict the resupplying of Ukrainian front-line forces.”

The Kremlin’s troops and their separatist allies control 95% of Luhansk and about half of Donetsk, the two provinces that make up the mostly Russian-speaking Donbas.