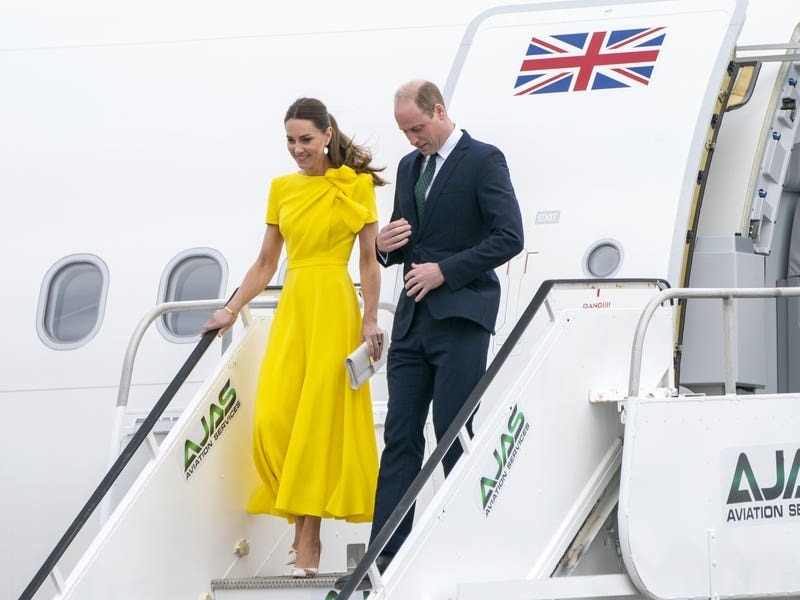 The Duke and Duchess of Cambridge’s flights for their controversial Caribbean tour cost the taxpayer more than £226,000, royal accounts have showed.

The total travel bill for the monarchy’s official duties, funded by the taxpayer through the Sovereign Grant, came to £4.5 million in 2021-2022.

The amount rose by £1.3 million – or around 41% – from the previous financial year as the royals once again began to embark on overseas tours amid the lifting of Covid restrictions.

William and Kate’s trip in March to Belize, Jamaica and the Bahamas, during which the couple were heavily criticised for images that smacked of “colonialism”, saw the pair travel by charter jet, and their staff by scheduled flights for a planning trip, at a cost of £226,383.

It was the most expensive official royal tour of 2021-22.

But royal aides revealed that future king Charles had personally spearheaded a switch to the use of sustainable aviation fuel on royal flights in a bid to combat the environmental impact of The Firm’s globe-trotting.

The ministerial RAF Voyager jet – used by the royal family and the Government – is now run on sustainable aviation fuel.

Sir Clive Alderton, the prince’s principal private secretary, said: “The prince has personally driven the move to the use of sustainable aviation fuel, which is now used for all official travel wherever possible.”

The source said Charles was working to reconcile the conflict between his responsibilities travelling around world on royal duties and his role as an environmental champion.

The prince is “pretty allergic” to travelling by helicopter and will always “raise an eyebrow” and object when the mode of transport is suggested, the source said.

“There is this rigorous process that you only get to top-end travel options if every other option fails,” the source said.

They added: “If the recommendation goes to the Prince of Wales, he will raise an eyebrow and say ‘go through this again’.

“And it won’t take very long for us to check what the reason was that he had to be in one place at one time, there at another time, and therefore it was the only option.

“The Prince of Wales is pretty allergic to using helicopters.”

The prince and the Duchess of Cornwall also flew by helicopter in July on their annual visit to Wales, with the bill coming to £15,920.

Charles also took a helicopter trip for the 70-mile journey from London to RAF Brize Norton in November ahead of his official visit to Jordan and Egypt.

The total travel costs for the trip – which saw Charles and Camilla journey to Amman, Cairo and Alexandria – came to in excess of £123,500 including charter plane, the helicopter and scheduled flights for staff.

Charles’s disgraced brother the Duke of York was known for his excessive use of helicopters at great cost to the taxpayer.

The Queen’s trip to Scotland on the royal train for Royal Week in June 2021 cost more than £46,400, while William and Kate’s charter flight and helicopter journey for a visit to Scotland in May 2021 amounted to nearly £45,200.