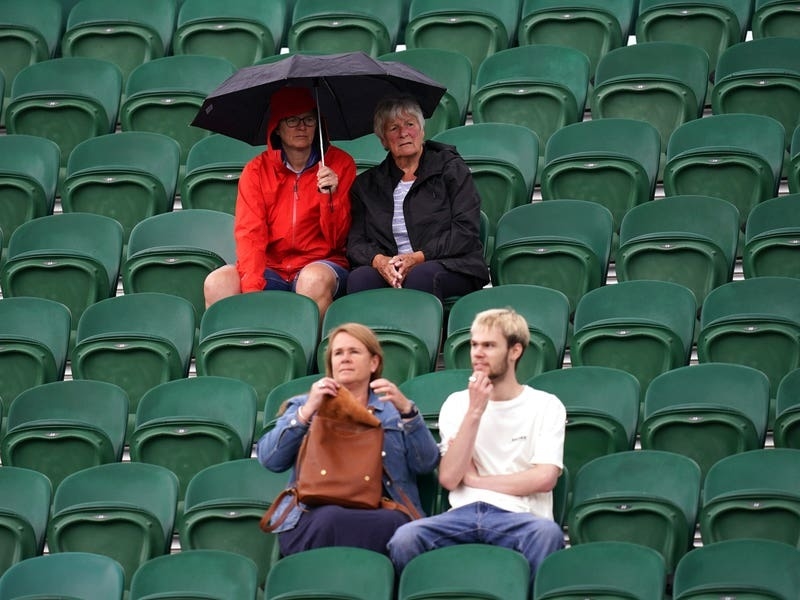 Attendance on the first day of Wimbledon was markedly low despite people queueing at the gate overnight and organisers saying they expected a “record crowd”.

Just over 36,600 people poured in to the All England Club in SW19 to watch sports stars including Andy Murray, Novak Djokovic and Emma Raducanu as the tournament returned at full capacity for the first time in three years.

Organisers had expected 42,000 spectators daily – the maximum capacity – but many seats were left empty on Monday, even in Centre Court.

It came as thousands of people queued overnight for on-the-day premium tickets.

Several fans who had been camping outside said they felt attendance was lower, even in the queue, because of the absence of fan favourite Roger Federer this year.

Fears about Covid-19, which has already taken two players out of the running, and rainy weather may also have been putting some people off.

“This is the first year that I’m feeling neutral, not seeing my favourite player that I really would pay good money to see and watch on court.”

Mr O’Donnell said he might have opted to enter through the ballot, as he has in previous years, if Federer had been playing.

The tournament has already been hit by coronavirus, taking out last year’s runner-up and one of the favourites for Wimbledon, Italy’s Matteo Berrettini, who tested positive on Tuesday.

His withdrawal follows that of Croatian former finalist Marin Cilic, who announced on Monday that he had also tested positive for Covid-19.

All England Lawn Tennis Club (AELTC) officials suggested that empty seats seen later in the day were due to people leaving early.

A spokesperson said: “Yesterday we were delighted to welcome back two long-held Wimbledon traditions after a three-year hiatus – the Queue and the Ticket Resale Scheme.

“Day one saw a natural bedding in of operations for these ticketing opportunities, and we will be encouraging any Centre, No 1 and No 2 Court ticketholders to scan out their tickets on departure so they can be offered back through the Ticket Resale Scheme and ensure that these courts are fully populated for late play.”

On Monday, officials had said that having the prestigious grass courts competition running for the full 14 days for the first time means that thousands more spectators are expected to be involved in the action.

In previous years, players have taken a break on the middle Sunday to allow the courts to recover, but, thanks to improved technology, this is no longer necessary, the chief executive of the All England Lawn Tennis Club (AELTC) said.

Speaking ahead of the first matches, Sally Bolton told reporters: “(This is the) first year of permanent middle Sunday, so we are expecting a record crowd because of that.”

The US athlete will be hoping to reach a record-equalling 24th grand slam singles title.

Meanwhile, American Coco Gauff, 18, will be facing Romanian Elena-Gabriela Ruse, as she stands on the verge of a top-10 breakthrough, having reached her first grand slam final at the French Open earlier this month.

Men’s number two Rafael Nadal, from Spain, is vying to win his third successive grand slam title and 23rd overall despite suffering a severe foot injury after the French Open less than a month ago.

Ten British players will also be taking to the hallowed south-west London courts.

Both men’s and women’s British number ones impressive victories on day one, with Cameron Norrie securing a rain-interrupted triumph before Emma Raducanu won her Centre Court debut match.

It comes after the first day saw team GB’s Jodie Burrage revive a fainting ball boy with Percy Pig sweets, while play was paused on other courts due to rain showers.

After the washout start to Wimbledon, sunshine is scheduled for Tuesday.

The Met Office has forecast “rather breezy” weather for south-west London, with patchy sunshine and maximum temperatures of 23C (73.4F).