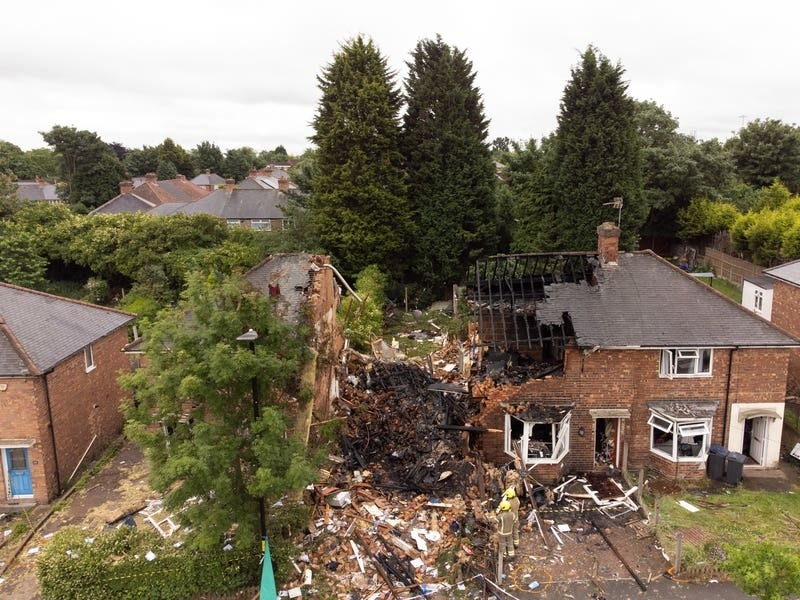 A woman has been found dead after a house collapsed following a gas explosion which saw heroic neighbours pull one casualty to safety.

A man is in a life-threatening condition after the blast at the terraced home in Dulwich Road, Kingstanding, Birmingham, at about 8.30pm on Sunday.

Residents told the PA news agency they clambered past flaming debris and through dust and rubble shortly after the blast to pull an injured man alive from the ruins.

One good Samaritan, who declined to give his name, said: “Everyone was watching, the house was on fire, nobody was going in, so we could see a way in.

“So we went in the house, me and about a dozen others.

“The dust from the loft insulation was burning around us.

“We managed to get to him and pull him out – I still have his blood on my jeans.

“He ended up coming out on a mattress, but he was saying there was a woman in the house.”

The rescuer said: “His clothes had been blown off. You couldn’t even see him, he was covered in blood.”

“We came out to the back, and then we could hear the man, geezer, screaming, and we dug him out.

“He was in the kitchen, lying flat on the floor, with his back against a fridge or washing machine.

The explosion saw debris blasted to the other side of the street, neighbouring properties damaged and a tree shredded.

Martin Ward-White, an area commander at West Midlands Fire Service, said it “was clear that a gas explosion had taken place”.

Speaking from the street on Monday, he said: “There was one male casualty who was taken to hospital immediately with life threatening injuries.

“However, what we can confirm is that sadly one female has lost her life at this incident.

“This female was identified relatively quickly within the property that exploded.

“However, due to the process of removing this individual and also the identification process, we’ve been unable to make that statement until now.

“We continue to thank the local residents for their support and understanding.”

Mr Ward-White said investigators will look into what exactly caused the gas explosion.

He also praised those who went into the burning ruins to save the man.

More than 20 people were evacuated nearby and a handful were treated at the scene for minor wounds.

The fire service said good progress was being made at the scene and a drone was being used to identify hot spots.