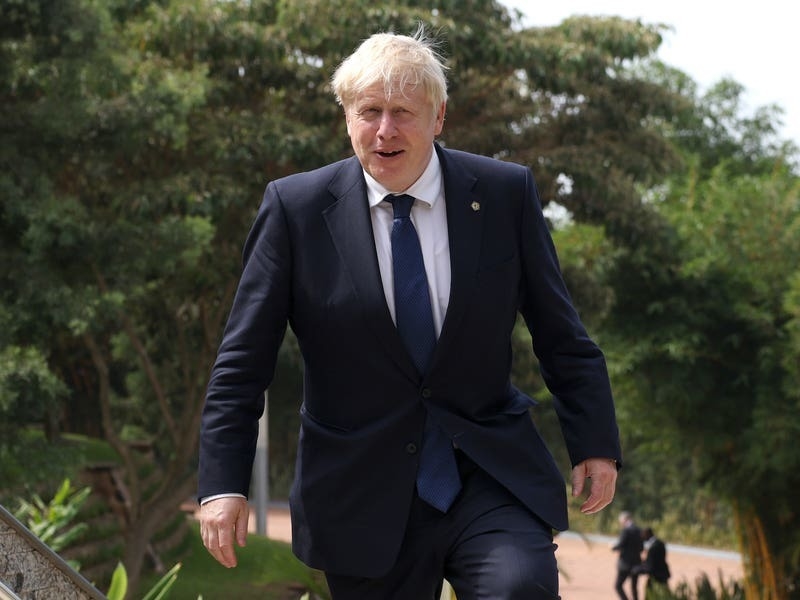 Boris Johnson has signalled that his plan to effectively tear up parts of the Northern Ireland Protocol could be law by the end of the year.

The Prime Minister, who is attending the G7 summit in Germany alongside EU leaders, said “the interesting thing is how little this conversation is being had, certainly here” – indicating he is not expecting a major diplomatic row over the Government’s plans.

MPs are set to vote later on Monday on controversial new legislation to give ministers powers to override parts of the post-Brexit deal on Northern Ireland.

Mr Johnson said the plan could be carried out “fairly rapidly”, with the proposals in law by the end of the year.

“What we are trying to do is fix something that I think is very important to our country, which is the balance of the Belfast/Good Friday Agreement,” he told reporters.

“You have got one tradition, one community, that feels that things really aren’t working in a way that they like or understand, you’ve got unnecessary barriers to trade between Great Britain and Northern Ireland.

“All we are saying is you can get rid of those whilst not in any way endangering the EU single market.”

Asked if the measures could be in place this year, he said: “Yes, I think we could do it very fast, Parliament willing.”

He said it would be “even better” if we could “get some of that flexibility we need in our conversations with Maros Sefcovic”, the European Commission vice-president.

A Number 10 spokesperson said on Monday that the Government had never put a “hard target date” on when it would hope to see the Bill enacted.

“We have never put a hard target date on it, but we want to pass it as quickly as possible to address the many issues we know the protocol is causing to people on the ground,” the spokesperson said.

Unionist opposition to the imposition of checks has seen the Democratic Unionist Party (DUP) refuse to return to the powersharing Executive, leaving the region without a functioning government.

But the move has sparked a fierce backlash from the bloc, with fresh legal action launched against Britain last week.

Mr Sefcovic indicated that further measures could follow if the UK presses ahead with the Bill.

The dispute could ultimately lead to a trade war, with tariffs or even the suspension of the entire Brexit deal between the UK and EU.

As the Bill returns to Parliament for its second reading on Monday, MPs will debate its main principles and decide whether it can proceed for further consideration.

Foreign Secretary Liz Truss will tell the Commons the legislation is a basis for a durable and sustainable solution that protects the Good Friday Agreement, avoids a hard border, safeguards the EU single market and ensures the integrity of the UK.

However, she is likely to be met with a backlash from those who oppose the move.

Ms Truss tweeted on Monday morning that the legislation will “fix the problems” that the post-Brexit arrangements in the region have caused.

“It will fix problems the protocol has created in Northern Ireland & uphold the Belfast (Good Friday) Agreement.

“Our preference remains a negotiated outcome, but EU continues to rule out change to Protocol.”

Sir Keir Starmer has said Labour would axe the proposed laws if it was in power, and confirmed his party will vote against the legislation at Westminster.

Alongside the second reading, the Government is launching a series of “structured engagements” with the business community to discuss and gather views on the Bill’s implementation.

The Foreign Office is hosting the first roundtable event on Monday, bringing together more than a dozen major UK businesses and representative groups including the Northern Ireland Chamber of Commerce, Asda, John Lewis and the Dairy Council for Northern Ireland.

Ms Truss said: “Our overriding priority is protecting the Belfast (Good Friday) Agreement, the bedrock of peace and stability in Northern Ireland – as it stands the protocol is undermining this delicate balance.

“This legislation will fix the problems the protocol has created, ensuring that goods can flow freely within the UK, while avoiding a hard border and safeguarding the EU single market.

“A negotiated solution has been and remains our preference, but the EU continues to rule out changing the protocol itself – even though it is patently causing serious problems in Northern Ireland – which therefore means we are obliged to act.”

But the DUP warned on Monday that the Bill should not be used by Tory rebels to exploit weaknesses in the Johnson administration.

Party leader Sir Jeffrey Donaldson told reporters outside Parliament: “We know there will be some opposition from some Conservative MPs who have always opposed Brexit, but I think that for the vast majority of Conservative MPs the idea of playing political football with Northern Ireland, with such a sensitive issue as this, I think they recognise is not the way to deal with the internal problems in the Conservative Party.

Sir Jeffrey also warned the House of Lords, where opposition to the Bill is expected to be strong, that blocking the legislation would be akin to “wrecking the Good Friday Agreement”.

Sinn Fein MP John Finucane branded the Government’s plans “shameful” and said they will mean “more instability” for the region.

He told BBC Radio Ulster’s Good Morning Ulster programme: “It’s very interesting that we are watching a sovereign Parliament debating whether to continue a breach of international law or not.