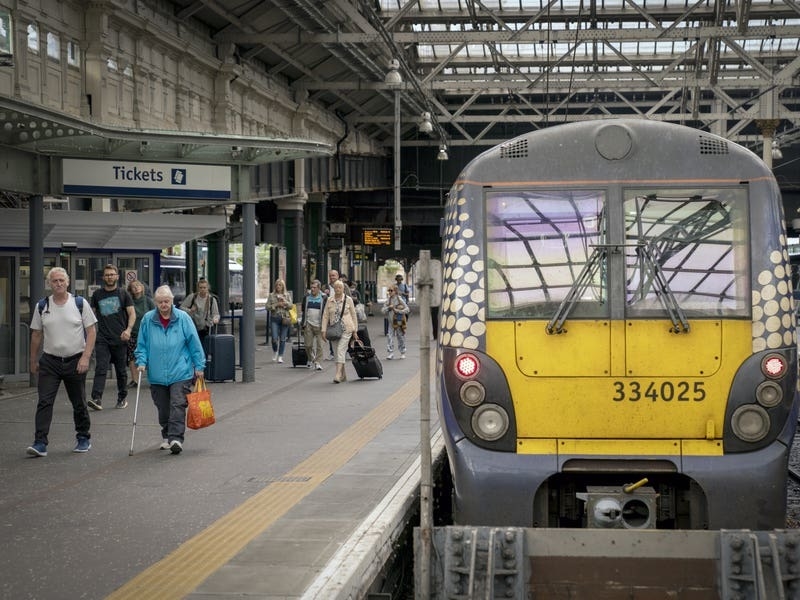 ScotRail said it was only able to run a skeleton service on five routes in Scotland on June 25 due to strike action by RMT members of Network Rail, with services ending at 6.30pm.

The RMT union has taken industrial action over a multi-year pay freeze and a lack of guarantee that there would be no compulsory redundancies across the network.

Train services across the UK have been thrown into chaos after two planned strikes took place on Tuesday and Thursday, with services running on the days in between also facing major delays and cancellations.

Train operators strongly urged passengers to “only travel by train if necessary” this weekend and to check their journey in advance.

He has called on UK Transport Secretary Grant Shapps to “tone down the rhetoric and get on with his job” in order to settle the bitter dispute over jobs, pay and conditions.

ScotRail warned passengers it would have reduced services running on five railway lines between 7.30am and 6.30pm on Saturday, and said that Glasgow Central and Edinburgh Waverley stations would close at 7pm.

The train operator said Network Rail would be unable to open other signal boxes to operate passenger services on any other routes.

Disruption is expected to last into Sunday, with music fans attending the Liam Gallagher gig at Glasgow’s Hampden Park that evening being warned the last train from nearby Mount Florida station back into the city centre is set to leave before the end of the event.

A UK Department for Transport spokesman said: “The Transport Secretary has consistently urged union representatives to get back around the negotiating table and agree a deal to bring our rail industry into the 21st century.

“Strikes should always be the last resort, not the first, so it is hugely disappointing and premature that the RMT went ahead with industrial action, which caused significant upheaval to the lives of those they claim to stand up for.”

He said that the Government earmarked £16 billion to keep the railways running throughout the pandemic while ensuring not a single worker lost their job but that the network “remains on life support”, with passenger numbers 25% down.

A Network Rail spokesman said: “We’re serious about trying to find a solution and work out a compromise that gives our people a decent pay rise, but it has to be affordable for taxpayers and fare-payers.

“Our offers have so far been rejected, with union demands far from being affordable.

“We remain available for talks, day or night, and will do everything we can to avoid further disruption for our passengers.”