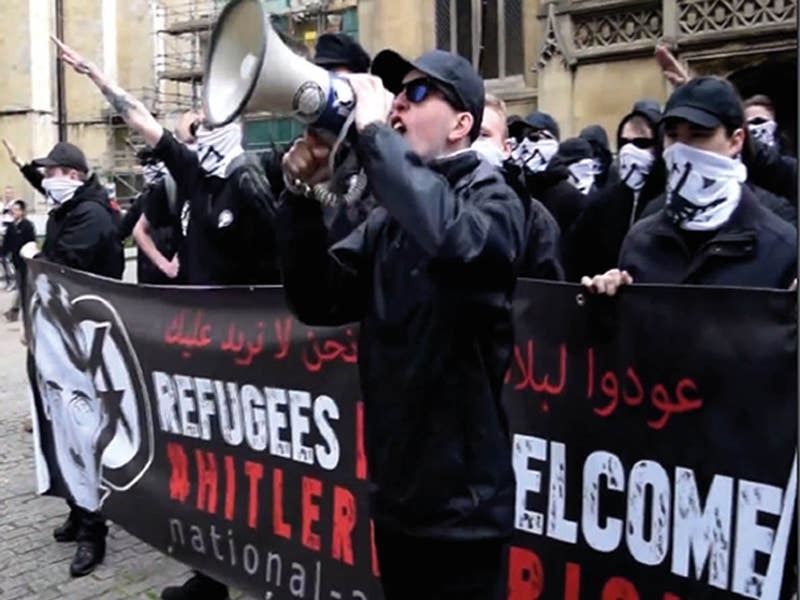 A founder of banned fascist group National Action (NA) has been jailed for more than eight years.

Last month Alex Davies, described as the “biggest Nazi of the lot”, was found guilty of being a member of the organisation after it was proscribed on December 16 2016.

The 27-year-old, from Swansea, South Wales, had set up the “continuity group” NS131 with the aim of getting around the ban, which was brought in after NA posted “congratulatory” tweets following the murder of MP Jo Cox.

On Tuesday, Davies was jailed at the Old Bailey for eight-and-a-half years by Judge Mark Dennis QC.

The judge also ordered him to spend a further year on extended licence.

Judge Dennis said: “I’m satisfied the defendant played an active and prominent role in concert with his trusted associates in trying to disguise the continued existence of the organisation in defiance of the ban.”

Addressing the defendant in the dock, he added: “You are an intelligent and educated young man but you have held, over a period of many years, warped and shocking prejudices.”

He said: “This was a well-orchestrated and determined effort to flout the ban on the activities of National Action and continue to promote and strive to achieve the long-held objectives of the organisation.”

Those objectives involved the promotion of a violently white supremacist agenda with “hatred and venom” against vast numbers of people, the judge said.

Its activities were only stopped after some nine months when police moved in to arrest members.

For some of that time, Davies had been on bail over an incident allegedly involving “racially offensive conduct” on a train – although the case was discontinued.

As part of his bail conditions, Davies was barred from contact with fellow NA co-founder Ben Raymond but they continued to associate, the court had heard.

In mitigation, Ben Newton argued that Davies’ involvement as leader of the South West splinter group of NA was more “moderate”.

Davies had been diagnosed with diabetes, anxiety and depression and his work and financial prospects had suffered as a result of press coverage, Mr Newton said.

During the trial at Winchester Crown Court, prosecutor Barnaby Jameson QC described how NA had “terrorised” towns across the country with its call for an “all-out race war”.

The group was a throwback to Hitler’s Germany and based its logo and image on the Sturmabteilung – the paramilitary wing of the Nazi party, he said.

Davies, who formed NA while at Warwick University in 2013, told an undercover reporter at the time that he did not want to say what he would do to Jews, because it was “so extreme”.

In 2016, he travelled to Germany where he posed holding an NA flag and giving the Nazi salute in the execution chamber of the Buchenwald concentration camp, causing indignation in the country where Nazi idolisation is illegal.

Following the ban, NA split into regional factions and Davies set up NS131 – which stood for National Socialist Anti-Capitalist Action – to cover the southern part of the country and which itself was later banned by the Government.

“The same ideology – a throwback to Nazi Germany.

“The same leader – this defendant, who makes it all happen. Same regional structure – adapted and redrawn following proscription, and so many familiar faces from the old guard.”

He added: “Who was at the centre of all this? The founder, the galvaniser, the recruiter, one Alex Davies of Swansea. He was probably the biggest Nazi of the lot.”

Davies was the 19th person to be convicted of membership of NA, the first right-wing organisation to be banned since the Second World War.

Fellow founder Ben Raymond, 33, of Swindon, had previously been found guilty at a separate trial of membership of a banned terrorist group.

In December last year, Raymond was jailed for eight years with a further two years on extended licence.

Together, Davies and Raymond had worked since the group’s creation in spreading an “ideology of hatred”, described as “incredibly dangerous” by counter-terrorism police.

The Government had acted after members of the organisation celebrated the actions of murderer and neo-Nazi Thomas Mair, who killed MP Jo Cox in June 2016.

Among those convicted of membership since December 2016 have been British soldier and Afghanistan veteran, Finnish-born Mikko Vehvilainen, and former Metropolitan Police probationary officer Ben Hannam.

One of the group’s associates was convicted of making a working pipe bomb, while another, Jack Renshaw, of Skelmersdale, Lancashire, later admitted plotting to kill MP Rosie Cooper with a machete.

He was jailed for life with a minimum of 20 years.

Renshaw’s plot was only foiled after a National Action member blew the whistle on his former friends, reporting the plan to counter-extremist group Hope Not Hate, which passed the information to police.

NA was social media savvy, boasting self-taught propogandists among its ranks, though its membership never exceeded 100.

They created slick computer-generated imagery – including logos, and slogans for stickers, leaflets and posters – and targeted young people in particular for recruitment.

Some of their literature called for “White Jihad”, but they had also created a policy document to “make way for National Socialism to enter British Politics”.

Other material had designs glorifying the antisemitic messaging of Hitler’s Germany or praising the work of SS death squads.