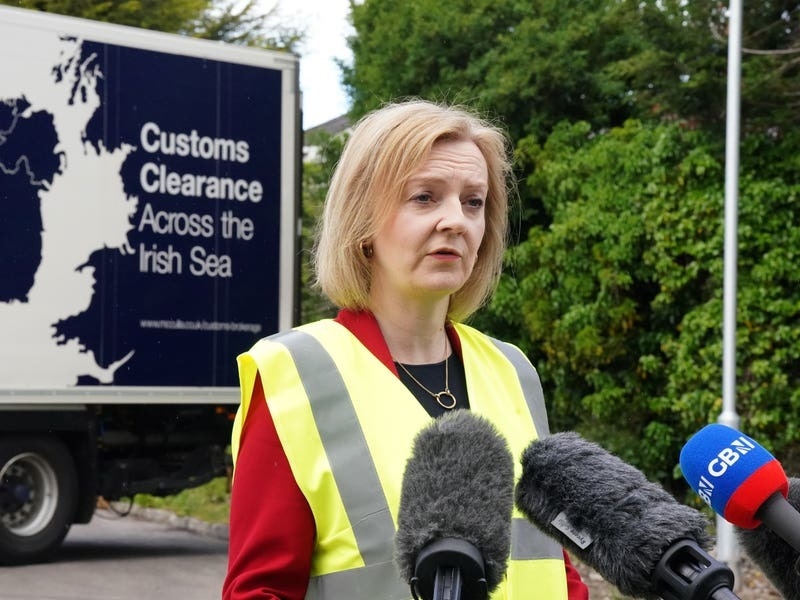 Foreign Secretary Liz Truss has said problems with the Northern Ireland Protocol cannot be allowed to “drift”, but insisted the post-Brexit agreement would not be scrapped.

Ms Truss, who is in Northern Ireland to visit companies affected by the protocol, pledged to remove “customs bureaucracy” whilst at the same time protecting the EU Single Market.

Her visit coincided with a trip to Londonderry by a group of Democratic and Republican delegates from the US house of representatives and senate, led by congressman Richard Neal.

Mr Neal said that issues with the protocol are for the UK and EU to sort.

Last week, Ms Truss announced an intent to table legislation at Westminster that would override parts of the protocol without the approval of the EU.

Speaking in Lisburn, Co Antrim, the Foreign Secretary said: “I am in Northern Ireland to talk about our solution on customs, putting in place a red and green lane to make sure that we remove customs bureaucracy for those goods that are travelling from Great Britain into Northern Ireland, so we can restore the balance between the communities and restore the working of the Belfast/Good Friday Agreement.

“We have had months of negotiations with the EU and our preference remains a negotiated solution but what we cannot allow is for this situation to drift.

“It’s very important that we deal with these practical issues, how we remove the customs bureaucracy whilst at the same time protecting the EU Single Market to resolve this situation.”

She continued: “What we have been clear about is the protocol is causing political instability, so we haven’t seen the Northern Ireland Executive in operation since February,” Ms Truss said.

“What we need to do is to make sure that as well as protecting north-south trade, we are protecting east-west trade.

“I have come today with practical solutions, making sure that we are sharing commercial data with the EU to protect the Single Market, at the same time as making it easier to trade goods into Northern Ireland from Great Britain.

He said: “People here took up much more severe challenges … this is an issue for the European Union and for the UK Government to sift and sort.

“I think we want to be mindful of the fact that the difference of opinion that existed from Brussels and London was substantial, and the Commission in the European Union, they suggested these problems were imminently solvable, and I think based on the conversations we had of good faith that is the case.”

Mr Neal has been criticised by unionists in recent days. He said he will have to chance to talk to DUP leader Sir Jeffrey Donaldson later.

“I have known him for a long period of time, I don’t want to trespass. I have had a good relationship with him over the years,” he said.