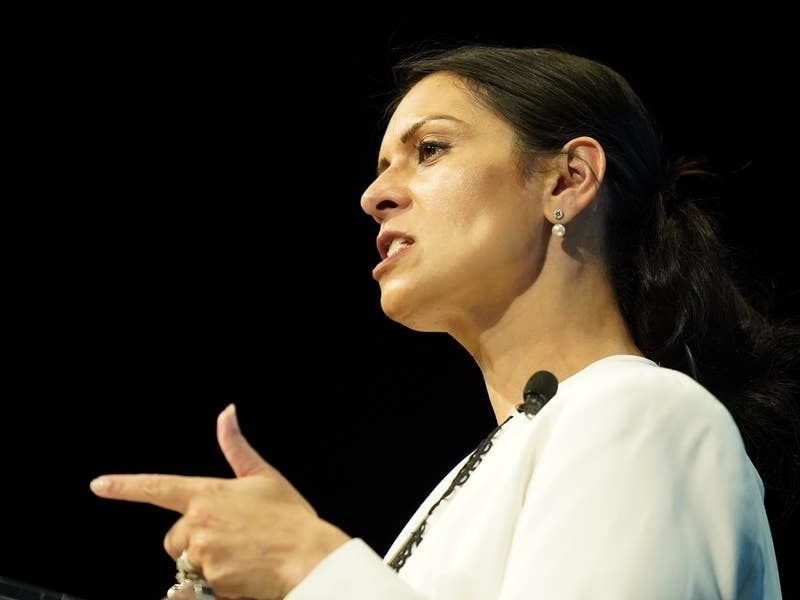 The Home Secretary was told to “put her money where her mouth is” when she was confronted by police over concerns about pay.

Priti Patel was told some officers were having to go to food banks while one detective constable, a single mother who had worked in policing for more than two decades, asked if she would be able to “survive” on £1,200 or £1,400 a month.

Vicky Knight, of North Wales Police, told the Police Federation annual conference how she had to borrow money from her mother and described herself and some colleagues as “desperately struggling to do the job that we love and to make ends meet”.

Rich Cooke, chairman of the West Midlands Police Federation, was met with cheers and applause from the audience when he told Ms Patel: “It’s about time you and your colleagues put your money where your mouth is and did something about the terrible state that our colleagues are finding themselves in.”

But answering questions afterwards at the event in Manchester,  groans could be heard when Ms Patel told delegates the federation – which represents more than 130,000 officers from the rank of constable to chief inspector – had not been “at the table” recently for pay negotiations.

The body is among police organisations embroiled in a row with the Government over a pay freeze for officers.

Ms Knight, who said she worked in child protection as well as with vulnerable adults and has been working in the police for 23 years, asked Ms Patel if she would be able to “survive” on £1,200 or £1,400 a month.

After paying professional subscriptions and pension, she said she takes home £2,300 a month and works overtime twice a month to “make ends meet.” Because wages are measured before pension deductions, she does not receive any support apart from child family allowance, telling the conference: “Apart from that I’m on my own”.

Describing how she is paid  “a couple of hundred pounds a month more than the workers in McDonald’s flipping burgers” and less than her “local manager at Lidl”, Ms Knight told how ahead of her most recent pay day she had to borrow £40 from her mother so she could put fuel in her car and buy food for her son’s school lunches “because I had no money left at the end of the month”.

She was met with applause when she asked: “I work … with the most vulnerable members of our community and I love my job.

Ms Knight added: “I tell this story not because I’m here for sympathy, I just want to be heard. I stand here to represent myself and many people in the force that are like me.

“We are desperately struggling to do the job that we love and to make ends meet at home. So I need you to be on our team and to help us, to represent us … to get us fair pay.”

Ms Patel said that pay and conditions was something she was “committed” to working with the Federation on and thanked Ms Knight for sharing her story, adding: “I think it just it really illustrates so strongly and powerfully why we need to actually find solutions to pay issues and actually give you the support that you rightly deserve.

“We have to move this forward. You have that commitment from me, you absolutely do.”

The federation’s national chairman, Steve Hartshorn, who took on the role in March, said the “lack” of pay “sticks in the throat” of officers and causes them the “greatest hardship”, asking Ms Patel: “What has gone wrong?”

He added: “Why are my colleagues one of the only groups of frontline public sector workers being penalised in their pockets?

“It’s frustrating to see and hear from colleagues who are struggling to feed their families and going to food banks.”

Last year the federation withdrew from the Police Remuneration Review Body (PRRB), an independent system that sets salaries, after widespread outrage over the Government’s decision to freeze pay for officers who earn more than £24,000.

The bitter row saw the federation pass a vote of no confidence in Ms Patel over pay, while chairman of the National Police Chiefs’ Council, Martin Hewitt, wrote to her to say that officers “deserve better”.

Responding to Mr Cooke, who also said officers had their pay “slashed” and pensions “ripped up” by the Government, Ms Patel replied: “I completely hear what you say. This is the issue where we have to start working together.

“The federation’s voice has not been at the table and that has been the problem. So we absolutely need to restart that.”

Mr Hartshorn added: “It’s really important to get us at the table, we need something to hold us at the table to make sure we’re going to be listened to properly and it holds the Government to account.”