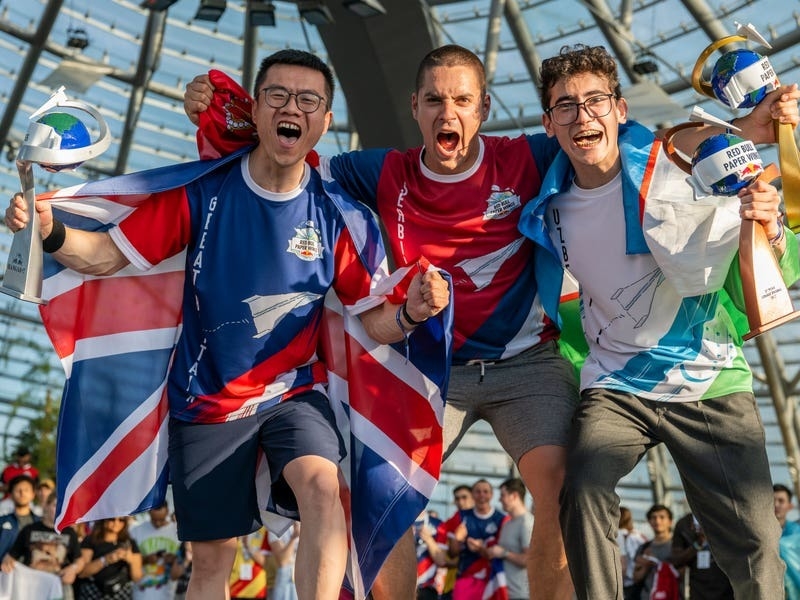 An aircraft designer representing Britain at the world’s biggest paper plane throwing competition has said he is “amazed” to have won second place.

Yicheng Sun, 32, was crowned runner-up at the Red Bull Paper Wings world super final by throwing a paper plane a distance of 57.07 metres.

“It is amazing, I can’t believe it,” Mr Sun told the PA news agency.

“When the competition starts, it’s really tough but I decided to take a risk and I ended up with (the silver trophy).”

Competitors from across the world were challenged to come up with the best aerodynamic designs and techniques in three categories: longest distance, longest airtime, and aerobatics.

Planes can only be modified by folding – no ripping, gluing, cutting, stapling or weighting of the plane is permitted, and the event was monitored by Guinness Book of World Records’ officials.

Student paramedic Billy Smith, who studies at Sheffield Hallam University, came sixth in the longest airtime and competed dressed in a pair of Union Jack shorts with a faux six pack of muscles.

Mr Smith told PA: “They had to turn the aircon on so I couldn’t throw my plane… so I was stood in the middle trying to entertain the crowd, dancing away and doing all sorts.

“I haven’t got any muscles myself so I thought I would (wear) some fake ones – a six pack and some good pecs – to use it to my advantage.

“I (wanted to) distract everyone else so they didn’t throw as well in the competition.”

Connor Wynn, 25, from London, represented Great Britain in the aerobatics category and finished in seventh place.

“I’ve never represented Great Britain for anything… I’ve lost my voice from shouting and supporting (my teammates).

“Granted it’s paper planes and not the most athletic of sports, but there is still skill involved.

“The atmosphere was incredible all weekend, a proper electric atmosphere.”

Although he did not win, Mr Wynn’s performance left a mark on the judge Costa who was impressed by the Brit’s decision to perform dressed as the superhero Batman.

“I really wanted to have a selfie with Batman,” Costa told PA.

“It’s a shame my son was not here because he is a big fan of Batman and he would have loved it.

“The competitors are using paper planes which is something we all grew up with, especially when I look back to my childhood when I was dreaming of being a pilot.

Other highlights of the event saw aerobatics winner Seunghoon Lee, from South Korea, propose to his girlfriend after being crowned the champion.

Mr Lee, who was dressed in a black three-piece suit, got down on one knee in front of the packed crowd at Hanger 7, and asked his girlfriend to marry him, to which she said yes.