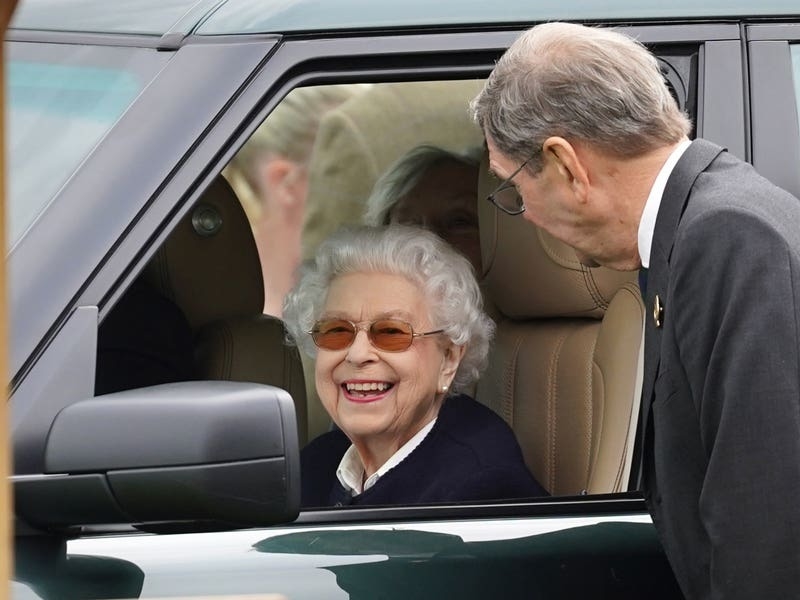 The Queen was all smiles when her horse was named supreme champion after she made a rare public appearance and joined crowds at an equestrian show.

Looking relaxed and laughing, the head of state sat in a vehicle and watched entrants in the parade ring as she chatted to officials from the Royal Windsor Horse Show and members of her staff through the open passenger window.

The 96-year-old monarch had reluctantly missed the State Opening of Parliament on Tuesday on the advice of royal doctors due to her continued mobility problems, and delegated her role to the Prince of Wales and Duke of Cambridge.

But despite concerns about her health, she appeared well and spent almost an hour at the parade ring close to her Windsor Castle home, and chatted for a long period with retired racehorse trainer Henrietta Knight.

The Queen had arrived to watch the Highland Class 64 event and her horse Balmoral Leia, a five-year-old grey dun mare, was named winner and was later announced as a supreme champion.

Dozens of members of the public were keen to have a memento of the occasion and held up camera phones to record a glimpse of the Queen.

She said: “I didn’t expect to see her that was a wish, a dream, but never a possibility. I came along for the ride and got the ride of my life.

“We were 10ft from Her Majesty, she was exactly as I expected, with perfectly quaffed hair – she was perfect. It was a moment I’ll never forget, I even made eye contact.”

The monarch was last seen in public when she attended a service commemorating the life of her husband, the Duke of Edinburgh, in March and more than a dozen photographers were on hand at the horse show to capture the moment.

The Queen was spotted wearing a headscarf and using a walking stick as she made her way to her seat in the royal box, and was reward when her earlier winning horse beat other breed champions to be named winner in the Horse & Hound Mountain and Moorland Supreme in Hand Championship.