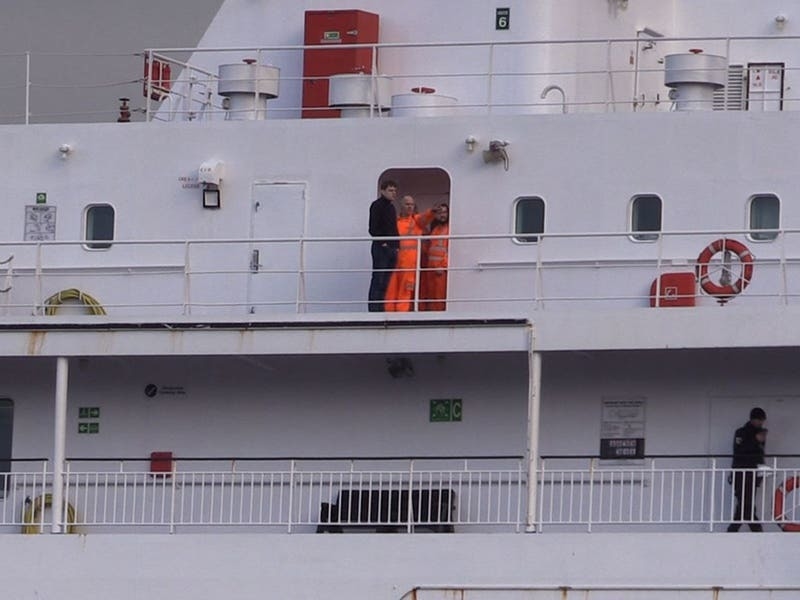 Politicians in Northern Ireland have reacted with shock after ferry giant P&O sacked 800 seafarers and replaced them with cheaper agency workers.

There were calls for the UK Government to intervene to ensure the “vital” Larne to Cairnryan service continued.

DUP representatives said on Thursday that a conversation with the chief executive of P&O had assured them that there would be no redundancies at Larne Port as a result of the action taken by the company.

The ferry operator, bought by Dubai-based logistics giant DP World in 2019, has insisted the decision to cut jobs was “very difficult but necessary” as it was “not a viable business” in its current state.

But the move has been met with concern in Northern Ireland.

Infrastructure Minister Nichola Mallon said she was “shocked” by the news.

“This is a developing situation and officials are working on a cross-departmental basis to assess any local impacts, especially for supply chains, and are keeping in close contact with their counterparts in the Department of Transport in London.”

She called on the Secretary of State for Transport, Grant Shapps, to “take every possible step to save jobs and to maintain connectivity for passengers and freight on Irish Sea routes”.

These concerns were echoed by the DUP MP Sammy Wilson and MLA Gordon Lyons, the Northern Ireland Economy Minister.

Mr Lyons said the decision would have an impact on the wider Northern Ireland economy.

“The company have informed us that it will be another week before ships can operate from Larne Port,” he said.

“Whilst customers have been directed to Belfast Port in the short-term, they will not have the capacity to ramp up operations in a sufficient manner to accommodate demand.

“With over half of all our freight moving through Larne Port, this announcement will also cause supply problems for companies and supermarkets in Northern Ireland, as well as those firms based here who sell to GB.”

“The chief executive of P&O has assured us that there will be no redundancies in the Port of Larne and that the company will be making an investment in the future to enhance the attractiveness of the port,” he said.

“Whilst this is welcome, it does not make today’s announcement and the manner in which it was done any more acceptable.”

Meanwhile, Mr Wilson said that the treatment of staff was “unacceptable” and accused the company of paying “third world wages” to the crew.

“Therefore, I am sorry to inform you that this means your employment is terminated with immediate effect on the grounds of redundancy.”

Mr Wilson said that while speaking to the P&O boss, he expressed his concern “at the manner in which the staff, who are to be made redundant, have been treated”.

“I have been assured by the company that staff will be compensated for the lack of notice of termination,” he said.

“The way in which staff were removed from the ships is totally unacceptable and is not how any employer should treat their employees.

“Despite operating purely between UK ports, P&O will now be paying third world wages to their crew. This raises serious concerns about the company’s morality.”

The Sinn Fein economy spokesperson in Northern Ireland, Caoimhe Archibald, said that the treatment of workers had been “shameful”.

“At a time when soaring prices are exacerbating a cost-of-living crisis, that a company would make workers redundant in such an arbitrary fashion is disgraceful.

“I extend our party’s solidarity with those workers and their families who are today receiving this awful news.

“I have written to the DUP economy minister asking what contact he has had with worker representatives and urging that all efforts are made to support workers and protect jobs including representation to the British Transport Minister.

“P&O must be held accountable for these unscrupulous actions and the British government needs to take action in defence of these workers,” she said.

Stewart Dickson, the Alliance Party MLA in East Antrim, called for urgent clarification and urged the Department for the Economy to engage with P&O.

The Ulster Unionist Party MLA for the area, Roy Beggs, said that ferry staff had been treated “brutally”.

“I have never heard of a company treating its staff and customers so poorly,” Mr Beggs said.

“This does not bode well for the immediate future of the Northern Ireland economy.

“Ferries have been cancelled for the foreseeable future, leaving passengers and time-sensitive freight scrambling to book on the rival Stena Belfast to Cairnryan route.

“There is also an urgent need to clarify the status of staff at both the Port of Larne and those at the Port of Cairnryan.”