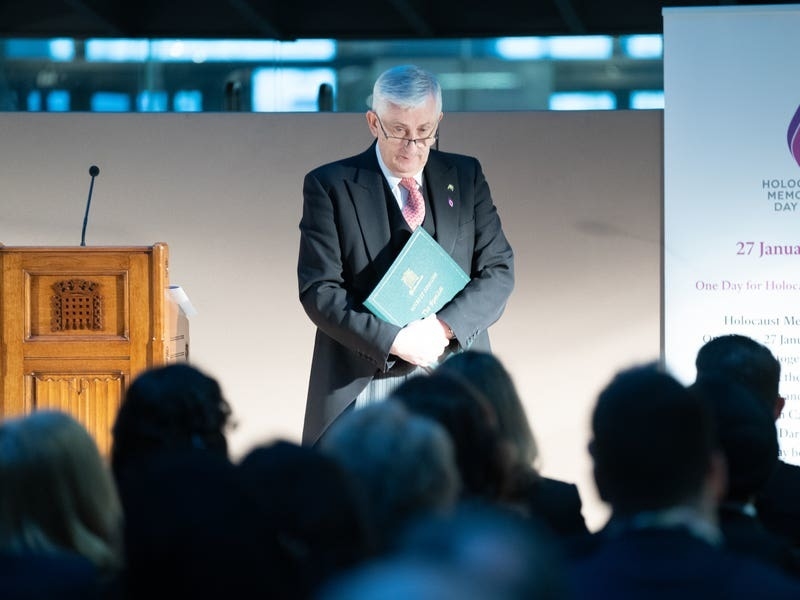 Commons Speaker Sir Lindsay Hoyle urged people to call out intolerance and work together to build a “happier future” at a special ceremony in Westminster to mark Holocaust Memorial Day.

Candles were lit at the service in Portcullis House to reflect upon the six million Jews murdered during the Holocaust, and on genocides that followed in Cambodia, Rwanda, Bosnia and Darfur.

It was intended that Labour MP Dame Margaret Hodge would light one of the candles at the commemoration, but she was unable to attend after testing positive for Covid-19.

“Our world often feels… vulnerable, and we cannot be complacent. Here in the UK, as elsewhere, prejudice and the language of hatred must be challenged by us all.”

Closing the ceremony, he added: “I hope it has given us all pause for thought to consider how we might call out, counter messages of hate, intolerance, and instead work together to create a better, safer, and a happier future.”

Speaking to the PA news agency after the event, the Commons Speaker said: “This event was absolutely important to me. Holocaust (Memorial) Day, and remembering, bringing the House together, whether it’s staff (that) work for the House, whether it’s MPs, peers, journalists, we all came as one. And that… was so important. We stood shoulder to shoulder.

“We are calling out hatred, racism, intolerance, because we believe that we shouldn’t forget six million lives that were persecuted, taken away by the Nazis, right through to Darfur.

“It was about making sure we were there together and showing unity. And quite rightly, it was that (which) mattered to me more than anything. It’s about this House. We did it last year. That was the beginning. And today’s not the end. May this continue for future parliaments.”

“So one day to me is about us being together, sharing our common belief, our common thread that runs through of decency and support for each other. That’s what one day’s about.”

Holocaust Memorial Day takes place each year on January 27, which marks the anniversary of the liberation of the Auschwitz-Birkenau concentration camp, the largest Nazi death camp, in 1945.

Earlier on Thursday, Conservative MP Robert Jenrick revealed the content of a death threat letter he was recently sent, as he shared the extent of antisemitic abuse he and his family have received.

The former Cabinet minister opened a debate on Holocaust Memorial Day 2022 in the House of Commons, warning about the rise in antisemitism online in recent years.

“I recently received a letter telling to me to ‘teach my Jewish Zionist wife to put out fires’, as they intended to burn our house down and cremate our children.”

Asked after the memorial event in Portcullis House what could be done to tackle such abuse, Sir Lindsay told PA: “No Member of Parliament, no-one should have to stand up or put up with abuse. We’ve got to stand together.

“But if that is a Member of Parliament, quite rightly I am there to support them. We also have that support that we will protect MPs – them, their families, their staff, because in the end, democracy matters to me.”