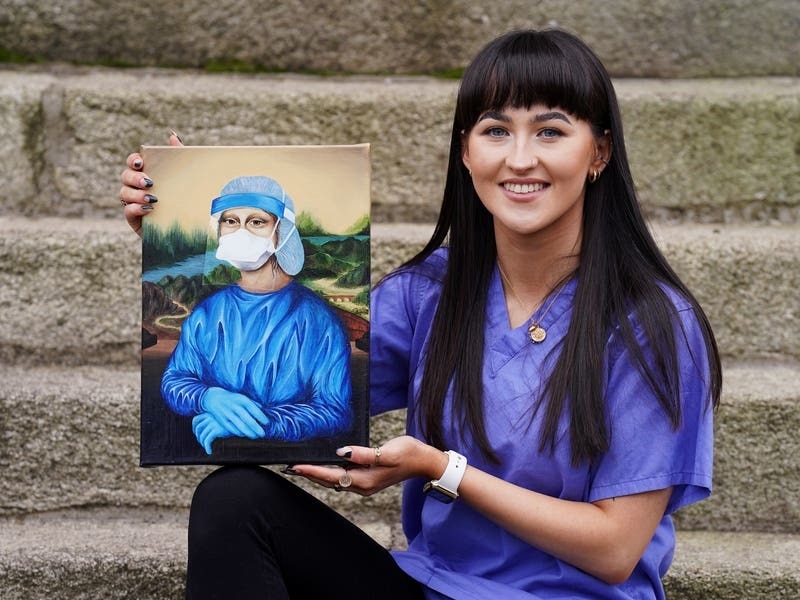 A trainee nurse who reinterprets artistic masterpieces to tell the story of the pandemic has painted the “Corona Lisa” to raise money for charity.

The 21-year-old, who is a third year nursing student at University College Dublin, is auctioning the painting to raise funds for Ireland’s children’s hospice LauraLynn.

She drew inspiration from her experiences during a recent placement on a children’s emergency ward.

“I loved this placement but it was a very tough time. There I experienced my first paediatric cardiac arrest and that’s something you’d never forget. You never forget the moment you got that phone call, we ran in to put on our PPE and we did everything we could.

“It was probably the toughest thing I’ve gone through so far, it was an incredibly difficult time. The impact it had on me, I still get emotional talking about it today. With this painting, I was able to turn to this and use that as my own form of art therapy and a distraction.

“I suppose the painting holds a special place for me now because of where it came from and it shows what myself and so many other healthcare staff have been going through during Covid.

“You’re smothered in PPE and it’s tough. It was a very tough placement but I hope to one day get a job there. That’s my dream to work in an emergency department.”

Earlier in the pandemic she painted the outstretched hands in Michelangelo’s The Separation Of Adam wearing surgical gloves.

She also created the Girl With A Surgical Mask in a nod to Johannes Vermeer’s Girl With A Pearl Earring.

That raised 400 euro (£335) for the Feed the Heroes charity, which delivered food to hospital and emergency workers during the height of the pandemic.

Ms Slevin said she has learned a lot about the palliative care offered to children at LauraLynn during her course, including art therapy, and she wants to support its work.

“They’re such an important charity and the work they do for these families is amazing, so I really want to put this one out there for them,” she said.

“One of the things we always say is that we can’t add days into a child’s life but we can make those days mean more, and we can help families create memories,” she said.

“Art is so important and it really gives our children, especially those who might be non-verbal, the chance to communicate.

“Most children love art and they love painting and anything like that. It is amazing to see a child enjoy something like that and gosh we probably have more bits and pieces of children’s art in the hospice than I think any school in Ireland, it’s just amazing.”

An online auction for the Corona Lisa will be run on the website of auctioneer Herman & Wilkinson from 10am on January 31 to 6pm on February 3.

Bids can be placed at https://www.herman.ie/.