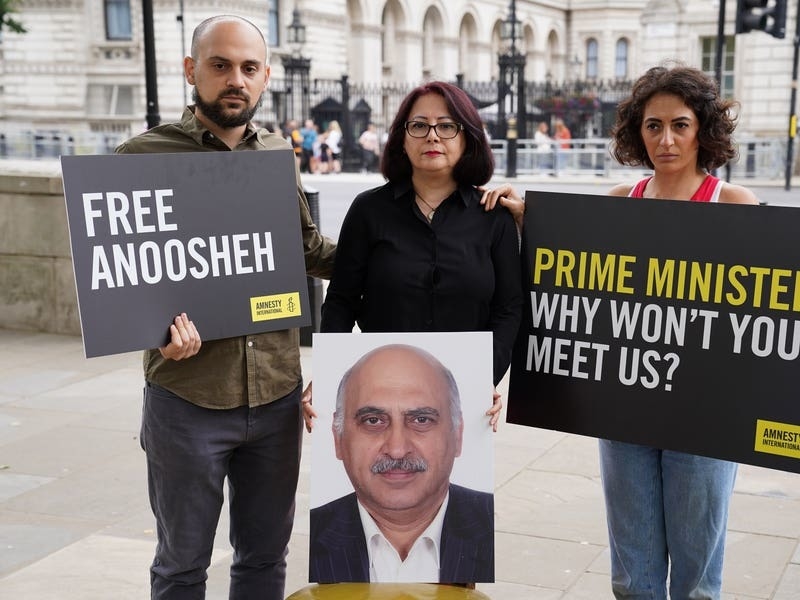 The daughter of a British-Iranian detained in Iran says her father will begin a hunger strike on Sunday due to the Foreign, Commonwealth and Development’s (FCDO) lack of “any progress” in securing his release.

Retired civil engineer Anoosheh Ashoori has been held at Tehran’s Evin prison on charges of spying for Israel, which he denies, for more than four years.

Elika Ashoori said her father would undertake a hunger strike from Sunday in “full solidarity” with others including former US diplomat Barry Rosen to demand Iran release all foreign and dual-national “hostages”.

“My father, who has been held hostage by Iran for the past four-and-a-half years, has decided to join their hunger strike from Evin prison,” Ms Ashoori said in the video posted on Twitter.

“Needless to say, we are extremely concerned for his physical health as he approaches his 68th birthday.

“But having failed to see any progress in the FCDO’s efforts to bring about his release and no sign that the welfare of hostages currently held by Iran is a priority of the respective US, Europe and UK governments, he will begin his hunger strike in the hope of bringing global attention to the plight of these individuals held by Iran.

“Please help us by sharing this message using the hashtag #FreeTheHostages.”

Mr Rosen, who was one of 52 Americans held hostage in the US embassy in Iran following the Islamic Revolution in 1979, began his hunger strike in Vienna on Wednesday as he called for Tehran to release all foreign nationals before it is allowed to reach a nuclear agreement with the West.

It comes after the husband of Nazanin Zaghari-Ratcliffe spent almost three weeks in November on a hunger strike outside the FCDO in central London, with Richard Ratcliffe saying his family was “caught in a dispute between two states”.

According to her family, Mrs Zaghari-Ratcliffe was told by Iranian authorities that she was being detained because of the UK’s failure to pay an outstanding £400 million debt to Iran.

Mr Ratcliffe said the Government “clammed up” and would not talk about the debt during his discussion with them.