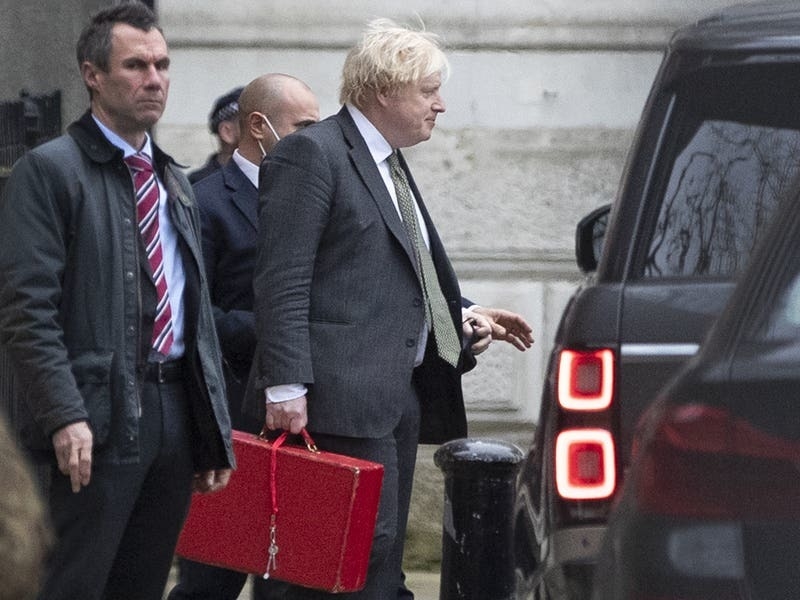 Boris Johnson is facing mounting pressure to get a grip on the drip feed of revelations about No 10 rule-breaking as he fights to stay in office.

A sixth Conservative MP on Saturday came forward to call for the Prime Minister to quit over the way he has handled the so-called partygate revelations.

Former children’s minister Tim Loughton, in a post on Facebook, said Mr Johnson’s position had become “untenable” and that his “resignation is the only way to bring this whole unfortunate episode to an end”.

Earlier in the day, senior Tory Tobias Ellwood said the Prime Minister must “lead or step aside”, telling the BBC: “We need leadership.”

The comments by the chairman of the Commons Defence Committee came as further claims emerged of regular “wine time Friday” gatherings in Downing Street while coronavirus rules were in place.

The newspaper said staff bought a £142 fridge to keep their bottles of alcohol chilled, and the Prime Minister was aware of the socialising.

A No 10 spokeswoman said: “There is an ongoing investigation to establish the facts around the nature of gatherings, including attendance, setting and the purpose with reference to adherence to the guidance at the time.

“The findings will be made public in due course.”

Ministers have called on disgruntled Tory MPs to wait until senior civil servant Sue Gray has published her investigation into claims about lockdown-busting parties in Government.

The North West Leicestershire MP confirmed he submitted a letter of no confidence in Mr Johnson’s leadership “some time ago”.

Only a handful of Tories have publicly declared they have submitted letters to the 1922 Committee of backbench MPs, but the Telegraph said sources estimated about 20 might have been handed in – although that is well short of the 54 needed to trigger a leadership vote.

Mr Bridgen, asked by BBC Breakfast about reports of “wine time Friday” sessions in Downing Street during lockdown, said: “It doesn’t matter, quite honestly, if the Prime Minister was present or not present.

“I’m not sure that any apology is going to put that right.”

He told the Fabian Society conference in London: “The moral authority matters, of course, in relation to Covid, but we’ve got other massive challenges facing this country.

“We’ve got a Prime Minister who is absent – he is literally in hiding at the moment and unable to lead, so that’s why I’ve concluded that he has got to go.

“And of course there is a party vantage in him going, but actually it is now in the national interest that he goes, so it is very important now that the Tory party does what it needs to do and gets rid of him.”

Witnesses said alcohol was drunk and guests danced to music as two after-work events merged on April 16 2021, with a person sent to a local shop with a suitcase to buy wine, according to the Telegraph, which first reported the allegations.

Former minister Andrew Percy said he was “irritated” that staff could not see that such alleged behaviour was “not acceptable”.

The Tory MP for Brigg and Goole told Sky News: “Getting drunk in the basement – I know the Prime Minister wasn’t there – at No 10 the night before the Duke of Edinburgh’s funeral, clearly you should have known that is not acceptable behaviour.

“So I’m frustrated, I’m irritated, as I think a lot of my constituents are as well.”

Ms Gray is said to have been “completely blindsided” by the latest leaving do revelations, the Times reported.

It comes as the SNP called for Ms Gray to be stood down from the inquiry, calling instead for a judge-led probe to ensure the investigation is independent.

The party’s response follows briefings that her report, which is seeking to record the facts behind the allegations, could censure Mr Johnson for a lack of judgment but cannot rule on whether he breached the Ministerial Code as that is outside her remit.

SNP MP Brendan O’Hara said: “Any suggestion that the findings from this internal inquiry led by Sue Gray could be independent has been smashed – it has already been used to brief journalists in advance that Boris Johnson will only be given a slap on the wrists.

“This report risks being a Whitehall whitewash – another scandal brushed under the Number 10 carpet.

“The SNP has been clear that only a judge-led inquiry, which is independent of government, is fit to properly investigate the countless rule-breaking drinking parties.”