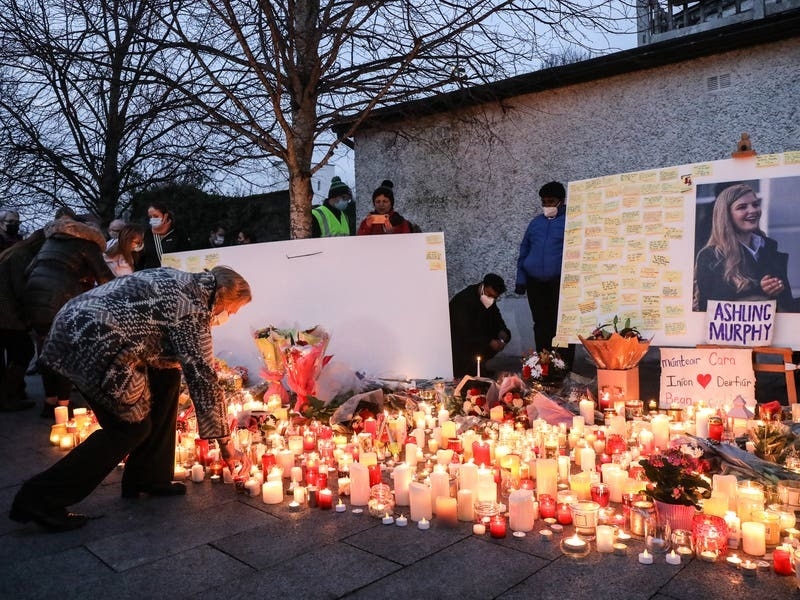 The town of Tullamore gathered together on Friday evening as a vigil was held for Ashling Murphy.

Irish police are continuing to hunt for the killer of the 23-year-old, who was found dead on Wednesday after going for a run on the banks of the Grand Canal in the Co Offaly town.

Thousands of people made their way to Town Park on the edge of Tullamore, pledging to send “solidarity and support” to Ms Murphy’s family.

As the light dimmed on Friday evening, traditional Irish music – played by friends and former teachers of Ms Murphy – formed the centrepiece of the service.

She described her protege as a “fabulous musician”.

Ms Brady also taught Ms Murphy at the Sacred Heart girls’ secondary school, where they played together in the traditional music group.

The musicians played two tunes at the vigil that Ms Murphy would have performed with the trad group.

“She was the most beautiful girl inside and out,” Ms Brady said.

“She was never in bad humour, she was always smiling and she absolutely loved her fiddle. Her parents only told me yesterday that she never had to be told to practice. She was bright and energetic and everybody loved her.”

Prayers were said for the family, friends, and pupils of Ms Murphy, as well as for all women who have suffered violence.

A local priest, Father Joe Gallagher, addressed the vigil before calling for a minute’s silence.

He told the gathering, which was attended by all the main religious groups in the area: “We remember her heartbroken family, her colleagues in work, in music, in sport, in friendship and her young pupils in first class who loved their teacher.

“This is a time of grief beyond words. We need to be together. We need to support one another in this dark time.

“In this dark evening we want to hold a light in our hands, to stand together in solidarity with one another to share our tears and deep grief. Time to pray, to reflect, to listen, to be together.”

Women at the vigil spoke of their anger and fear.

Roslyn Kavanagh, who works in Tullamore, said: “I feel that this shouldn’t happen at all in society. And as a woman, I have felt, in places, insecure and vulnerable and as a woman I should not feel like that.”

She said the attack prompted her to share her experiences with her husband.

“He was shocked and annoyed that he knew I felt like that,” she said.

“I feel society needs to put an end to this and stop this.”

“We are taught as young women, on nights out, you stay with your friends. You never leave them, you text them to make sure they get home safe. Now we’re going to be expected to do that in daylight.

“Now we have a plan in work that we’re all going to walk each other to our cars and make sure everyone is okay, and have a group chat (asking), ‘Have you gotten home OK?’

“It shouldn’t be like that. The reason why I’m here is that it is time for women to make a stand and go, ‘No more, we’re done’.

“We have to be treated equally to men.”

Things have changed in the town since the attack, both agreed.

They said they were “paranoid at all times now”.

The vigil heard a poem specially written for Ashling by local woman Sinead Cullen, who wrote: “There is a light that will shine for you, through every hour, sky black or blue.”

Ms Murphy’s grieving parents Kathleen and Ray, and her sister Amy and brother Cathal, linked arms as they attended a separate candlelit vigil later in the evening near the spot where the teacher was killed.

In a tribute to his youngest daughter, Ray Murphy played her favourite song, When You Were Sweet Sixteen on the banjo.