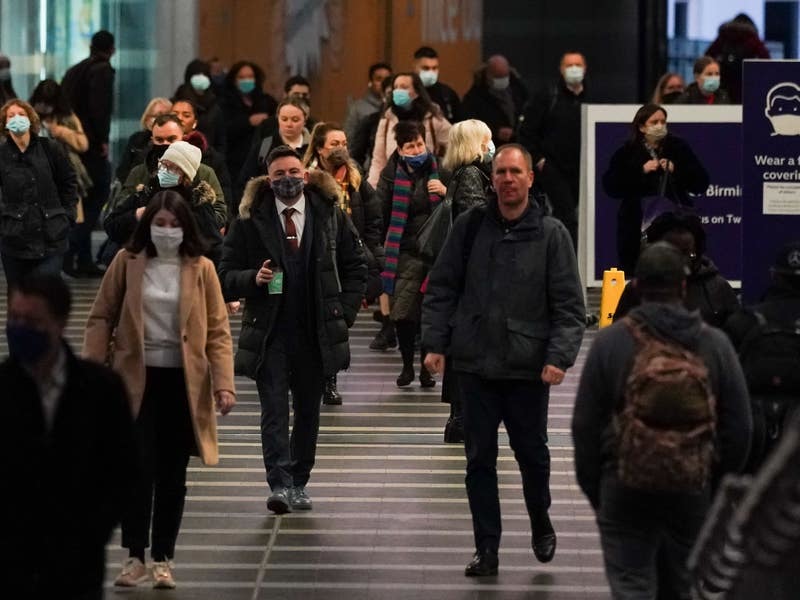 The head of the UK’s Health Security Agency has urged people not to socialise if they do not need to as a health minister insisted that “of course, Christmas is on track.”

Dr Jenny Harries said people could do their bit to slow the spread of the new Omicron variant by reducing the number of social contacts they have as she urged people to have their booster jabs.

It is thought the variant could be more transmissible and may reduce the effectiveness of vaccines, though England’s deputy chief medical officer, Professor Jonathan Van-Tam, has said jabs may still prevent severe disease.

Dr Harries told BBC Radio 4’s Today programme that even if our “vaccines appear to be effective, but we find that the variant is more highly transmissible, having lowish grade infection, but in very large numbers of the population, (it) could still be a significant impact on our hospitals.

Asked whether people should be told to work from home in England, as is happening in Scotland, Wales and Northern Ireland, she said: “We’ve seen that not everybody has gone back to work and I’d like to think of it more in a general way, which is if we all decrease our social contacts a little bit, actually that helps to keep the variant at bay.

“So I think being careful, not socialising when we don’t particularly need to and particularly going and getting those booster jabs which, of course, people will now be able to have at a three-month interval from their primary course.”

In October, the Scientific Advisory Group for Emergencies (Sage) said that Plan B measures should be implemented in unison to have the biggest effect in tackling any surge in coronavirus cases.

Out of the individual measures, Sage said working from home would have the biggest impact.

All travellers returning to the UK must also take a PCR test and self-isolate until they receive a negative result.

On Tuesday afternoon, Prime Minister Boris Johnson will hold a Downing Street press conference to urge people to have their booster jabs when called forward by the NHS.

Dr Harries said the Sage advice was to bring in working from home if there was a surge in cases but she stressed there were still only a low number of confirmed cases of Omicron.

“So it’s a very early stage for this, I think, but certainly, if we see surges, then working from home will be a good thing to do,” she added.

Asked whether the UK would see a return to work from home guidance, she told BBC Breakfast: “The whole point about the booster programme and the introduction of mandatory face mask wearing in enclosed public spaces is exactly to try and avoid that because we’ve made huge progress, we have great defences and, in the background, the dominant strain in the UK at the moment is very definitely Delta.”

Elsewhere, the health minister, Gillian Keegan, told Sky News the Government is “very much hoping that we can keep Christmas on track”.

Asked about the prospect of Christmas plans being called off, Professor Paul Moss, from the Institute of Immunology and Immunotherapy at the University of Birmingham and a member of Sage, told Sky News: “I don’t think we need to worry too much about that at this stage, the measures that we got in place have a good chance of gaining some control here.”

He said much more would be known about the variant before Christmas, adding: “You probably saw that the doctor in South Africa, who initially identified it, had seen relatively mild cases, which is very encouraging.

“However, you know, that’s a much younger population.

“It’s the elderly population, we need to worry about – in South Africa only 6% are above 65 years whereas we’ve got a much higher proportion.”

Meanwhile, Professor Adam Finn, a member of the Joint Committee on Vaccination and Immunisation (JCVI), said that now is a “time for caution” as he urged people to do “anything that they can do to reduce the risk” of catching Covid-19.

“So I’m very pleased that people are now being encouraged to wear masks when indoors at the moment, lateral flow tests are a very good way of finding out whether or not you’ve got the infection, so people should carry on doing those.

“But, at this particular time, it is a time for caution.

“It’s a time for people to be careful, to stay at home when they can to avoid contact with others, just to help us get through this difficult period.”

Asked about Christmas, he added: “Well, certainly, we don’t want to cancel a Christmas yet again.

“But in the build-up to Christmas the more we can keep a watchful eye open for this virus, we reduce the risk of getting exposed to it.

“So there’s a lot we can do to minimise the risk.”

In the US, Pfizer’s chief executive, Albert Bourla, said during an interview that the firm has already started making a vaccine against the Omicron variant.

He told the US business news channel CNBC: “Within 95 days, basically we will have a new vaccine.”