What do we know about the Omicron variant and how worried should we be? 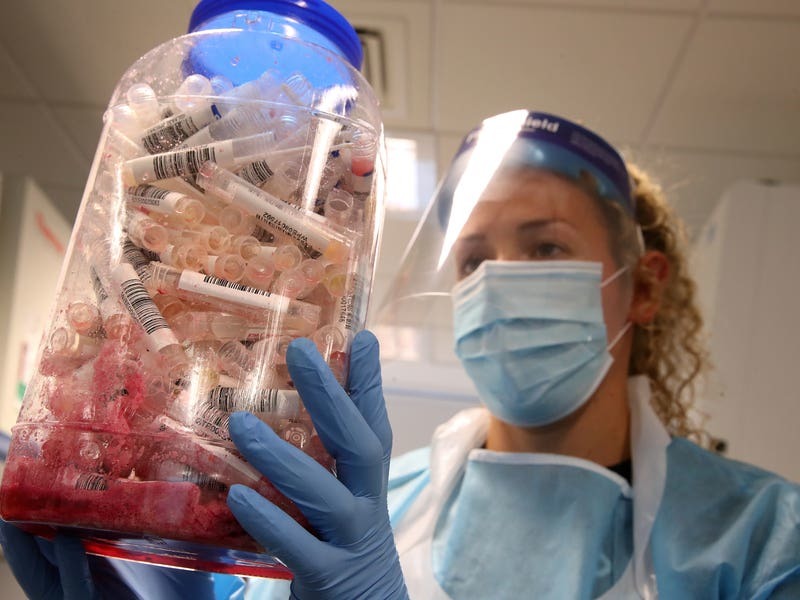 The new Omicron coronavirus variant has shown the “pandemic is far from over”, Sajid Javid has said after two cases were discovered in the UK.

The two linked cases have been found in Nottingham and Brentwood, Essex. The two cases are believed to have been contracted in southern Africa, the Health Secretary told BBC News.

Scientists have said they are concerned about the B.1.1.529 variant as it has around 30 different mutations – which is double the number present in the Delta variant.

How else is this new variant different from previous versions and how dangerous is it?

UK scientists first became aware of the new strain on November 23 after samples were uploaded on to a coronavirus variant tracking website from South Africa, Hong Kong and then Botswana. A total of 59 samples have been uploaded to the website so far.

Three samples are from Hong Kong, three are from Botswana and the rest are from South Africa.

On Friday, it was confirmed that cases had been identified in Israel and Belgium and on Saturday, Health Secretary Sajid Javid said two cases had been found in the UK.

– What do we know about the cases in the UK?

There are two known cases of Omicron in the UK that have been traced back to southern Africa. Updated information from Essex County Council said the cases, which are linked, are in Brentwood and Nottingham and those who tested positive are self-isolating and contact tracing is being carried out.

He said anyone who has travelled to the 10 countries placed on the red travel list – Angola, Mozambique, Malawi, Zambia, South Africa, Botswana, Lesotho, Eswatini, Zimbabwe and Namibia – in the last 10 days must isolate and take a PCR test.

He described the new variant as “deeply concerning”, and said: “I think the importance of them, especially the booster vaccine, is now even more important.”

Yes. Flights from South Africa, Namibia, Lesotho, Botswana, Eswatini and Zimbabwe were suspended from midday on Friday and all six countries have been added to the red list.

On Saturday, Angola, Mozambique, Malawi and Zambia were also placed on the red list.

Mr Javid told the House of Commons on Friday that discussions are ongoing on whether more countries should be added to the list.

– What does this mean for travellers?

The UK and Scottish governments and Northern Ireland Executive said on Thursday that UK and Irish residents who arrived between midday on Friday and 4am on Sunday, and who have been in the 10 countries within the last 10 days, must quarantine at home for 10 days and take NHS PCR tests on day two and day eight, even if they already have a lateral flow test booked.

Passengers – including UK and Irish residents – arriving from 4am on Sunday will be required to book and pay for a Government-approved hotel and quarantine for 10 days. They must also take tests on day two and day eight.

Direct flights from the 10 nations to the UK are being temporarily banned until 4am on Sunday, for the quarantine hotels to be set up.

Residents in the Republic of Ireland will also have to undergo testing and quarantining if they have recently returned from South Africa. The Irish Government has it will align with the EU recommendation to apply the “emergency brake” and to discourage travel to or from Botswana, Eswatini, Lesotho, Mozambique, Namibia, South Africa and Zimbabwe, Angola, Malawi and Zambia.

Other countries including Germany, Italy, France, Israel, Japan and Singapore have also restricted travel over the variant.

– How is Omicron different from the other variants?

Despite only being tracked for the past five days, the virus has already been found to have 30 different mutations.

The mutations contain features seen in all of the other variants but also traits that have not been seen before.

England’s chief medical officer Professor Chris Whitty said: “We will continue to work closely with the international community to quickly gather and analyse information on this variant to understand any possible increase in transmissibility or resistance to vaccines.

“It is important that everyone takes sensible precautions – get a PCR test if you have symptoms, isolate when asked, wear a face covering in crowded and enclosed spaces, ventilate rooms, get your vaccine and boosters as soon as you can.”

Dr Susan Hopkins, chief medical adviser of the UK Health Security Agency (UKHSA), told BBC Radio 4’s Today Programme: “If we look at those mutations, there’s mutations that increase infectivity, mutations that evade the immune response both from vaccines and from natural immunity, mutations that cause increased transmissibility.

“It’s a highly complex mutation, there’s also new ones that we have never seen before.”

Dr Jenny Harries, chief executive of the UKHSA, said: “We have identified these cases thanks to the UK’s advanced sequencing capabilities which means we are able to find variants and take rapid action to limit onward spread. We are particularly grateful to public health colleagues in South Africa for early sharing of information on the Omicron variant to support global health security.

“We are continuing our efforts to understand the effect of this variant on transmissibility, severe disease, mortality, antibody response and vaccine efficacy.”

It is too early to say. Work is under way to see whether the new variant may be causing new infection in people who have already had coronavirus or a vaccine, or whether waning immunity may be playing a role.

Professor James Naismith, director of the Rosalind Franklin Institute in Oxford, has said the new variant will “almost certainly” make vaccines less effective, though they would still offer protection.

Pfizer/BioNTech, which has produced a vaccine against Covid-19, is already studying the new variant’s ability to evade vaccines.

Experts have said vaccines can be tweaked to tackle new variants as they emerge.

Mr Javid said: “We know this is new out there. We don’t know enough about it yet. But for what we do know, we know that the protections that we have, especially the vaccines, are hugely important.”

– Has it been classed as a ‘variant of concern’?

Yes. On Friday evening, the World Health Organisation designated it a variant of concern and named it Omicron.

It follows UK ministers and scientists stating they are very concerned about the variant.

There are fears the virus transmits more easily and that it could be more deadly and evade vaccines. However, scientists have said it is too early to confirm if all of these fears are correct.

They are eager to acquire live virus cultures so it can be examined, but this takes time. It can take seven to 10 days at least to grow enough virus that can be shared with other scientists so they can study how it mutates and changes.

Officials will now also have to wait for data to come from South Africa. The earliest they are expecting evidence to come through is two to three weeks, but it could be as long as four to six weeks.