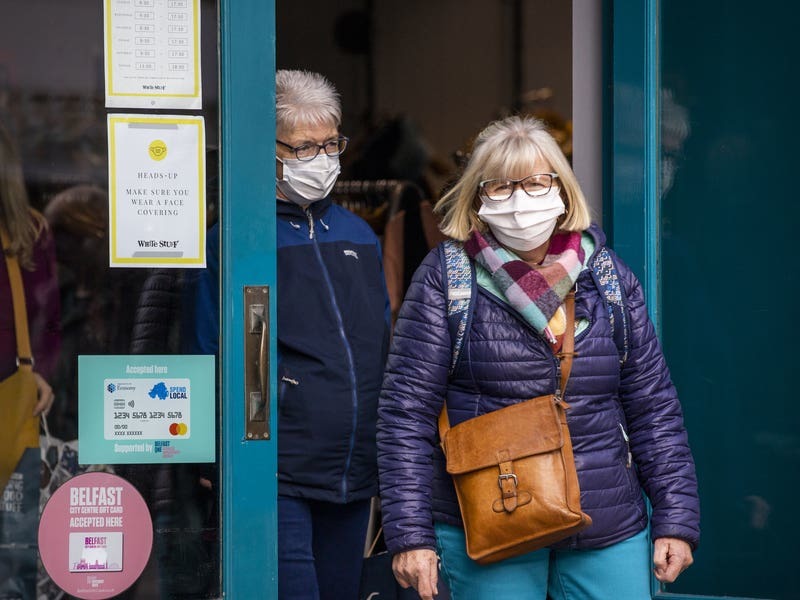 Face coverings will be made compulsory in shops and on public transport in England from next week, the Prime Minister has said.

Boris Johnson confirmed the move in a press conference called after two cases of the Omicron variant of coronavirus were detected in the UK.

The rules surrounding face masks were relaxed in England in July.

The Prime Minister said hospitality will be exempt from the rule change, and further details will be outlined by the Health Secretary “in the course of the next day or so”.

The change comes after two cases of Omicron both linked to southern African were discovered in Essex and Nottingham, and 10 countries, including South Africa, Namibia and Botswana, were placed on the UK’s red travel list.

Reacting to the news that face coverings will again be mandatory in England, Greater Manchester Mayor Andy Burnham tweeted: “This is right but shows why they shouldn’t have been relaxed. It will now be harder, and take longer, to get levels of compliance up to where we need them to be.”

Nottingham Labour councillor Adele Williams said the city has been asking for rules around face masks to be put back in place for “some time”.

She tweeted: “At last government has seen fit to back coverings in crowded indoor settings. It was irresponsible to make it a matter of personal choice. We have been asking for a mask mandate for some time and we know Nottingham will mask up to stop the spread.”

Usdaw general secretary Paddy Lillis said there was “no reason why” face coverings could not have been kept in place when the Government relaxed restrictions in July.

He said: “This flip-flopping on basic and sensible Covid measures and the different rules across the UK create confusion, reduce compliance and can lead to conflict.

“Retail staff working with the public every day are deeply worried about catching Covid-19 and the arrival of the Omicron variant is a further concern.

“Wearing a face covering protects others, it should not be a personal preference, but a personal responsibility.

“The Government must be clear and consistent on it being mandatory and that shopworkers are not expected to enforce the law on face coverings.

Association of Convenience Stores chief executive James Lowman said: “We are helping retailers to prepare for the change in face covering rules, but they are extremely concerned about abuse against their staff from customers who don’t want to wear a face covering in a shop.

“We will continue to urge stores to communicate the rules, but not to challenge those who refuse to abide by the rules.”

Carol Popplestone, chairwoman of the Royal College of Nursing, said: “This is something we have already called for and it should not have been a new variant that forced the Prime Minister to act.

“Nursing staff have already witnessed the devastating impact of delayed action and ministers must now be prepared to act immediately if further restrictions are needed.”

The Prime Minister was joined by England’s chief medical officer Professor Chris Whitty and chief scientific adviser Sir Patrick Vallance, who told the press conference that the UK may need to “face up” to the possibility of further action if the Omicron variant is very transmissible.

“If it’s very transmissible and does cause big (vaccine) escape, then clearly that’s a major issue we have to face up to.”