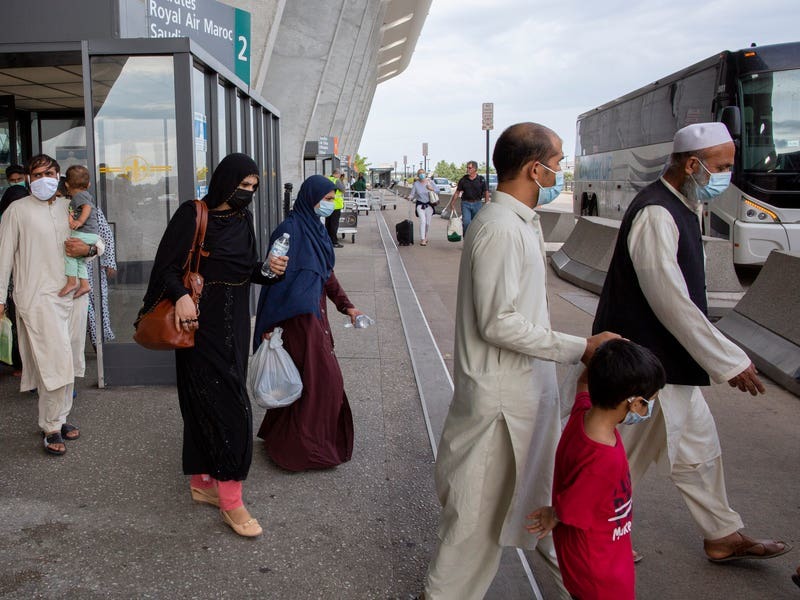 A refugee who worked as an RAF translator in Afghanistan is helping efforts to bring his fiancee and others trapped in the region to the UK.

The refugee, who wanted to remain anonymous for his safety, worked for British forces as a translator for seven years in Afghanistan before moving to the UK.

His fiancee is currently trapped somewhere in the Middle East after escaping central Afghanistan, and he lost his first wife to a Taliban attack in 2016, but later was able to get his children to the UK.

He currently volunteers in the UK at the Afghan and Central Asian Association (ACAA) alongside the RAF veteran he was a translator for in Afghanistan, Rob Campbell.

The Afghan refugee said: “Obviously, I’m not in a stable position, I am extremely worried, that is a safety concern in terms of psychological safety, also we are extremely worried about the people back in Afghanistan.

“People should know there are still people fighting against the Taliban.”

The ACAA has been collecting donations to be sent to refugees currently residing in hotels across London and is assisting people with their visa or refugee applications before sending them to the Home Office.

Nooralhaq Nasimi, the founder of the ACAA, came to the UK in 1999 on the back of a lorry with his children and created the organisation to help refugees integrate into UK society.

The ACAA also offers mental health support for the community, with specific focus on people with relatives still stuck in Afghanistan.

Mr Nasimi said he does not feel the organisation has had much support from the Government in its efforts to help more refugees settle but did commend the evacuation effort.

“I feel slightly disappointed because we are facing a common challenge and when you are working on common challenges there is a need for a common approach, everyone should come together and show their solidarity,” he said.

The Home Office announced plans to admit 20,000 Afghan refugees under the new Afghan Citizens’ Resettlement Scheme and will aim to allow 5,000 into the UK in the first year but has received criticism for not accepting enough.

“They will be hunted down and killed, to say we have five years to bring them here is unrealistic, they won’t last five weeks,” he said.

Since last year, Mr Campbell has been working with the ACAA in England and about 110 volunteers in Afghanistan to enrol women into entrepreneurship and mentorship programmes to enable them to start their own businesses, but they have now been disbanded.

Speaking about the women that were part of this programme, he said: “Like most of the women in Afghanistan, most of them are lying low and have gone into hiding.

“Taliban rule will dictate Sharia law which is not a great thing for any woman but, on a more aggressive level, the Taliban will take women in sex gangs, women trafficking will go up massively in the next couple of months.”

He added: “Our spread is wide throughout the whole of Afghanistan so it is not just Kabul, we are into the Panjshir Valley, Khandahar, Helmand, all over Afghanistan so these people are in small pockets, and are individuals in some cases, so they will hide until we know how to get to them and get them out.”