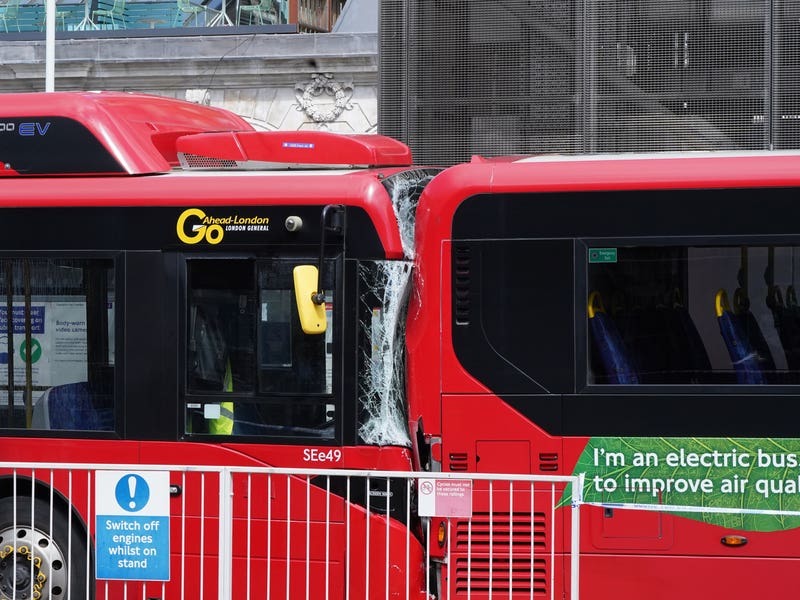 One woman was killed and three people were injured when a bus crashed into the back of another outside a major railway station in central London.

A pedestrian, believed to be in her 30s, was pronounced dead at the scene near Victoria station, police said.

Eyewitnesses said she became trapped under one of the buses.

Police said a total of three pedestrians were involved in the crash which happened at around 8.25am on Tuesday.

The rear bus had a smashed windscreen while the one in front had a crumpled rear bumper.

A witness, who wanted to remain anonymous, was travelling on another bus when she “heard a bang” and saw a woman “underneath” a bus.

She told the PA news agency: “She had a dark floral skirt and blonde hair. Her hand was outstretched. There were a lot of people around her, one lady was holding her hand and a guy was trying to help.

“I honestly hoped she would be okay.”

The witness said the bus she was travelling on left moments later, adding that she and her fellow passengers were left feeling shocked and “helpless”.

Big Issue seller Jacob Davidson, 36, described how passers-by “swarmed” the scene following the crash in an attempt to help.

“It was just a loud bang, the bus smashed into the back of the one in front. The front of it was all smashed in,” he said.

“I didn’t think much of it until two cab drivers stepped out of their cabs, jumped over the railing and started looking under the bus.

“There was a sound of panic… people shouting ‘can we get help’.”

Another Big Issue seller, Danielle Cain, said she “heard a woman scream” and saw “a load of people gathered round”.

She continued: “It was awful, I knew instantly something bad had happened.

“I was told later a woman had got trapped under a bus.”

Two of the casualties were taken to hospital with injuries described by police as “non-life threatening”.

Light blue screens and blue tarpaulins were erected to cover the scene.

Andy Byford, Transport for London’s Commissioner, said: “We are extremely saddened that a woman has tragically died after a collision with a bus and our thoughts are with her family and friends.

“We are thinking of everyone affected by this incident and will support everyone however we can.

“We are working urgently with the operator of the two buses – Go Ahead London – and the police to investigate what happened.”

The bus station was closed.