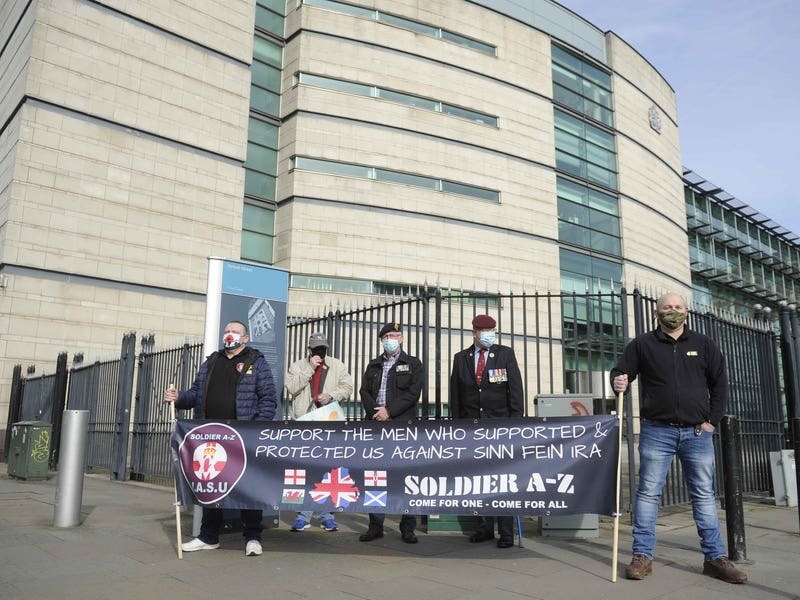 An IRA leader shot dead by paratroopers in Belfast almost 50 years ago had allegedly been responsible for murdering 15 British soldiers, the trial of two veterans has heard.

On-the-run Official IRA commander Joe McCann, 24, was killed in the shooting in the Markets area of Belfast in April, 1972.

Forty nine years later, two former paratroopers, known as soldiers A and C, have gone on trial for his murder at Belfast Crown Court.

On the opening day of the non-jury trial, a prosecution lawyer told judge Mr Justice O’Hara the veterans had not been legally justified in opening fire on Mr McCann as he ran away from them.

“On any view of the facts, the level of force used was unreasonable,” he said.

The pensioners, who will remain anonymous through the case, formally entered not guilty pleas.

Also observing from the public gallery was former UK veterans minister Johnny Mercer, who left the Government last week after expressing frustration at a lack of progress on legislation to protect British veterans who served during the Troubles from prosecution.

The incident in 1972 unfolded on Joy Street when Mr McCann ran away from police and the Army.

Moments earlier he had been involved in a scuffle with a plain-clothed RUC Special Branch officer who had tried to arrest him.

The paratroopers, who had been asked to assist the police arrest, opened fire as he sprinted off, zig zagging from side to side to avoid the shots.

The fatal shot hit him at the bottom of his back.

Reflective of the passage of time since the incident, the prosecution and defence have agreed a series of facts that neither side will dispute through the trial.

The list, which was read to the court on Monday, includes a summary of the police information on Mr McCann’s activities and standing with the Official IRA.

That included intelligence that Mr McCann, who had previously been imprisoned for IRA membership and possession of firearms, was in charge of the Official IRA in the Markets area and was a “skilled gunman” whose modus operandi was to set up ambushes, whereby security forces would respond to pre-planned incidents and he would then shoot at them from cover.

The court heard that Mr McCann was a member of the IRA Army Council who had been on the run from the authorities since the introduction of internment without trial in 1971.

The judge was also told Mr McCann was known for wearing disguises to evade capture, and that security forces assessed he would likely be armed if encountered and would not hesitate to use a weapon to resist arrest.

The agreed facts also referred to open source material on Mr McCann’s alleged paramilitary activities, including involvement in the bombing of the Parachute Regiment’s barracks in Aldershot – an attack that killed seven people; the attempted murder of Stormont home affairs minister John Taylor; and the murder of Provisional IRA member Charlie Hughes during a feud with the Official IRA.

According to the evidence provided at the time of the shooting by the Special Branch officer who tried to arrest Mr McCann, the republican was “at the very top of the three-star list of people who were wanted for arrest”.

Soldiers A and C had been manning one of several checkpoints set up in the Markets on the day.

The policeman had approached them to alert them that Mr McCann had been spotted and asked for assistance as he was going to try to detain him.

Moments later, the officer encountered Mr McCann at the junction with Little May Street and a scuffle ensued. Mr McCann evaded capture and ran away down Joy Street.

The Crown lawyer said that at that point, soldiers A and C, and another now deceased paratrooper, soldier B, opened fire.

The court heard that Mr McCann sustained three bullet wounds, two of which may have been caused by one round.

One of the three wounds – caused by a round that entered his buttock and travelled upward through his trunk – was the fatal one.

However, he noted that the judge, Mr Justice O’Hara, would also have the option of alternative verdicts of attempted murder or attempted wounding with intent.

The soldiers provided statements to the Royal Military Police following the shooting and were not subject to any legal or disciplinary action at that point.

The case was reinvestigated by the police’s now defunct historical inquiries team in 2010, at which point the veterans provided voluntary statements and were then interviewed under caution.

In their accounts of the events, both soldiers insisted warnings were issued to Mr McCann such as “halt” and “stop”, but that he continued to run away.

They said soldier B opened fire first, shooting two rounds above Mr McCann by way of a warning.

Both former paratroopers said they subsequently fired at the suspect as he made off.

In their 2010 statements, both soldiers insisted they used “reasonable force in all circumstances”.

“Both soldiers shot Mr McCann in order to stop him from getting away and avoiding being arrested,” he said.

“The prosecution case is that in all circumstances that shooting was not legally justified.”

In legal exchanges over disclosure issues prior to the Crown’s opening statement, a lawyer representing soldier A insisted the force used was reasonable.

She said Mr McCann was suspected of involvement in murders and could have committed more if he had evaded arrest.

The defence lawyer said the soldiers faced a “binary choice” of either firing to effect the arrest or Mr McCann getting away.

The first witness to give evidence to the trial was former delivery driver Alexander Worland, who had given Mr McCann a lift in his van earlier that day.

He had been in a shop in the Markets area and the shop owner pointed out that Mr McCann was in the back kitchen of the property.

The court heard that Mr McCann was in disguise, wearing glasses and dark hair.

The shop owner asked the driver if he could give a lift to Mr McCann, who exited the shop by going over a wall in the backyard.

The driver said he then picked him up. He said he drove in the direction of the nearby Short Strand area and Mr McCann then asked to be dropped off.

The driver said he then returned to the shop and a short time later he heard shots ring out nearby.

He went to the scene and saw Mr McCann lying fatally wounded on the street.

Asked by a defence lawyer whether he thought Mr McCann was on an operation, given his disguise, the witness said: “I have no idea where he was going or what he was doing.”

On the first day, the court also heard from Sean Bannon, who was on his way to a bar in the area when he witnessed the incident unfold on Joy Street, and Joseph Donaldson, who was 10 at the time of the shooting and arrived on the scene in the immediate aftermath.

The trial will continue on Tuesday when some legal issues are to be addressed by the parties.