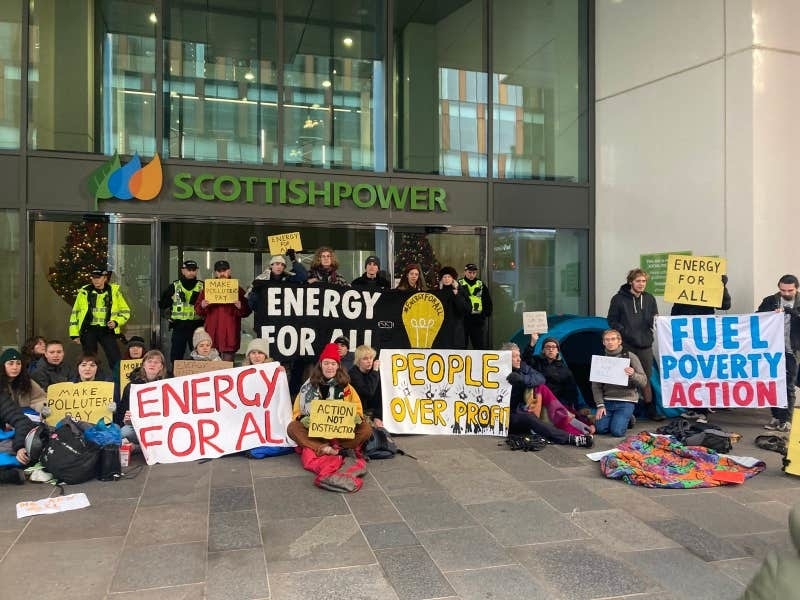 Campaigners have staged protests in buildings including the British Museum and Scottish Power HQ against rising energy bills and “sky-rocketing” levels of fuel poverty, according to organisers.

Members of the grass-roots movements Don’t Pay UK and Fuel Poverty Action said campaigners had bedded down with blankets, sleeping bags and hot water bottles in the foyer of the Glasgow-based energy company at around 9am.

Another “warm-up” demonstration saw a group of activists enter the British Museum’s great hall – the largest indoor public square in Europe – where they also protested against the museum’s sponsorship links with oil giant BP, according to Don’t Pay UK.

Footage of the protest showed museum visitors watching in the background as a group of campaigners sat in a circle on the floor and one thanked “XR rebels, Don’t Pay UK, Fuel Poverty Action, Disability Action” for “highlighting this cost-of-living crisis”.

A third group was also expected to occupy the Westfield shopping centre in Stratford, east London.

The group said the demonstrations were being held as part of the National Day of Action on fuel poverty, Don’t Pay UK, Fuel Poverty Action and other climate and community organisations.

In Hastings, campaigners will enter a branch of Barclays due to the bank’s investments in fossil fuels which they said are exacerbating both energy prices and the climate crisis.

Other warm-up protests will take place at a shopping centre in Manchester, and in Liverpool, Brighton and Bristol.

Neil Smith, a spokesperson for the Don’t Pay campaign, said: “No one should go cold in winter, yet what we’re seeing is a mass default on these extortionate energy bills and thousands set to freeze in their homes.

“While the Government stands by, we’re coming together in our communities to fight back and keep each other warm.”

The groups are demanding the government immediately tackle the energy and cost-of-living crisis by introducing Energy For All, defined as “a universal, free band of energy to cover people’s necessities”.

This would be paid for by “ending all public money subsidising fossil fuels, a more effective windfall tax on energy companies and higher tariffs on luxury household energy use.”

Stuart Bretherton, Fuel Poverty Action campaign coordinator, said: “Energy For All would achieve what our energy system and economy should ultimately be geared towards, ensuring everyone’s basic needs are met.

“Ordinary people cannot keep footing the bill for crises created by the wealthy, it’s time for the big polluters and profiteers to pay their share.

“Through this we could also incentivise much needed climate action on home insulation and a transition to renewables.”