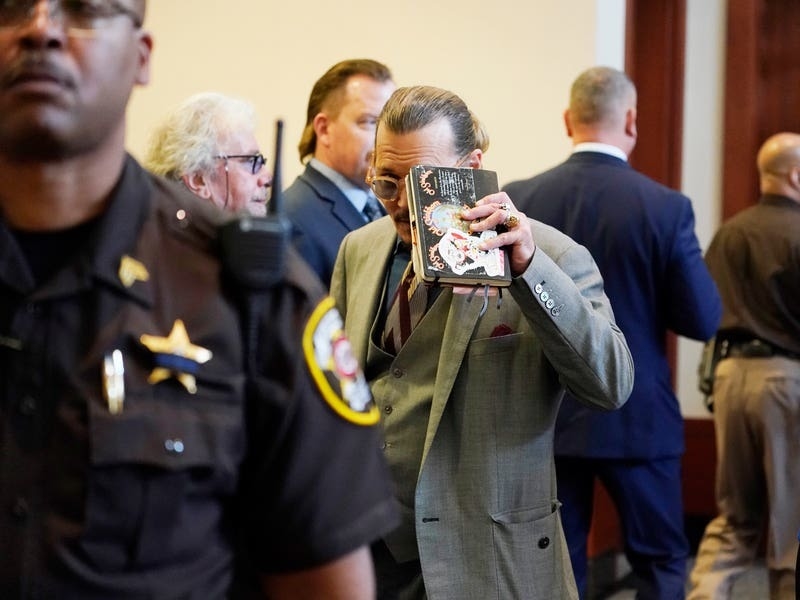 Johnny Depp is fulfilling a promise he made to Amber Heard that she will “never see his eyes again” after accusing him of being an abuser, a US court has heard.

The Aquaman star again denied Mr Depp had been the victim in their violent relationship, and reiterated that her 2018 article had not been about him, as she continued giving evidence on Monday.

Mr Depp is suing Ms Heard over the piece she wrote in The Washington Post, which his lawyers say falsely implies he physically and sexually abused her while they were together.

He has denied all accusations.

“He promised you, you would never see his eyes again,” Ms Vasquez said.

“He cannot look at me. He can’t,” Ms Heard replied.

Asked about her accusations that Mr Depp was an abuser, the actress continued: “He is an abuser… and you can look either of us up online and see who’s being abused.”

Ms Heard later admitted that there were no medical records to show that she had suffered the injuries she had previously described as having suffered at the hands of Mr Depp, including being violated with a bottle during an incident in Australia in March 2015.

She was questioned by Ms Vasquez about the lack of visible injuries following several incidents, with red carpet photos shown to the jurors, and why she had not yet donated her seven million dollar (£5.7 million) divorce settlement to charities.

She also denied that her “new boyfriend,” Tesla founder Elon Musk, had paid part of the settlement for her.

Concluding her direct evidence earlier on Monday, Ms Heard said that the only person that believes that her op-ed article is about Mr Depp “ironically, is Johnny”.

“The only one who thought it was about Johnny is Johnny,” she told the court.

“It’s about me, it’s about what happened to me after Johnny… after I escaped my marriage.

“It’s about me and my life and what I endured once I moved on with my life. The only one who made it about him, ironically, is Johnny.”

Becoming visibly emotional, she added: “I want to move on with my life… I want Johnny to move on.”

She also said she feared she would “literally not survive” her relationship with the actor, as violent episodes between them became more and more normal.

The actress told the court how she had been desperate for a “good night’s sleep” and repeatedly asked members of Mr Depp’s security team not to let him into the property while she was there overnight.

She said her anxiety had caused her to lose hair and weight and have regular panic attacks.

She said the actor had become “delusional” when asked about the incident, which happened in April 2016, shortly after her 30th birthday.

The court heard Mr Depp had discovered faecal matter on a bed at one of his properties in Los Angeles and had called Ms Heard about the matter.

“I don’t think that’s funny, I don’t know what grown woman does. I was also not in a pranking mood,” Ms Heard said.

The court heard a suggestion that the faecal matter had come from Mr Depp’s Yorkshire terrier Boo, which had “bowel control issues” after ingesting some of the actor’s marijuana as a puppy.

Long queues continued to appear outside Fairfax County district courthouse, in Virginia, with some members of the public having queued overnight for a chance to get into the courtroom to observe the proceedings.

Mr Depp has already given evidence and faced cross-examination and has alleged that he was a victim of domestic abuse during the relationship.