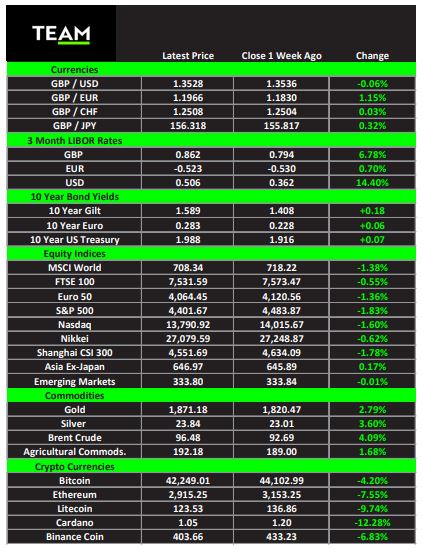 GLOBAL stocks fell last week over fears of red-hot inflation and warnings of an imminent Russian attack on Ukraine. The blue-chip S&P 500 and technology-focused Nasdaq fell 1.8% and 1.6% respectively and the FTSE 100 by 0.6%.

It was revealed US consumer-price inflation rose 7.5% in January from a year earlier, the biggest annual increase in 40 years. Higher food, electricity and accommodation costs are denting consumer sentiment and the report puts more pressure on the Federal Reserve to take much tougher measures to curb inflation.

The Fed is now expected to start hiking interest rates next month.

The Bank of England has already embarked on a rate-hiking cycle and the read across from the US has led futures markets to price in the BoE’s base rate reaching 2% by year end.

Higher inflation and interest rates are kryptonite for bonds, which normally attract inflows at times of heightened geopolitical risk. UK government bonds have fallen more than 6% year-to-date. Other traditional safe-haven assets fared much better last week, including precious metals such as gold (+2.8%) and silver (+3.6%).

The noise over inflation and Ukraine distracted from some upbeat corporate earnings. Oil major BP, buoyed by soaring energy prices, reported a profit of $12.8 billion for 2021, its highest in eight years and a big turnaround from a $5.7 billion loss in the previous year.

Higher revenues enabled BP to reduce its net debt by more than $8 billion to $30.6 billion and it intends to buy back $1.5 billion of shares this year using surplus cash. BP shares are up more than 20% year-to-date.

However, shareholder-friendly initiatives at a time when many households in the UK face a cost-of-living crisis did not go unnoticed and prompted renewed calls from opposition political parties for an oil and gas sector windfall tax on profits. Last week, the regulator Ofgem announced it would raise the price cap on average household energy tariffs by 54% to £1,971 in April.

Walt Disney shares jumped after the entertainment company’s earnings beat analysts’ forecasts on the back of record holiday season revenues at its theme parks and new subscriptions to its Disney+ streaming platform.

Visitors were not put off by price hikes and longer wait times at its Disney World and Disneyland theme parks and advance bookings suggest demand from international travellers for the year ahead is recovering fast.

New content, including The Book of Boba Fett and The Beatles: Get Back, helped Disney+ add nearly 12 million subscribers in the fourth quarter and chief executive Bob Chapek predicted future releases, such as Obi-Wan Kenobi, will keep it on track to reach its target of 230 to 260 million by 2024, ahead of Netflix’s current subscriber base of around 220 million.

Brent crude climbed to $96 a barrel, its highest level in more than seven years, as markets priced in the increased risk of a conflict in Ukraine. Supply, already tight due to OPEC+ production caps and underinvestment in recent years, would be no doubt disrupted further in such a scenario, especially with the US and Europe threatening sanctions.

Cryptocurrencies gave back some of their recent gains as investors fled more speculative assets in the risk-off trading environment. Bitcoin and Ethereum fell by 4.2% and 7.5% respectively.

In a sign of changing times, cryptocurrency company advertisements, featuring celebrities Larry David and LeBron James, were prominent during Sunday’s Super Bowl. Coinbase’s app crashed due to a flood of traffic after its ad offered free Bitcoin to new sign-ups.