ARE you the type of reader who opens the newspaper and turns immediately to the daily cartoon for a little light relief?

If you are, then you will have much in common with Cameron McPhail for, when it comes to cartoons, the founder of the Kartoon Faktory has a stock of thousands of them.

Life in the laughter lane was not, however, the career path that originally beckoned for Cameron. The more staid and fusty corridors of the academic world proved to be his early stamping ground and, indeed, from 1975 until 1978 he could be found at Glasgow University where he worked as a researcher and member of the academic staff in the university’s Department of Social and Economic Research. A fitting role for a man with an MBA in Finance, a phD in Economics and an MA (Hons), also in Economics.

Such impressive qualifications led, inevitably, to a lengthy spell in the finance industry and at the Royal Bank of Scotland he occupied a number of high-profile posts, including those of chief executive of the Wealth Management Division, chief executive of Royal Bank of Scotland International, Jersey – a position that he held from 1995 until 2000 – and director of change management, Edinburgh.

But it was when he became a co-founder and investor in a company called Jersey Plants Direct, which, since setting up in 2005 has grown into one of Europe’s largest mail order and online plug plant businesses, that a way into the anarchic world of satirical cartoons unexpectedly opened up.

‘We had offices on Pier Road and one day I saw this guy, who was working in our call centre, doodling on a pad as he talked on the phone,’ Cameron explained. ‘I realised that he was actually very artistic and I said to him: “I have some ideas. Could you draw the pictures that I am thinking about?”’

The talented doodler was Oli Nightingale and, before long, he found himself committing to paper the humorous images that were constantly swimming around in Cameron’s fertile imagination. It was dictation, in a sense, but of pictures rather than words.

‘This all started some ten years ago but it was very part-time at first,’ Cameron said. ‘Then, five years ago, we became a resident cartoonist in the Jersey Evening Post with a weekly slot.

‘I thought up the Kartoon Faktory name and started to become more prolific in terms of opportunities for cartoons.’

Newspapers and magazines are, of course, obvious outlets for the cartoonist’s art, but in today’s world there is scope for so much more and the Kartoon Faktory’s subtle digs at the vagaries of modern life can be found in books and on tea towels, aprons, fridge magnets and mugs to name just a few of the many and varied canvasses available to the team.

‘Technology was developing rapidly,’ said Cameron, ‘and we were able to set up an online shop using various apps. We found that we could have thousands of people on the site at the same time and with broadband becoming better and better, it wouldn’t slow down. It was like an industrial revolution in technology.’

In fact, a printing revolution was under way, in terms of both type and quality. It was spearheaded by the arrival of ‘print on demand’.

‘PoD was a real game changer,’ Cameron enthused. ‘It meant that there was no longer a need for expensive warehousing in which to carry stock. You simply place an order and it goes to a printer in the UK and it works equally well for small quantities and even for one-off products.

‘One printer might specialise in mugs, while others might be specialists in T-shirts, aprons, fridge magnets and so on. The arrival of the Covid pandemic rather hastened the development of the PoD industry and now it is based all over the UK.’

Satire is certainly the staple diet of the Kartoon Faktory’s source of creativity, with high-profile events in the worlds of politics and business providing much inspiration. One famous cartoon shows the Tooth Fairy undergoing interrogation from two Financial Services Commission heavies about the origins of her funds. That particular drawing was unashamedly inspired by the effect of the Know Your Customer legislation on the Island’s finance industry. For Cameron, though, it seems that there is no shortage of suitable targets.

‘Some ideas just occur, while others will be designed to a theme,’ he revealed. ‘They swim around in a low level of consciousness. It’s almost like a sort of dream and you don’t always know where they have come from.

‘The image always comes first. After that, you have to write captions that are really short and pithy. If you find that you have a 15-word caption then forget it; the shorter it is, the better and more effective it will be.’

Not all of the Kartoon Faktory’s material carry a Jersey theme however. Donald Trump, not surprisingly, came in for a fair amount of gentle lampooning, and a number of cartoons have also been inspired by the Scottish tennis player Andy Murray.

But then, there is a little fascinating history here. As a self-confessed tennis enthusiast, Cameron came across the future Wimbledon ace when he was a champion in the under-14 team. Using his influence at the Royal Bank of Scotland, he decided to attempt to secure sponsorship for the rising star. The bank, which at the time focused its attention on golf and Formula One, initially offered little encouragement.

Its view on tennis-playing youngsters was jaundiced, to say the least. ‘They’re not as good as their parents think they are,’ was just one of several comments in similar vein that Cameron received.

His persistence, however, eventually paid off – something for which Judy Murray, Andy’s mother, remains very grateful.

‘I met Cameron many years ago when he worked with RBS,’ she told the JEP. ‘I was looking for sponsorship for Andy as he was training in Spain and approached the bank.

‘Luckily, Cameron was a big tennis fan and he persuaded RBS to take a punt on him. They gave us £10,000, which was a lifeline back then as it paid for a third of a year’s training and competition costs, but it led to a long-term involvement between Andy and the bank.

‘Cameron became a great friend and ally of the family and, since then, has attended many of the boys’ significant victories, including the Davis Cup Final in Ghent in 2015.’

To this day, Clan Murray cartoons are used to raise money for Judy Murray’s foundation.

If you have the right sort of imagination, then, it would seem that almost everywhere you look there is a suitable topic just crying out for comic interpretation. Lateral thinking must play a vital part here; Cameron, however, is not so sure.

‘I would say that it’s more a case of thinking absurdly rather than laterally,’ he said. ‘You obviously have to be able to find the topic but there are very few from which a cartoon can’t be made. But you don’t lampoon weaknesses. I believe that there are certain subjects that are very much off limits.

‘The Charlie Hebdo [French satirical magazine] cartoons ridiculing the Prophet Mohammed, for instance, were absolutely disgraceful. Woke culture is also difficult to lampoon. Some of it is so bizarre that it is not really mockable. I just don’t go there.’

In common with all those who dip into the deep comedic well for a living, cartoonists have to keep themselves up to date with current affairs. A sense of awareness of what is going on around you is, Cameron stresses, essential.

‘You have got to have quite a wide general knowledge. You have to know what politicians are up to, what is happening within the finance industry and so much more.

‘You also have to be prepared to sacrifice your young, by which I mean that what seems like a great idea in the morning could well appear clumsy after you have given it more thought during the day. You may love it – just as you love your children – but if it doesn’t work, then I’m afraid that it has to go.’

Anyone who works in a creative industry is bound to have a degree of respect and possibly even admiration for others in the same field. Cartoonists are no different and Cameron readily alights on one in particular.

‘I always look at Private Eye and in fact we have had our cartoons published in that magazine three or four times now – not a bad achievement when you consider how many thousands of cartoons that they have submitted to them for each edition.’

For Cameron, though, the Kartoon Faktory provides an opportunity to take the concept of the satirical cartoon to a new level; to give it a prominence and an identity that elevates it beyond the role of a mere drawing in the printed media.

‘I think that we have redefined the cartoon,’ he said. ‘Ours are very well-drawn and artistic. The old model of the cartoon was really as a filler in a magazine or newspaper.

‘But our cartoon is the product itself; it is not just a by-product.’ 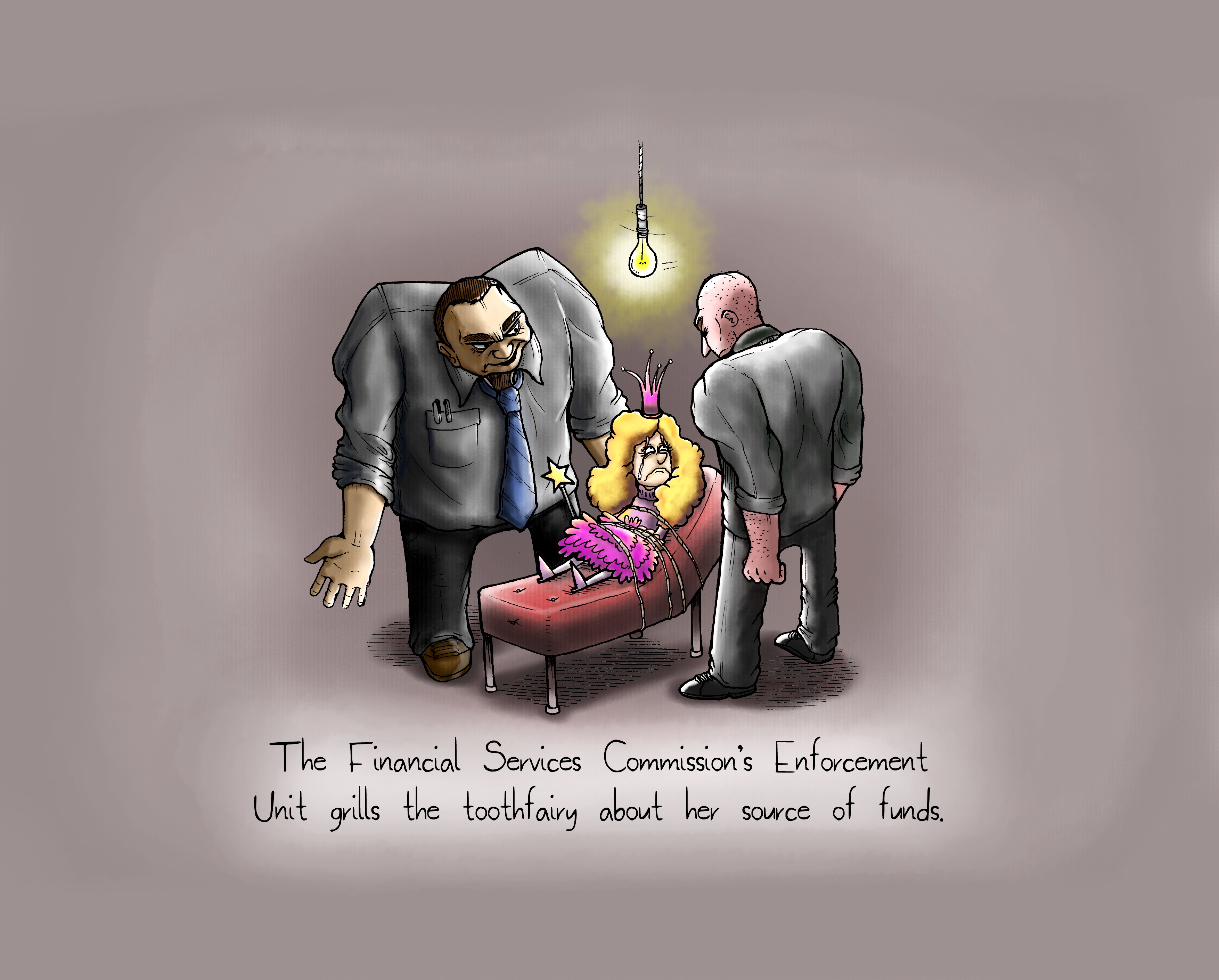 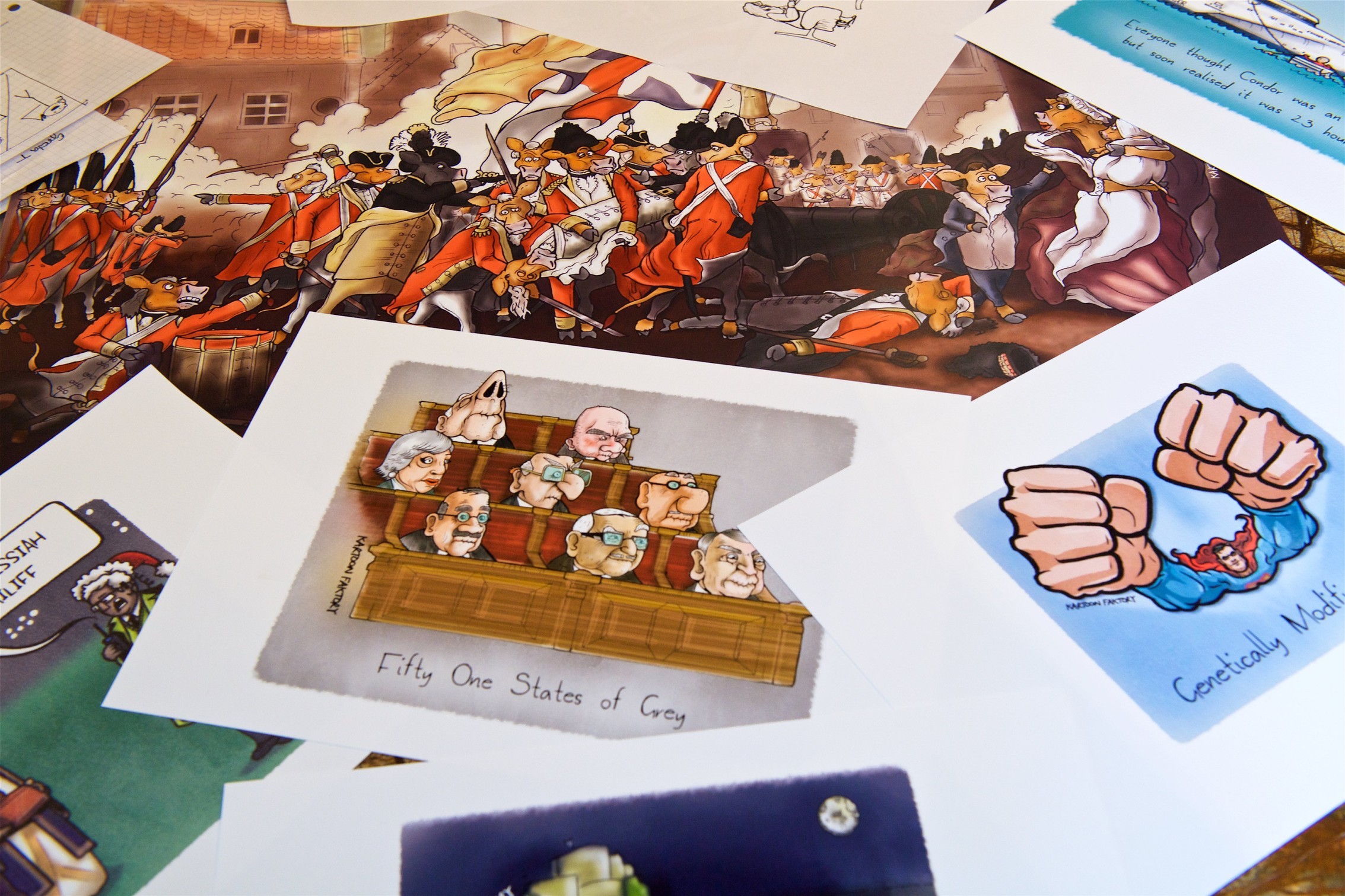